Microeconomics - The Costs of Production

In this chapter, we examine firm behavior in more detail. This topic will give you a better understanding of the decisions behind the supply curve. In addition, it will introduce you to a part of economics called industrial organization — the study of how firms’ decisions about prices and quantities depend on the market conditions they face.

We begin our discussion of costs at a Cookie factory. By examining some of the issues that the owner faces in his/her business, we can learn some lessons about costs that apply to all firms in an economy.

To see how a firm goes about maximizing profit, we must consider fully how to measure its total revenue and its total cost. Total revenue is the easy part: It equals the quantity of output the firm produces times the price at which it sells its output. By contrast, the measurement of a firm’s total cost is more subtle.

Imagine that the owner of the cookie factory is skilled with computers and could earn ¥100 per hour working as a programmer. For every hour that she works at her cookie factory, she gives up ¥100 in income, and this forgone income is also part of her costs. The total cost of her business is the sum of the explicit costs and the implicit costs.

The Cost of Capital as An Opportunity Cost

An important implicit cost of almost every business is the opportunity cost of the financial capital that has been invested in the business. Suppose, for instance, that the owner of the cookie factory used ¥300,000 of her savings to buy her cookie factory from its previous owner. If she had instead left this money deposited in a savings account that pays an interest rate of 5 percent, she would have earned ¥15,000 per year. To own her cookie factory, therefore, Caroline has given up ¥15,000 a year in interest income. This forgone ¥15,000 is one of the implicit opportunity costs of Caroline’s business.

Economic profit is an important concept because it is what motivates the firms that supply goods and services. As we will see, a firm making positive economic profit will stay in business. It is covering all its opportunity costs and has some revenue left to reward the firm owners. When a firm is making economic losses, the business owners are failing to earn enough revenue to cover all the costs of production. Unless conditions change, the firm owners will eventually close down the business and exit the industry. To understand business decisions, we need to keep an eye on economic profit.

Economic profit equals to zero means your business is running well and you pay yourself the same amount as you get paid somewhere else.

Table 1 shows how the quantity of cookies produced per hour at the cookie factory depends on the number of workers. This relationship between the quantity of inputs (workers) and quantity of output (cookies) is called the production function. 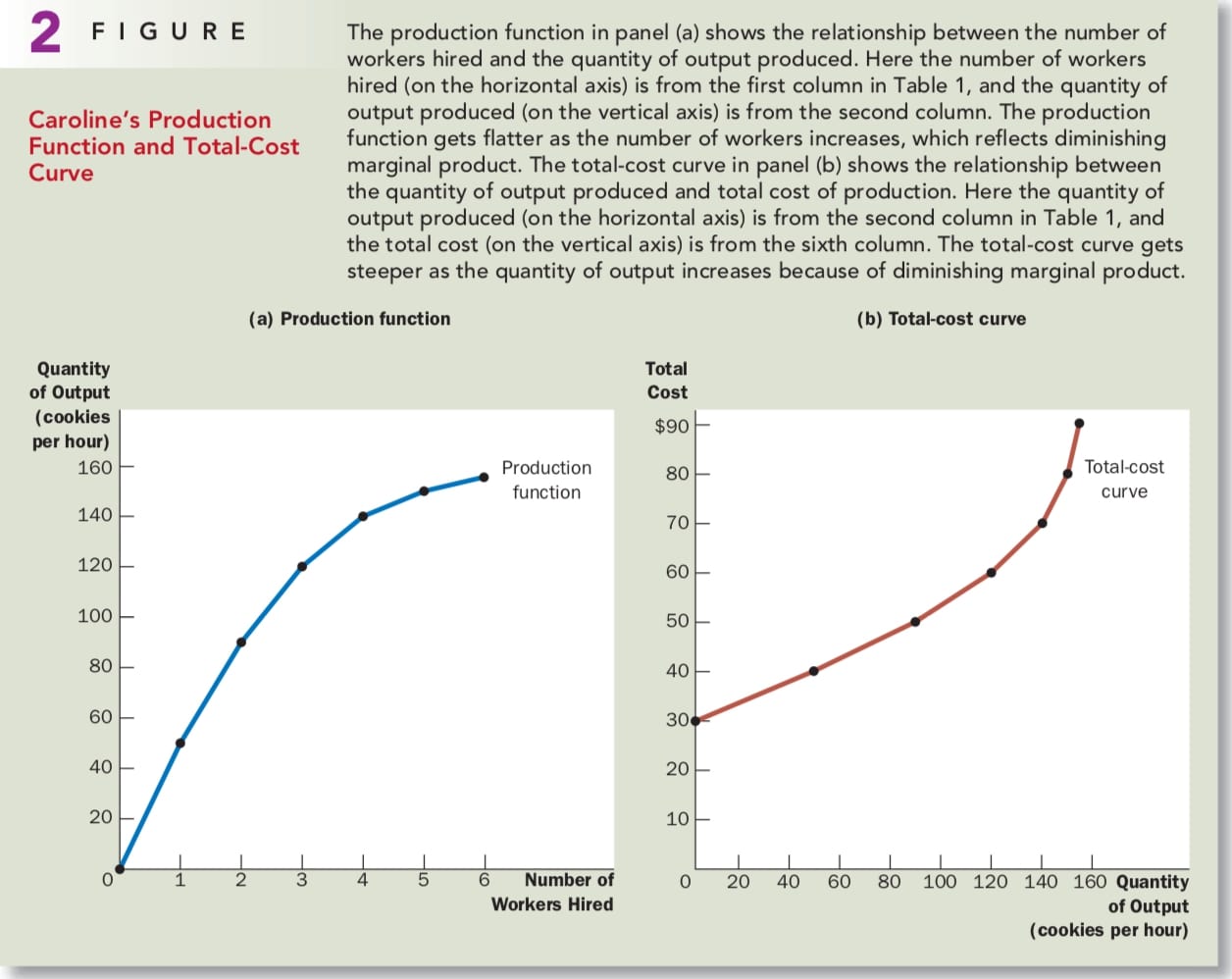 From The Production Function To The Total-Cost Curve

Our goal in the next is to study firms’ production and pricing decisions. For this purpose, the most important relationship in Table 1 is between quantity produced and total costs. Panel (b) of Figure 2 graphs these two columns of data with the quantity produced on the horizontal axis and total cost on the vertical axis. This graph is called the total-cost curve.

THE VARIOUS MEASURES OF COST 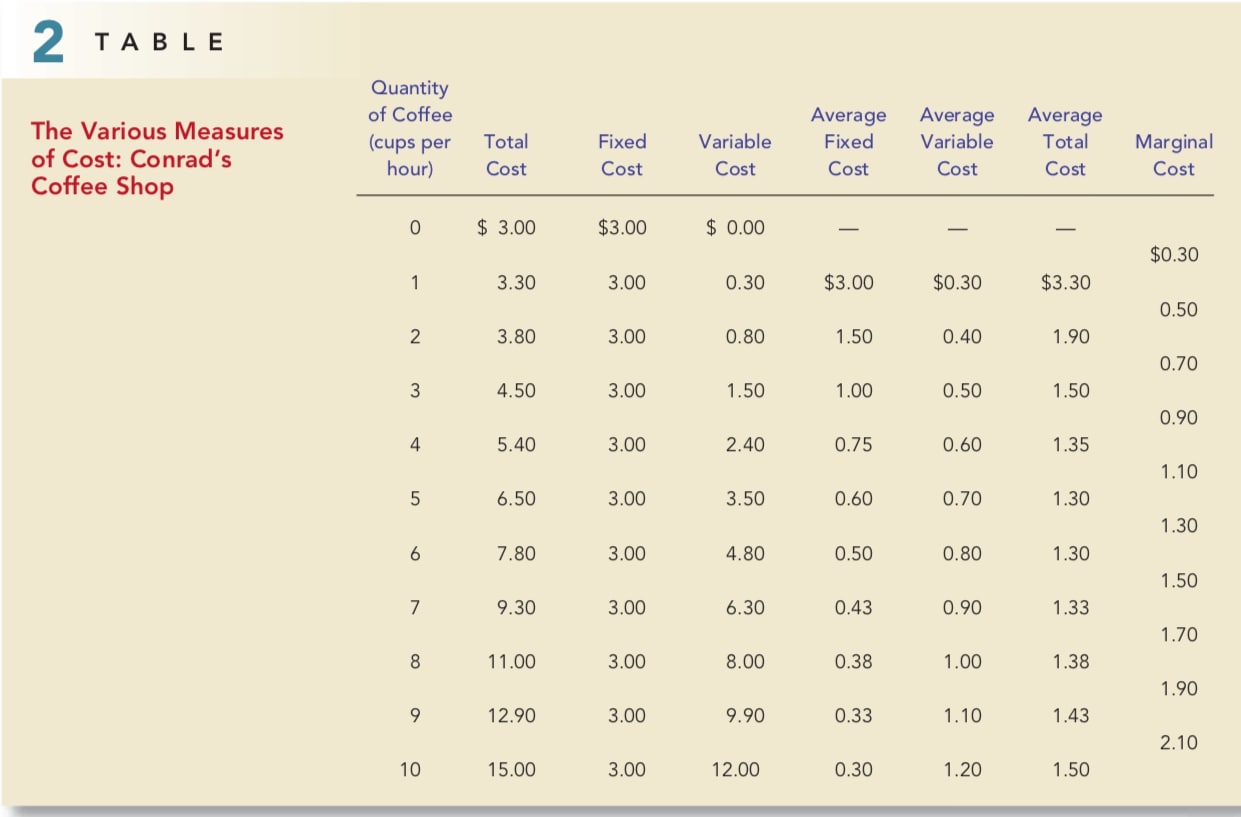 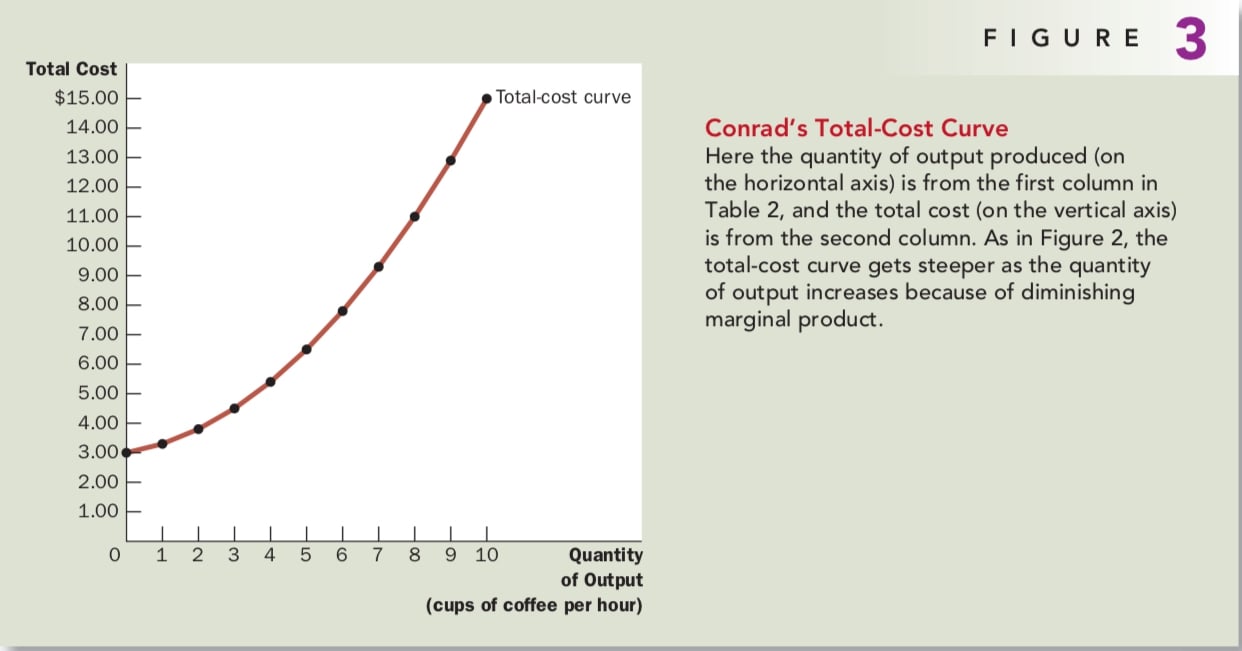 Fixed costs are costs that do not vary with the quantity of output produced. They are incurred even if the firm produces nothing at all. Conrad’s fixed costs include any rent he pays because this cost is the same regardless of how much coffee he produces.

Variable costs are costs that change as the firm alters the quantity of output produced. Conrad’s variable costs include the cost of coffee beans, milk, sugar, and paper cups: The more cups of coffee Conrad makes, the more of these items he needs to buy.

Cost Curves And Their Shapes 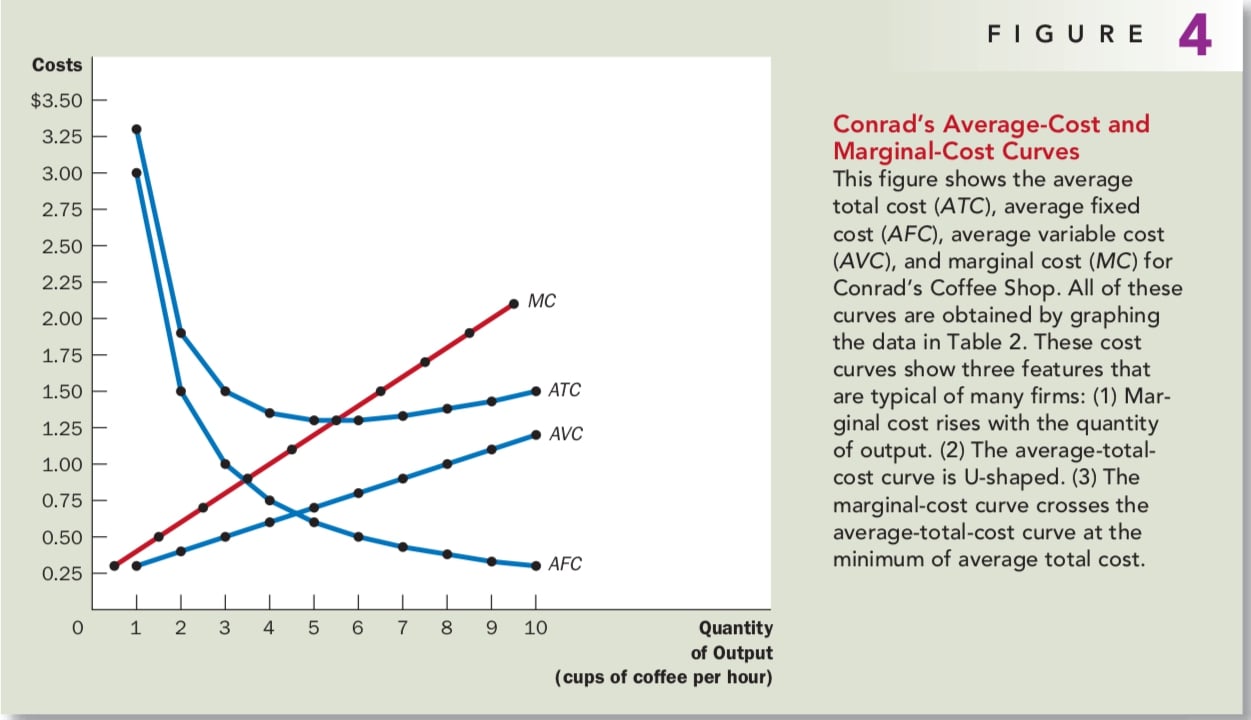 Rising Marginal Cost Conrad’s marginal cost rises with the quantity of out- put produced. This reflects the property of diminishing marginal product. 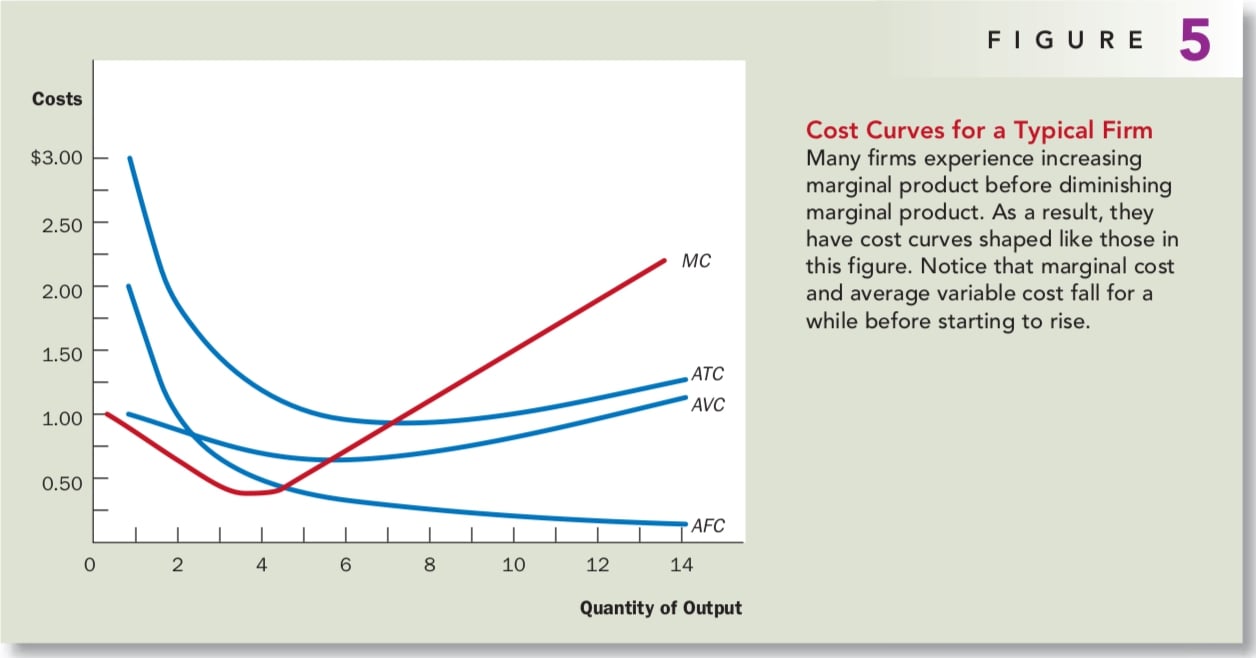 Actual firms are usually more complicated than what we talked about before. In many firms, marginal product does not start to fall immediately after the first worker is hired. Depending on the production process, the second or third worker might have a higher marginal product than the first because a team of workers can divide tasks and work more productively than a single worker. Firms exhibiting this pattern would experience increasing marginal product for a while before diminishing marginal product set in.

Figure 5 shows the cost curves for such a firm, including average total cost (ATC), average fixed cost (AFC), average variable cost (AVC), and marginal cost (MC). Despite these differences from our previous example, the cost curves shown here share the three properties that are most important to remember: 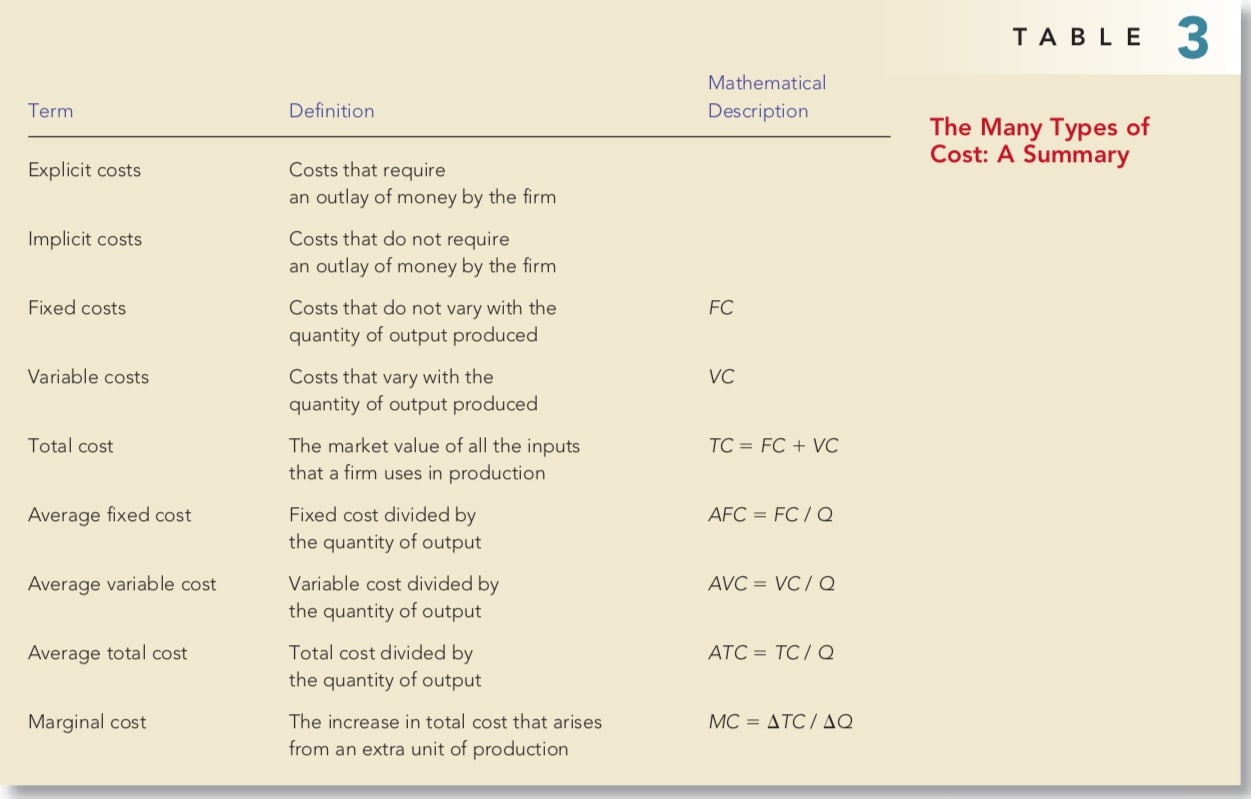