Microeconomics - Consumers, Producers, and the Efficiency of Markets

In this chapter, we take up the topic of welfare economics, the study of how the allocation of resources affects economic well-being. This analysis leads to a profound conclusion: The equilibrium of supply and demand in a market maximizes the total benefits received by buyers and sellers.

Say John, Paul, George, and Ringo willing to buy an old album. Table 1 shows the maximum price that each of the four possible buyers would pay. The table in Figure 1 shows the demand schedule that corresponds to Table 1. 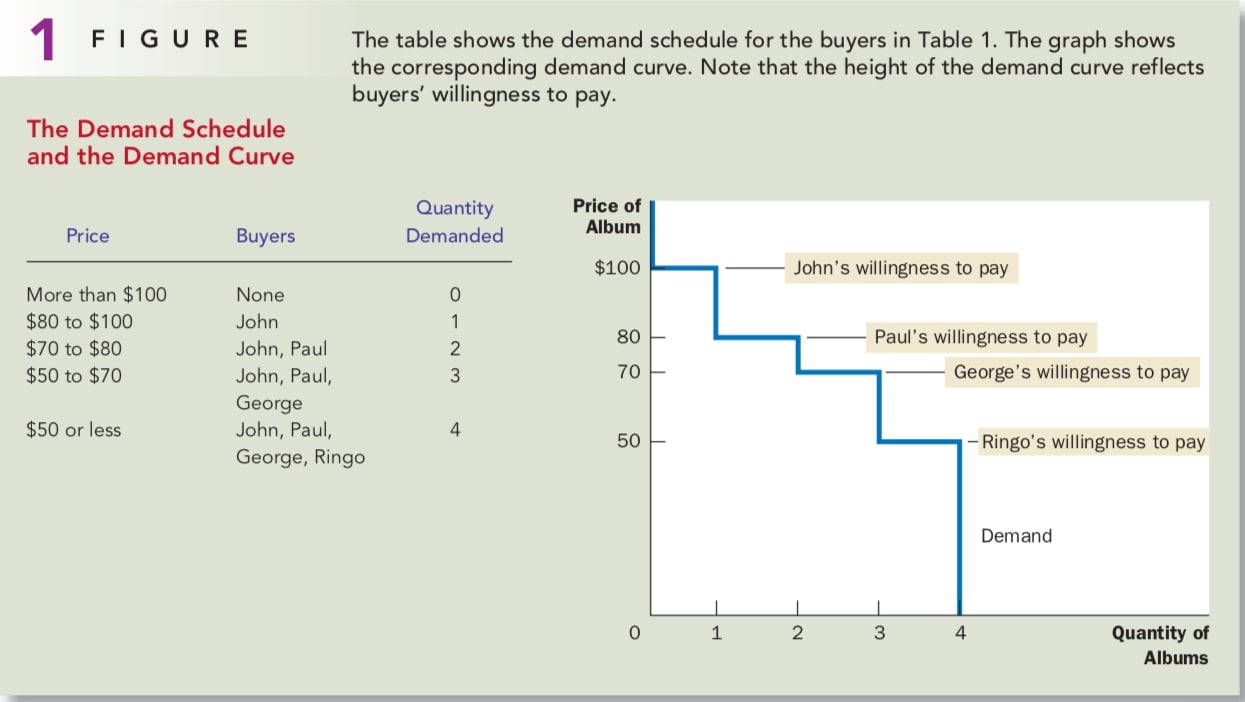 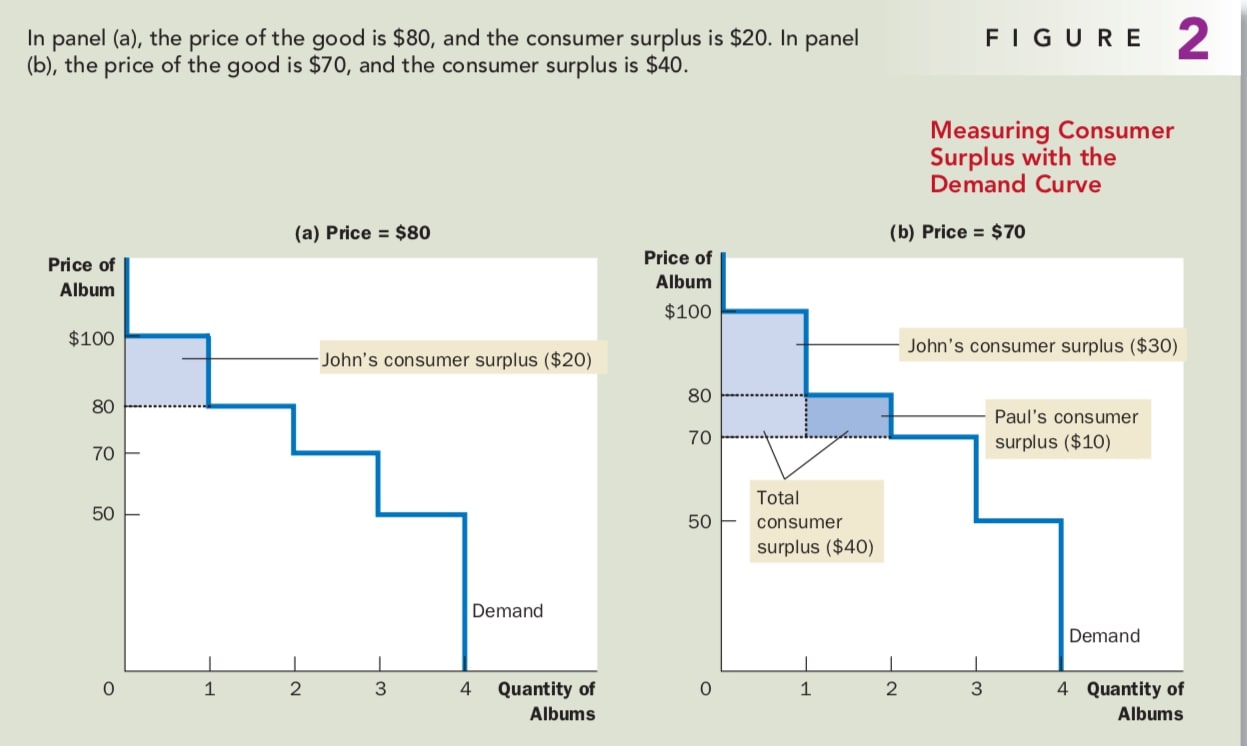 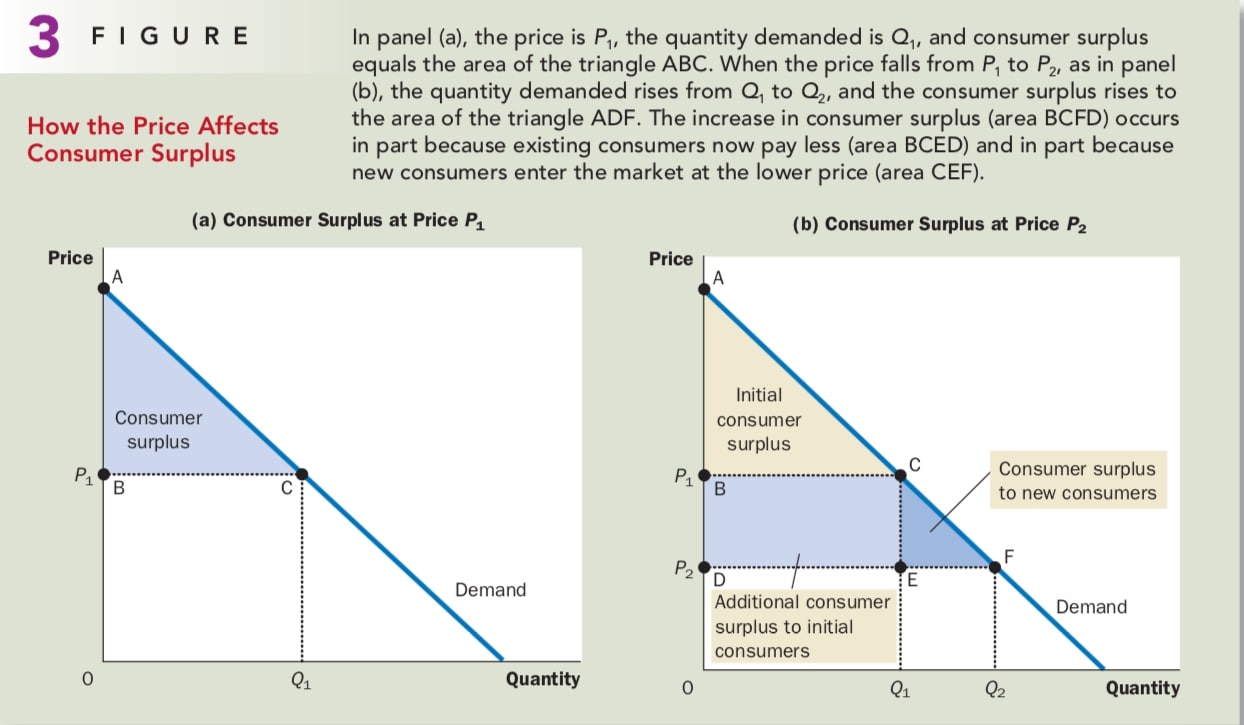 Figure 3 shows a typical demand curve. In panel (a), consumer surplus at a price of P1 is the area of triangle ABC. Now suppose that the price falls from P1 to P2, as shown in panel (b). The consumer surplus now equals area ADF.

What Does Consumer Surplus Measure?

Cost And The Willingness To Sell

Say there are four painters, Mary, Frida, Georgia, Grandma, compete for painting a house. Table 2 shows the costs of them. 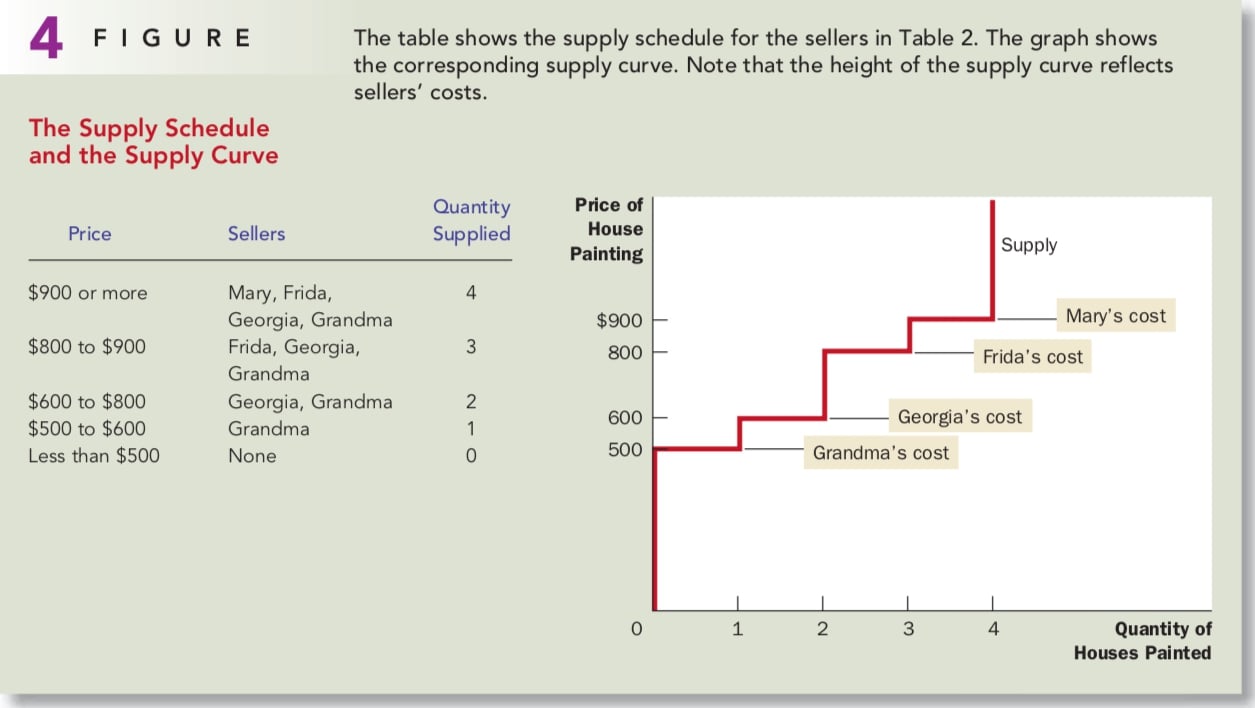 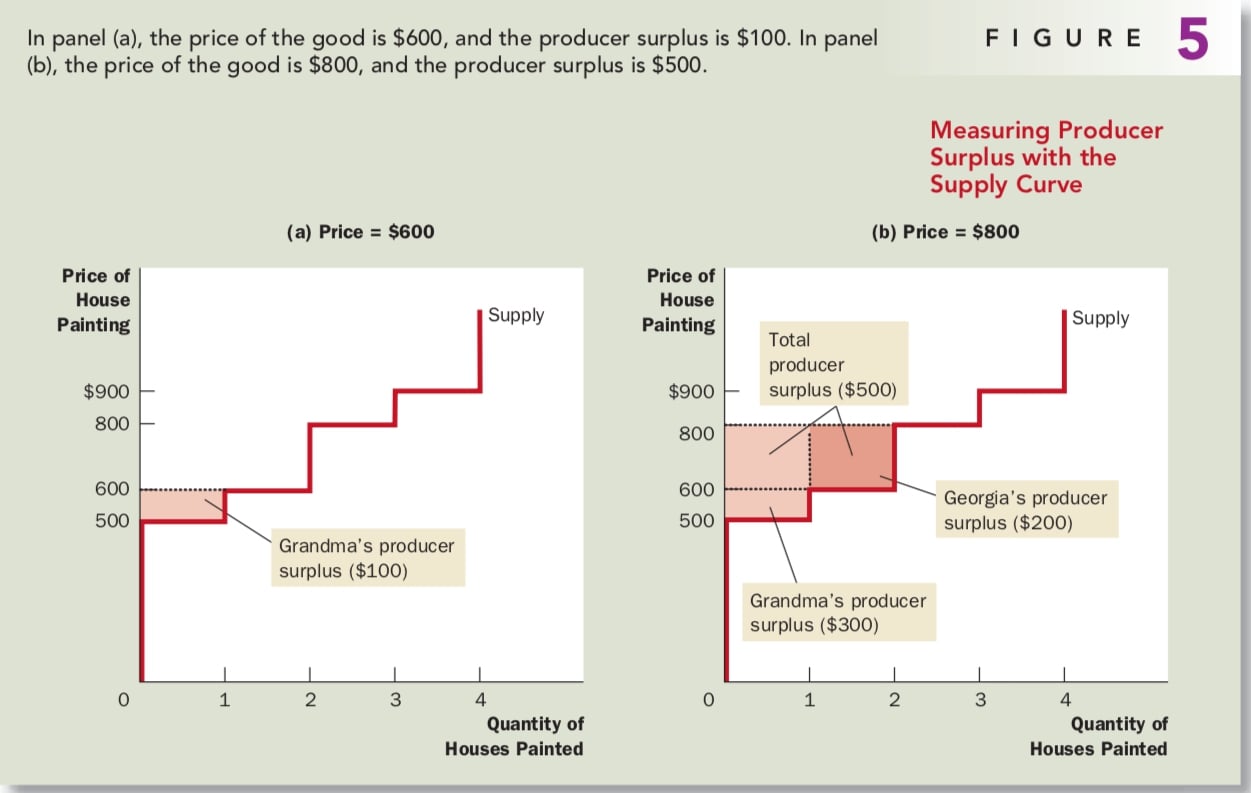 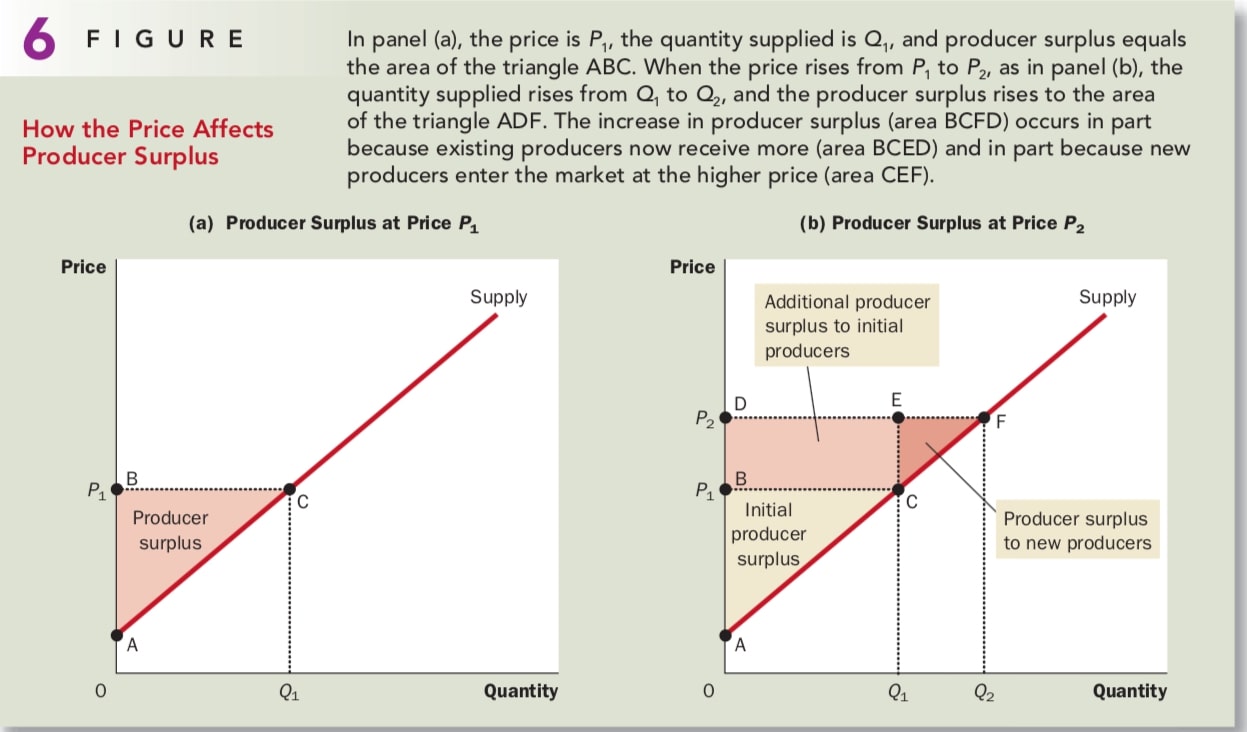 Figure 6 shows a typical upward-sloping supply curve that would arise in a market with many sellers. In panel (a), the price is P1, and producer surplus is the area of triangle ABC. Panel (b) shows what happens when the price rises from P1 to P2. Producer surplus now equals area ADF.

One possible way to measure the economic well-being of a society is the sum of consumer and producer surplus, which we called total surplus. Consumer surplus is the benefit that buyers receive from participating in a market, and producer surplus is the benefit that sellers receive. It is therefore natural to use total surplus as a measure of society’s economic well-being.

Total surplus in a market is the total value to buyers of the goods, as measured by their willingness to pay, minus the total cost to sellers of providing those goods. If an allocation of resources maximizes total surplus, we say that the allocation exhibits efficiency.

In addition to efficiency, the social planner might also care about equality— that is, whether the various buyers and sellers in the market have a similar level of economic well-being. 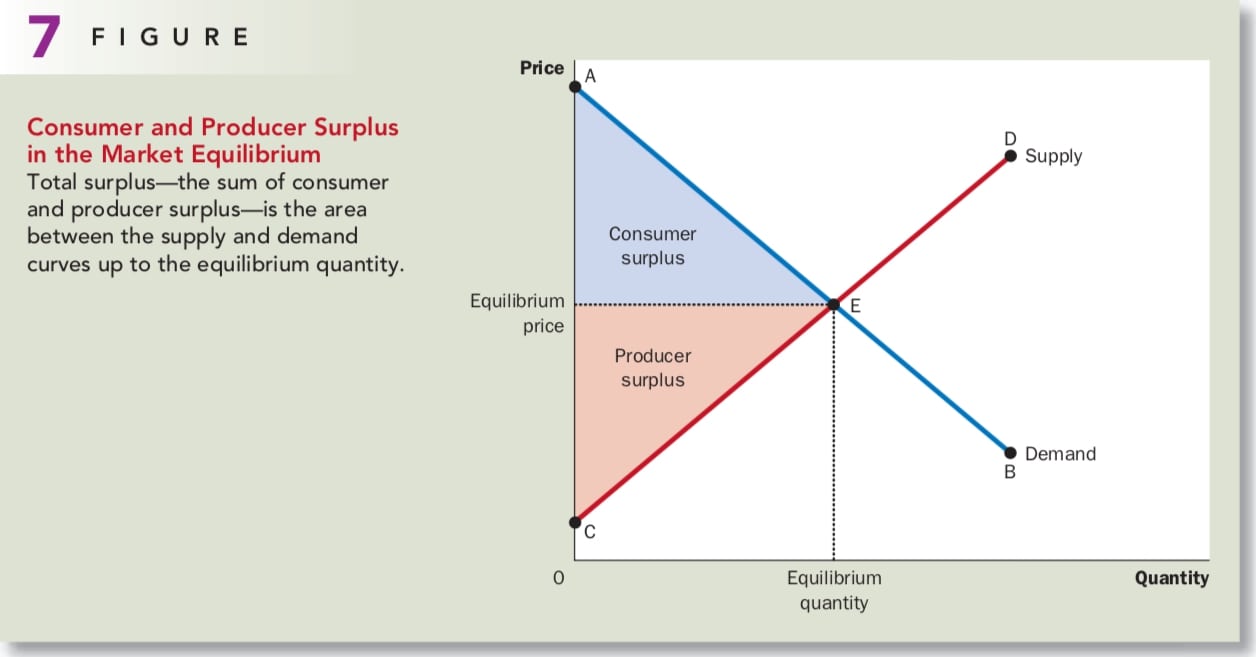 Figure 7 shows consumer and producer surplus when a market reaches the equilibrium of supply and demand curve. The total area between the supply and demand curves up to the point of equilibrium represents the total surplus in this market. Those buyers who value the good more than the price choose the buy the good; buyers who value it less than the price do not. Similarly, those sellers whose costs are less than the price choose to produce and sell the good. 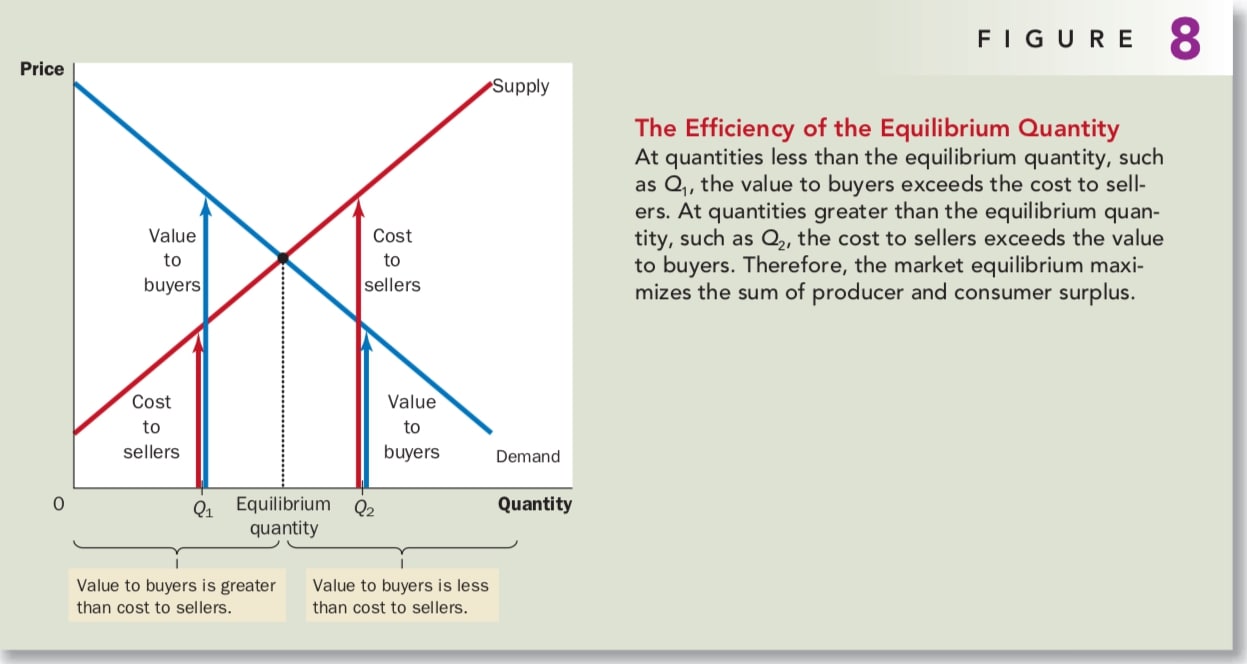 Therefore, the equilibrium outcome is an efficient allocation of resources.

This chapter introduced the basic tools of welfare economics — consumer and producer surplus — and used them to evaluate the efficiency of free markets. We showed that the forces of supply and demand allocate resources efficiently.

A word of warning is in order. To conclude that markets are efficient, we made several assumptions about how markets work. First, our analysis assumed that markets are perfectly competitive. In the world, however, competition is sometimes far from perfect. Second, out analysis assumed that the outcome in a market matters only to the buyers and sellers in that market. Yet, in the world, the decisions of buyers and sellers sometimes affect people who are not participants in the market at all. Pollution is the classic example. Such side effects, called externalities, cause welfare in a market to depend on more than just the value to the buyers and the cost to the sellers.