Microeconomics - Elasticity and Its Application

The Elasticity of Demand

To measure how much consumers respond to changes in economic variables, economists use the concept of elasticity. Elasticity is a measure of the responsiveness of quantity demanded or quantity supplied to one of its determinants.

The Price Elasticity of Demand and Its Determinants

Based on experience, however, we can state some general rules about what determines the price elasticity of demand.

Computing the Price Elasticity of Demand

For example, suppose that a 10 percent increase in the price of an ice-cream cone causes the amount of ie cream you buy to fall by 20 percent. We calculate your elasticity of demand as

The Midpoint Method: A Better Way To Calculate Percentage Changes and Elasticities

The Variety of Demand Curves 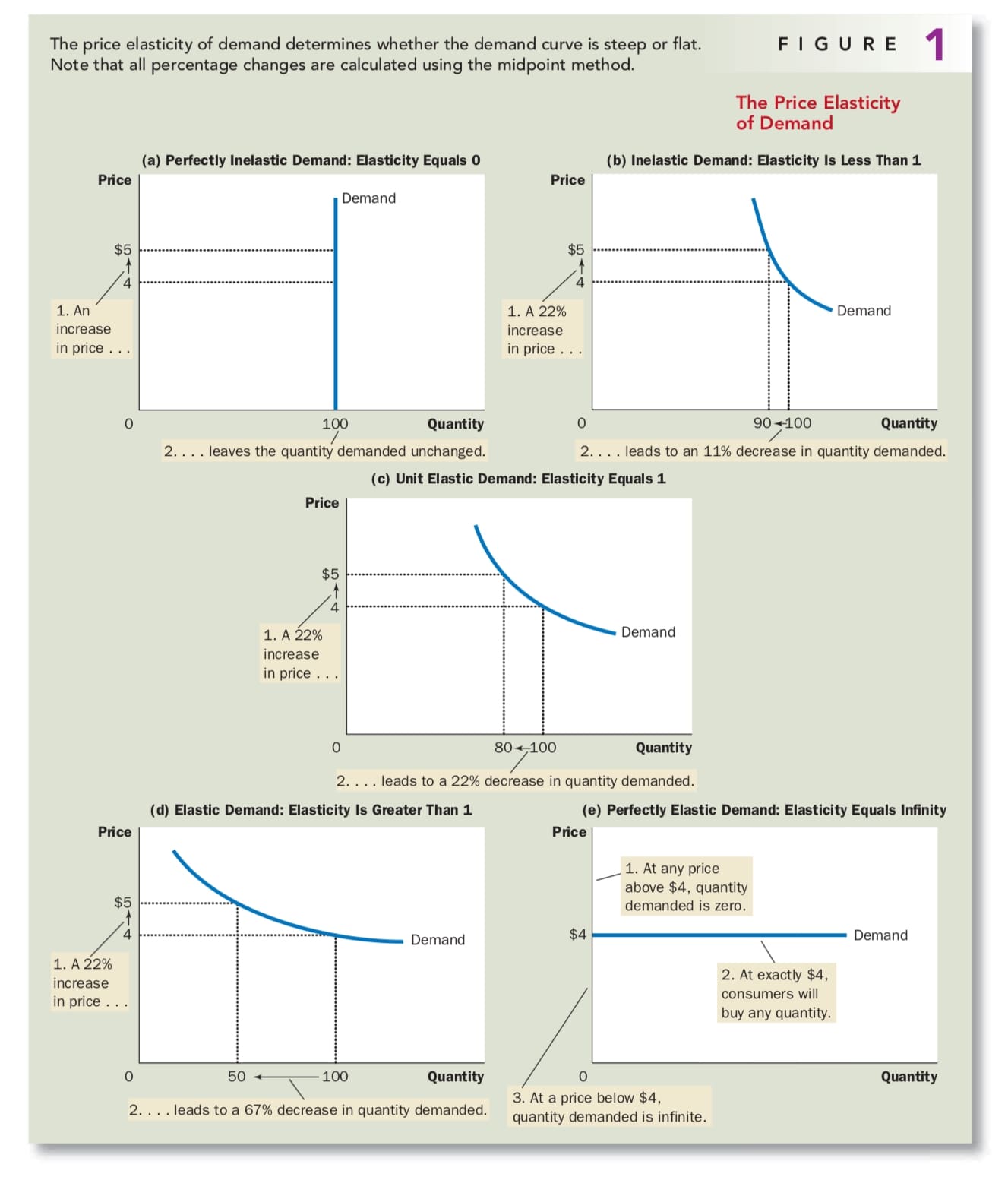 Total Revenue and The Price Elasticity of Demand

How does total revenue change as one moves along the demand curve? There are some examples in Figure 3. 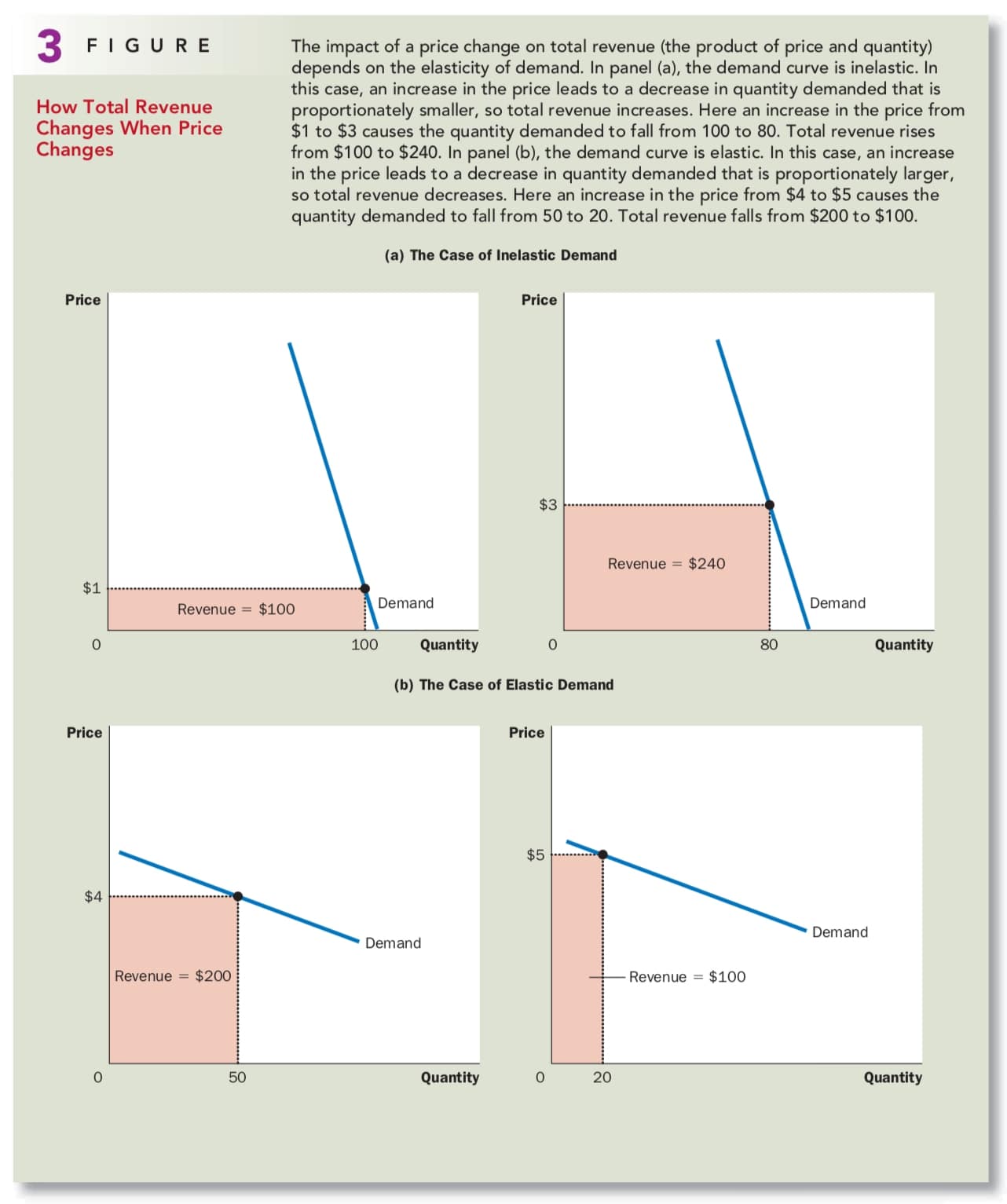 Although the examples in this figure are extreme, they illustrate some general rules:

Elasticity and Total Revenue Along A Linear Demand Curve 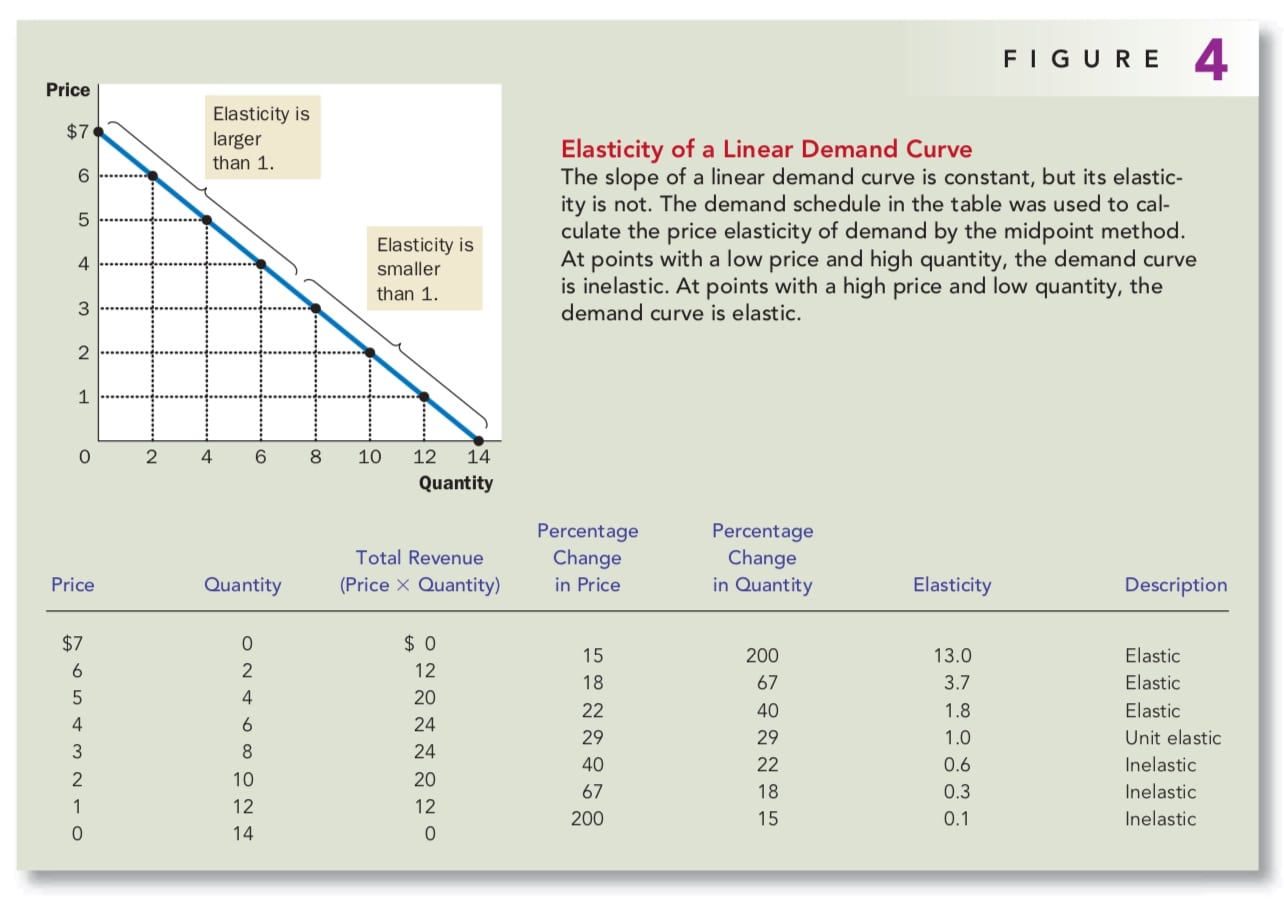 The linear demand curve illustrates that the price elasticity of demand need not be the same at all points on a demand curve. A constant elasticity is possible, but it is not always the case.

The Income Elasticity of Demand measures how the quantity demanded changes as consumer income changes.

The Cross-Price Elasticity of Demand measures how the quantity demanded of one good responds to a change in the price of another good.

The Elasticity Of Supply

The Price Elasticity of Supply And Its Determinants

In most markets, a key determinant of the price elasticity of supply is the time period being considered. Supply is usually more elastic in the long run than in the short run.

Computing The Price Elasticity of Supply

The Vary Of Supply Curves 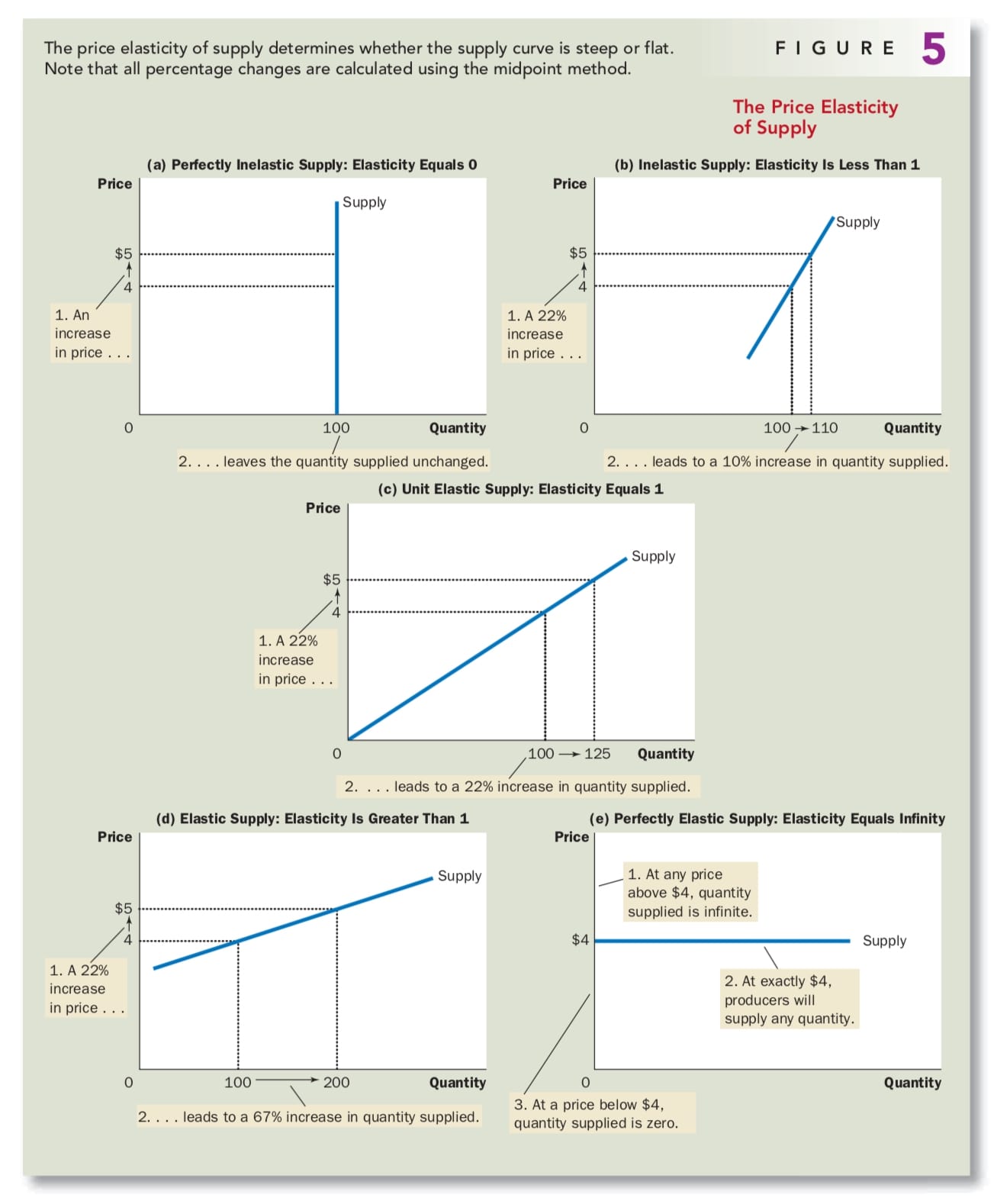 The raise of production provided by new farming technology could make farmers worse off. Because the new technic increase the amount of wheat that can be produced on each acre of land, farmers are willing to supply more wheat at any price. In other words, the supply curve shift to the right and the demand curve still remain the same, which cause the price of wheat falls.

Wheat being an inelastic good, the price of wheat falls doesn’t make people buy a lot more wheat. So a decrease in price causes farmers’ total revenue to fall.

You may wonder why farmers would adopt the new technology. The answer goes to the heart of how competitive markets work. Because each farmer is only a small part of the market for wheat, it’s better to use the new technic to produce and sell more wheat at any given price. Yet when all farmers do this, the supply of wheat increases, the price falls, and farmers are worse off.

It is important to keep in mind that what is good for farmers is not necessarily good for society as a whole. Improvement in farm technology can be bad for farmers because it makes farmers increasingly unnecessary, but it is surely good for consumers who pay less for food.

Why Did OPEC Fail To Keep The Price Of Oil High? 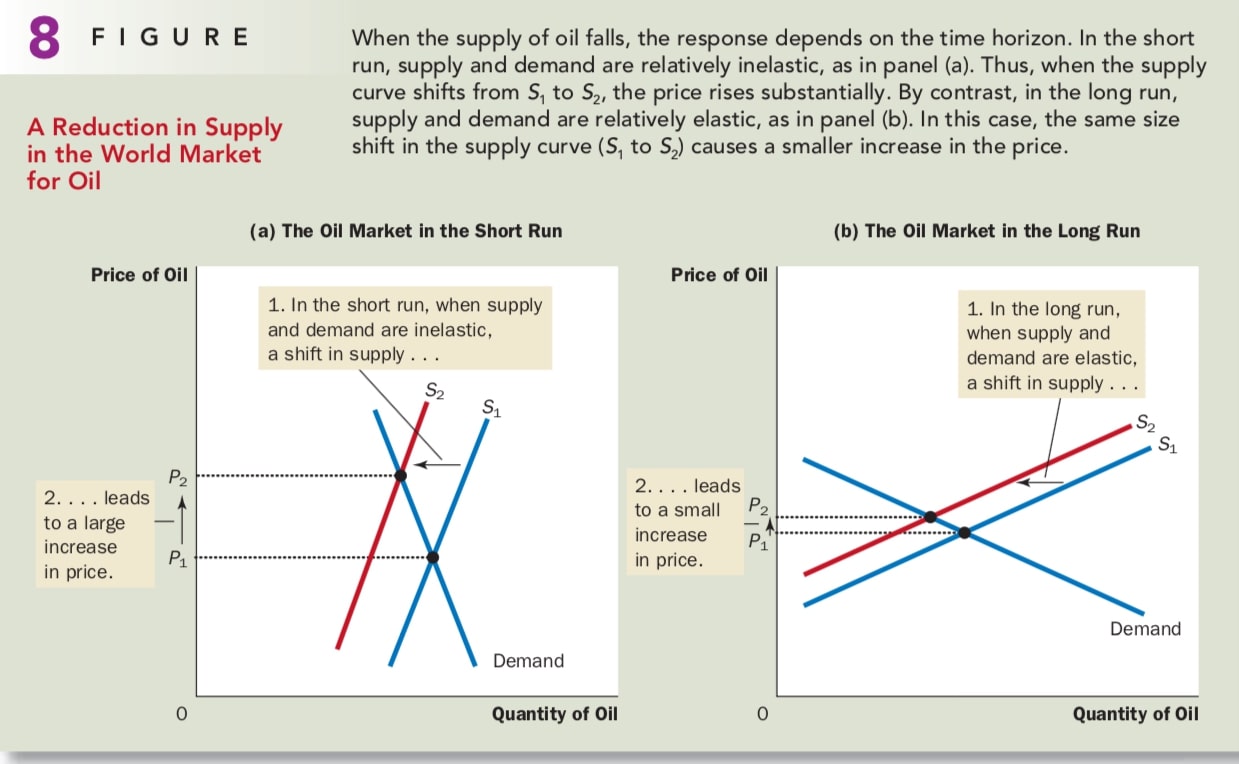 The situation is very different in the long run. Over long periods of time, producers of oil outside OPEC respond to high prices by increasing oil exploration. Consumers respond with greater conservation. Thus, as panel (b) of Figure 8 shows, the long-run supply and demand curves are more elastic. 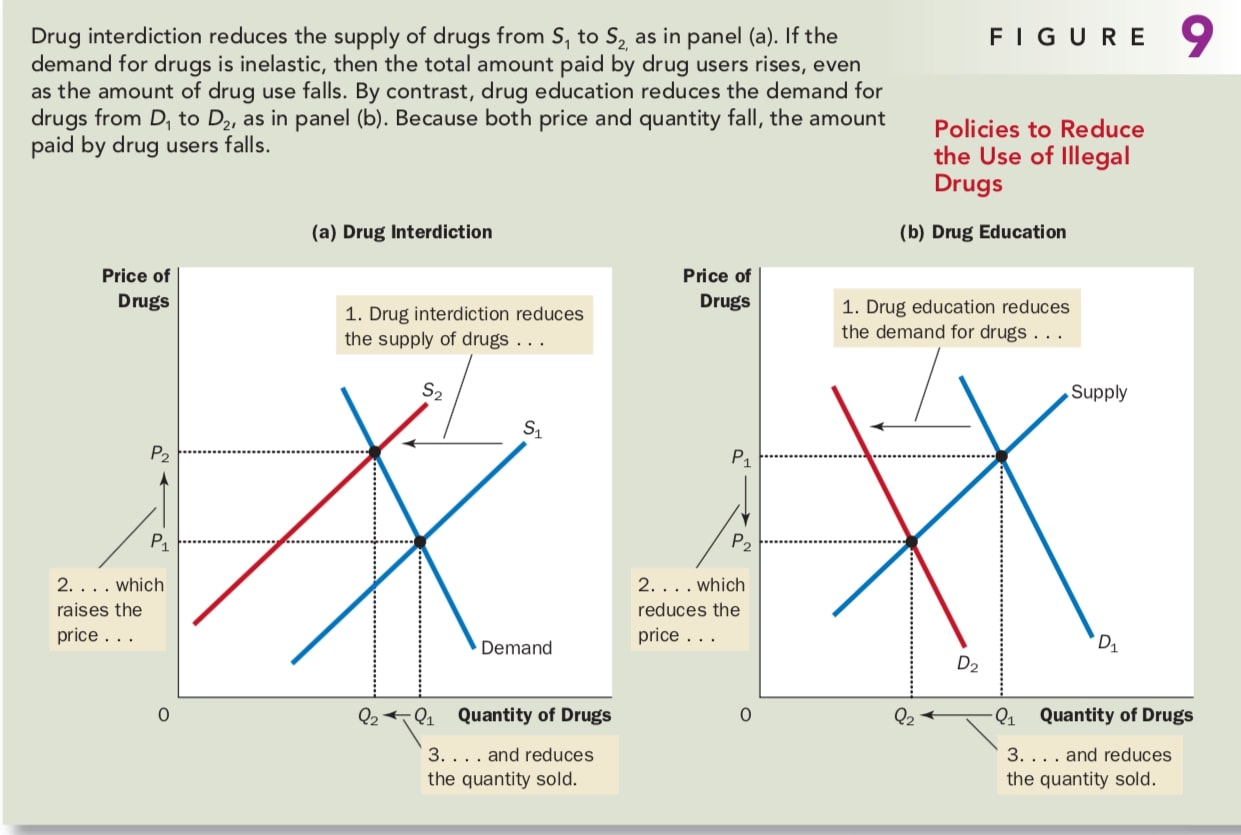 Suppose the government increase the number of federal agents devoted to the war on drugs. When the government stops some drugs from entering the country and arrests more smugglers, it raises the cost of selling drugs and, therefore, reduces the quantity of drugs supplied at any given price. But the demand for drugs is not changed, as panel (a) of Figure 9 shows.

But in terms of drug-related crime, since the demand for drugs is inelastic, then an increase in price raises total revenue in the drug market. Addicts who already had to steal to support their habits would have an even greater need for quick cash. Thus, drug interdiction could increase drug-related crime.

However, the demand for drugs is probably inelastic over short periods, it may be more elastic elastic over longer periods because higher prices would discourage experimentation with drugs among the young and, over time, lead to fewer drug addicts. In this case, drug interdiction would increase drug-related crime in the short run while decreasing it in the long run.

The Distributional Effects of Tax 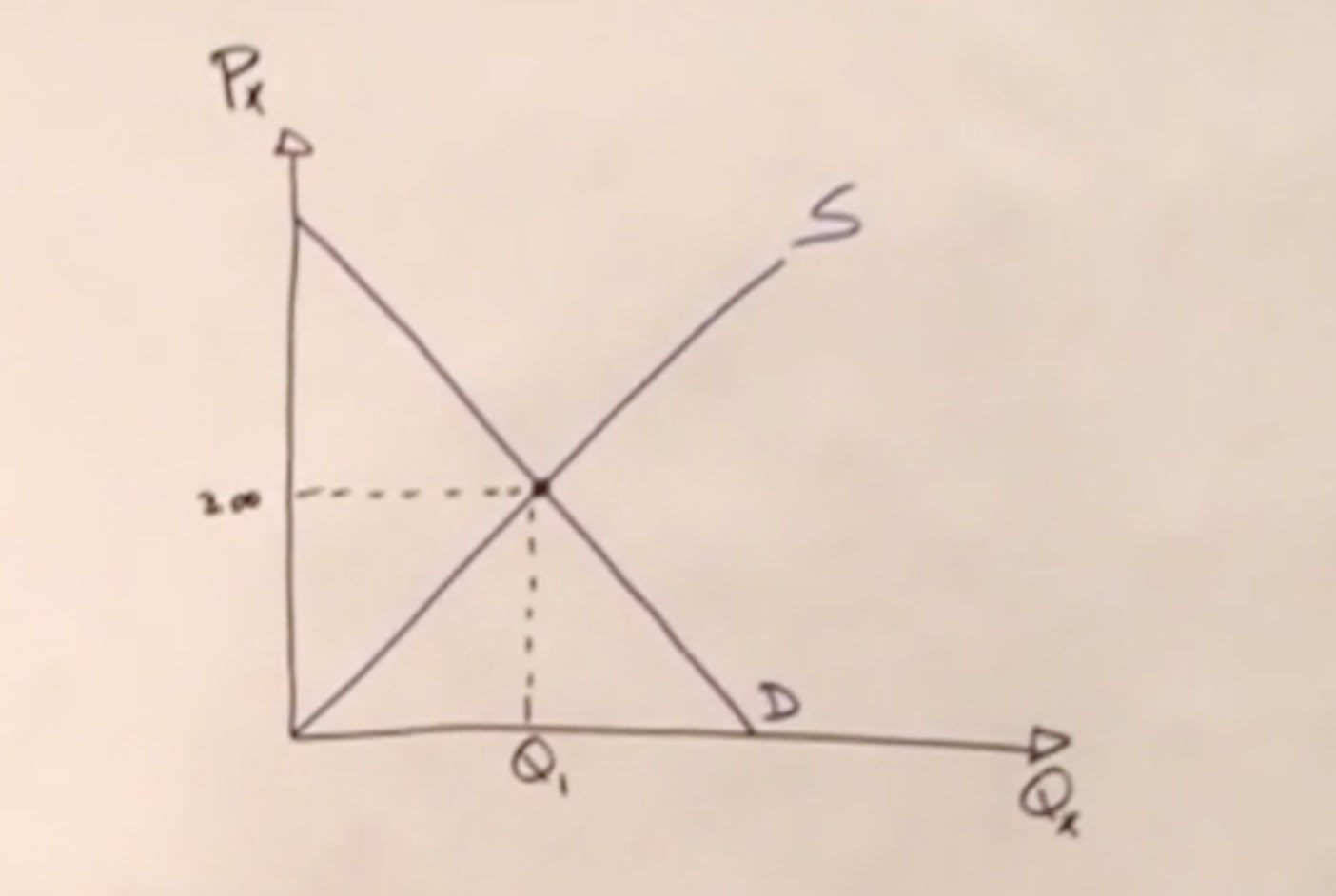 Suppose the government imposes a tax of ¥0.5 per gallon of gasoline and suppose the buyer will pay the tax. Then the demand curve will move left because there's a tax more. And that is changing the tax everywhere in the curve. So from any point, vertically in the curve, to the other point, we're going to have a distance of 50 cents. Let’s say the new demand curve generate a new equilibrium at price ¥2.75. So, what the buyers end up paying is at ¥2.75, the buyer that goes to the Sellers, plus the 50 cents that goes to the government. So in the end, they're actually paying ¥3.25 for a gallon of gasoline. 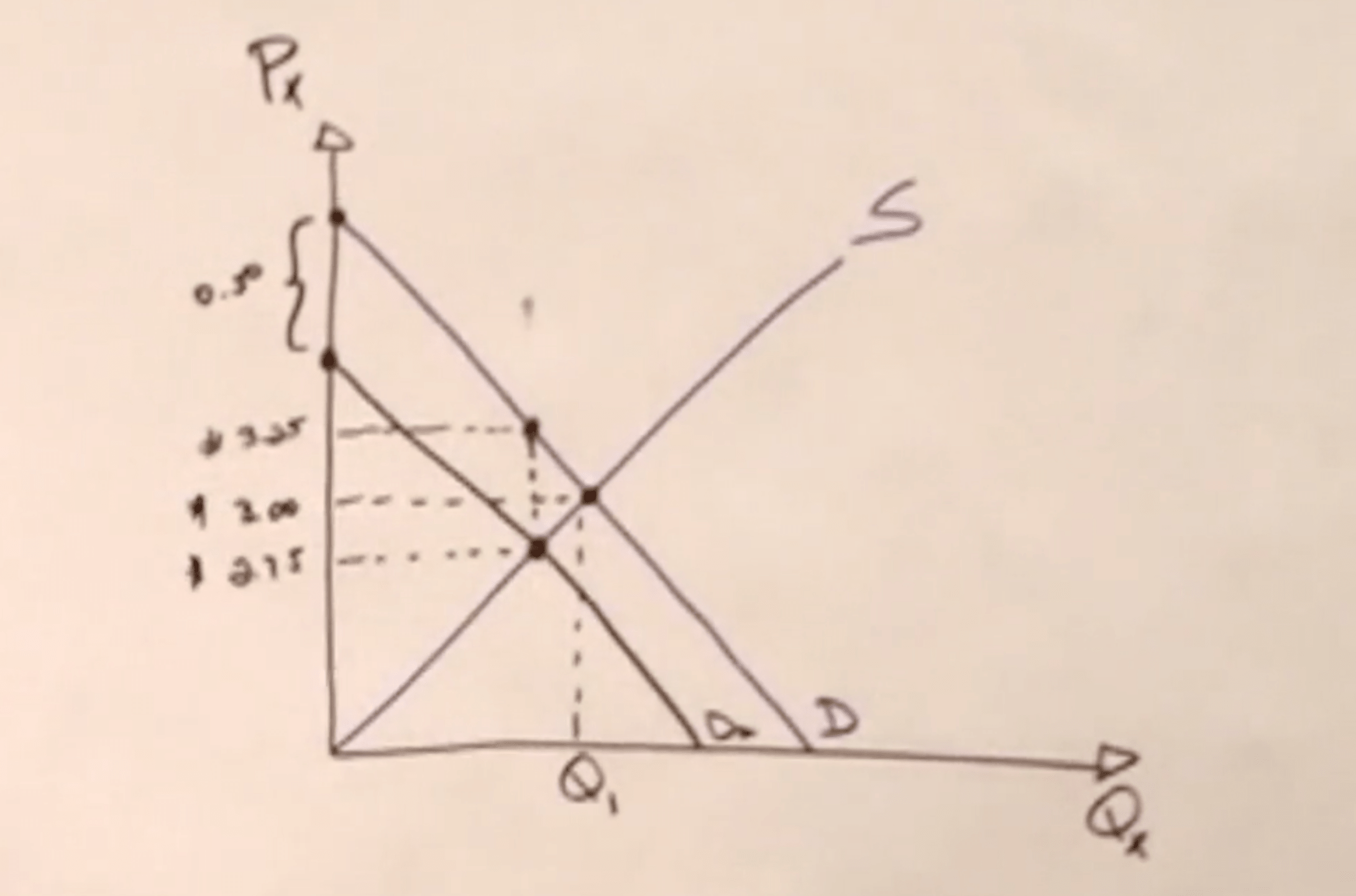 Now the buyers are paying ¥3.25. So they are worse off because they have a higher price by ¥0.25. And the sellers, while they were receiving ¥3 before, now they're only getting ¥2.75. So they are worse off by 25 cents too. Well, it looks like, in this particular situation, the buyers are sharing 25 cents, they're paying of the tax and sellers are putting up with 25 cents of the tax. So, this tax is equally distributed among the buyers and the sellers. And it doesn't matter if the sellers are the ones sending this tax to the government.

So what determined the distribution of the tax is which side of the market has the most trouble adjusting to a tax. And in this particular example, we're assuming that both have the same trouble and that is based on the elasticity. And the more inclined the curve is, the more inelastic that side of the market is. 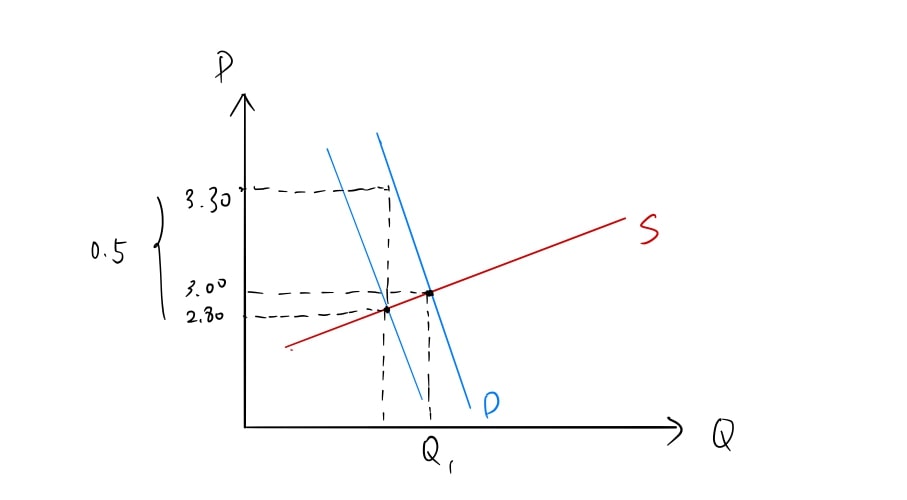 What happened? The market price went down to ¥2.80. The buyers pays ¥2.80 to the sellers, but then they pay 50 cents to the government. So they're actually paying effectively ¥3.30 with this tax. So they're paying 30 cents more than they were paying before per gallon of gasoline. How about the sellers? The sellers were selling it for ¥3 before. Now, they're getting ¥2.80 from the buyers, so they're worse off 20 cents. And it's a whole different story, because now, of the 50 cents, 30 cents are shared by the buyers and only 20 cents by the sellers. So the sellers are not sharing as much of the burden of this tax as the buyers are.

So the seller has a lot more freedom here to adjust to this tax by perhaps charging a higher price to the buyers. The buyers cannot adjust as easily and they will have to put up with most of the burden. So in the end, the most inelastic side of the market is the one that actually shares most of the burden of the tax regardless of who send the tax to the government.