Fingerprint matching (recognition) is the most popular biometric technique used in automatic personal identification. The main reason for the popularity of fingerprints as a form of identification is that the fingerprint of a person is unique and remains invariant with his or her age.

All silicon-based sensors consist of an array of pixels, each pixel being a tiny sensor itself. The user directly touches the surface of the silicon. The physical information is converted into electrical signals by using the capacitive sensor (other kinds of sensor can also be used, e.g., thermal, electric field and piezoelectric).

An ultrasound sensor is based on sending acoustic signals toward the fingertip and capturing the echo signal. The echo signal is used to compute the range image of the fingerprint and, subsequently, the ridge structure itself. 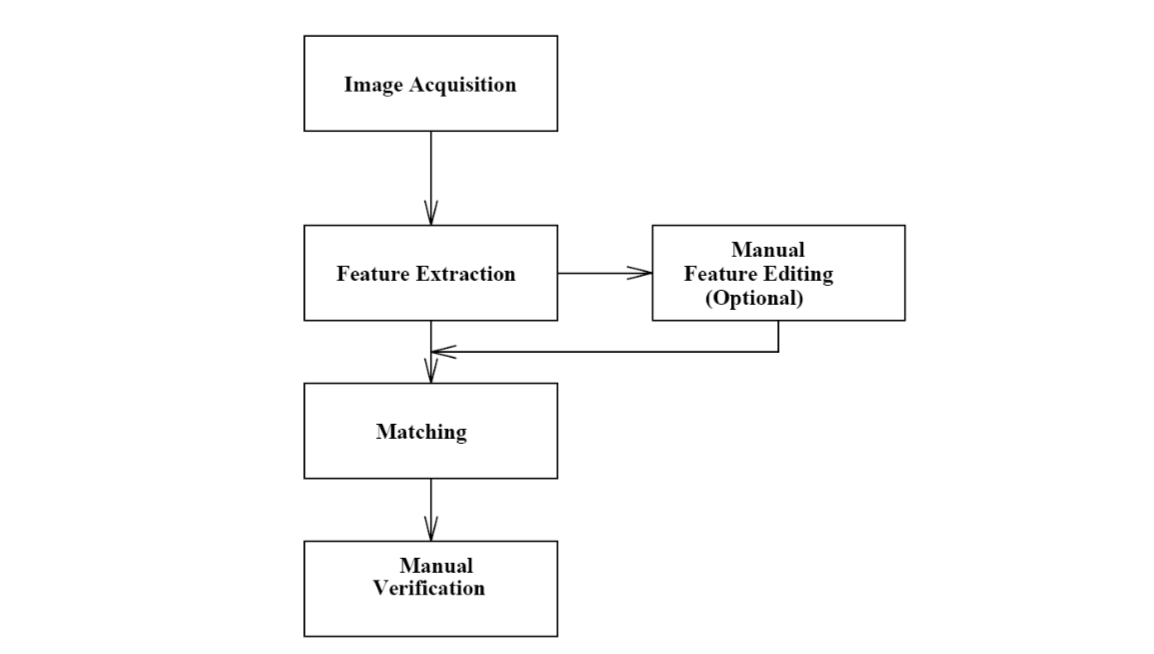 The ridges (or the valleys) exhibit anomalies of various kinds, such as ridge bifurcations, ridge endings, short ridges, and ridge crossovers. These features are called minutiae.

In a good quality rolled fingerprint image, there are about 70 to 80 minutia points and in a latent fingerprint the number of minutiae is much less (approximately 20 to 30 minutia points). Commercially available fingerprint identification systems typically use ridge bifurcations and ridge endings as features.

A critical step in fingerprint matching is to automatically and reliably extract minutiae from the input fingerprint images, which is a difficult task.

Fingerprint images can be of very poor quality. An enhancement algorithm which can improve the clarity of the ridge structure is therefore necessary.

The flowchart of the fingerprint enhancement algorithm is shown below.

A gray-level fingerprint image \(I\) is defined as an \(N \times N\) matrix. At the \(i\) th row and \(j\) th column, the intensity of the pixel is \(I(i, j)\). It is assumed that the fingerprint images are scanned at a resolution of 500 dots per inch (dpi), which is the resolution recommended by FBI.

An input fingerprint image is normalized so that it has a pre-specified mean \(M_0\) and variance \(\text{VAR}_0\).

The main steps are as follows.

The gray levels along ridges and valleys can be modeled as a sinusoidal-shaped wave along a direction normal to the local ridge orientation. 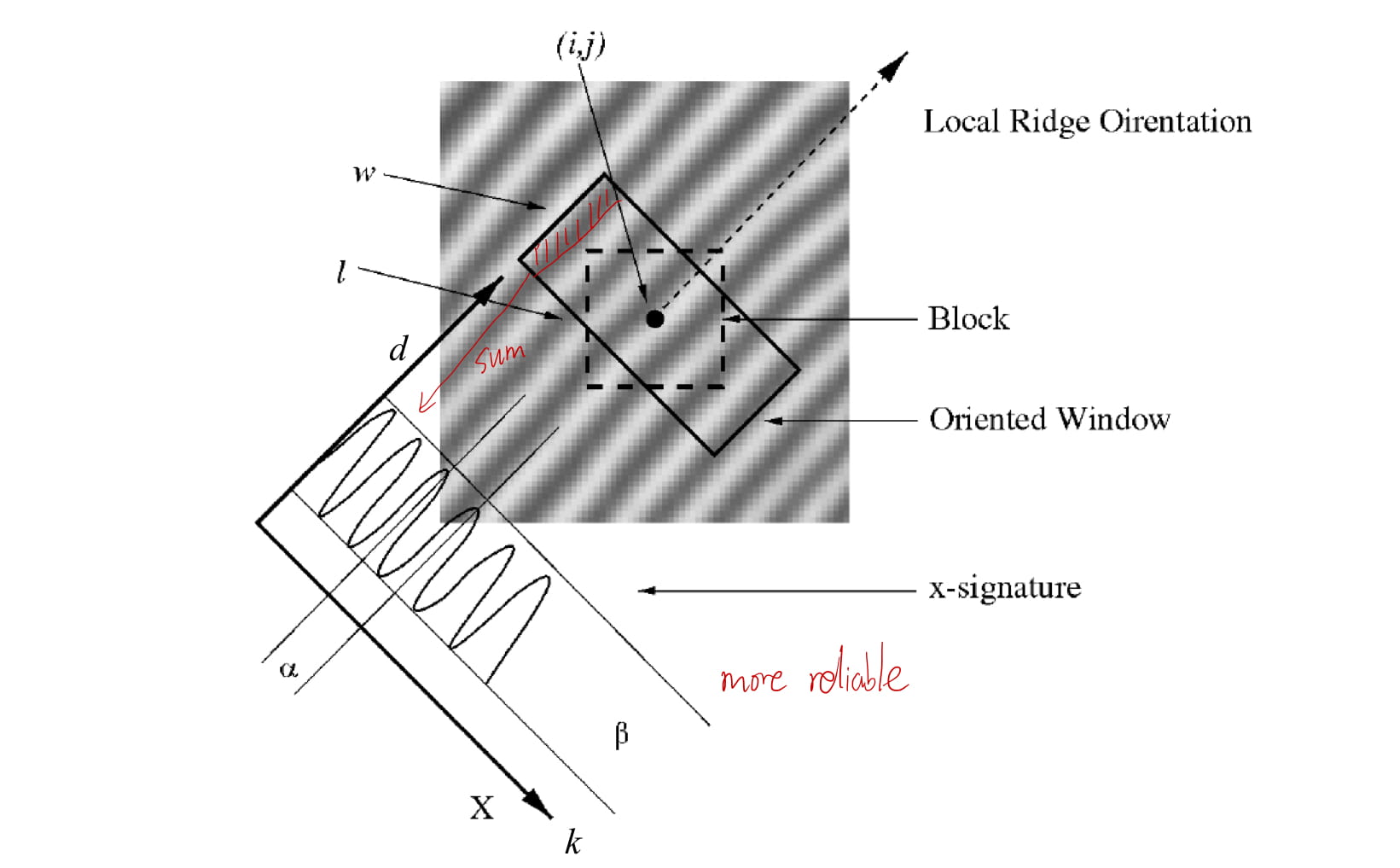 Let \(G\) be the normalized image and \(O\) be the orientation image (field). For estimating the ridge frequency \(Ω\) image,

Three features are used to characterize the sinusoidal-shaped wave: amplitude, frequency, and variance.

Typical fingerprint images where both recoverable and unrecoverable regions were manually labeled can be selected for region mask estimation. The above three features can be computed for each image.

Using the k-NN and clustering algorithms, each \(w \times w\) block in an input fingerprint image can be classified into a recoverable or an unrecoverable block.

The configurations of parallel ridges and valleys with well-defined frequency and orientation in a fingerprint image provide useful information which helps in removing undesired noise.

A special (bandpass) filter, namely Gabor filter, that is tuned to the corresponding frequency and orientation can efficiently remove the undesired noise and preserve the true ridge and valley structures.

Gabor filters have both frequency-selective and orientation-selective properties and are used for removing noise and preserving true ridge or valley structures.

The even-symmetric Gabor filter has the following general form:

Once the ridges are located, directional smoothing is applied to smooth the ridges. A 3×7 mask is placed along the orientation field for each window. The mask containing all '1's enables us to count the number of '1's in the mask area.If the count of '1's is more than 25% of the total number of pixels, the ridge point is retained.

Locating minutia points in the thinned image is relatively easy.

A count of the number of 'on' neighbors at a point of interest in a \(3\times 3\) window is sufficient for this purpose.

Some post-processing can be performed to further improve detection quality.

There are three steps.

The usual Hough transform for line detection can be generalized for point matching. 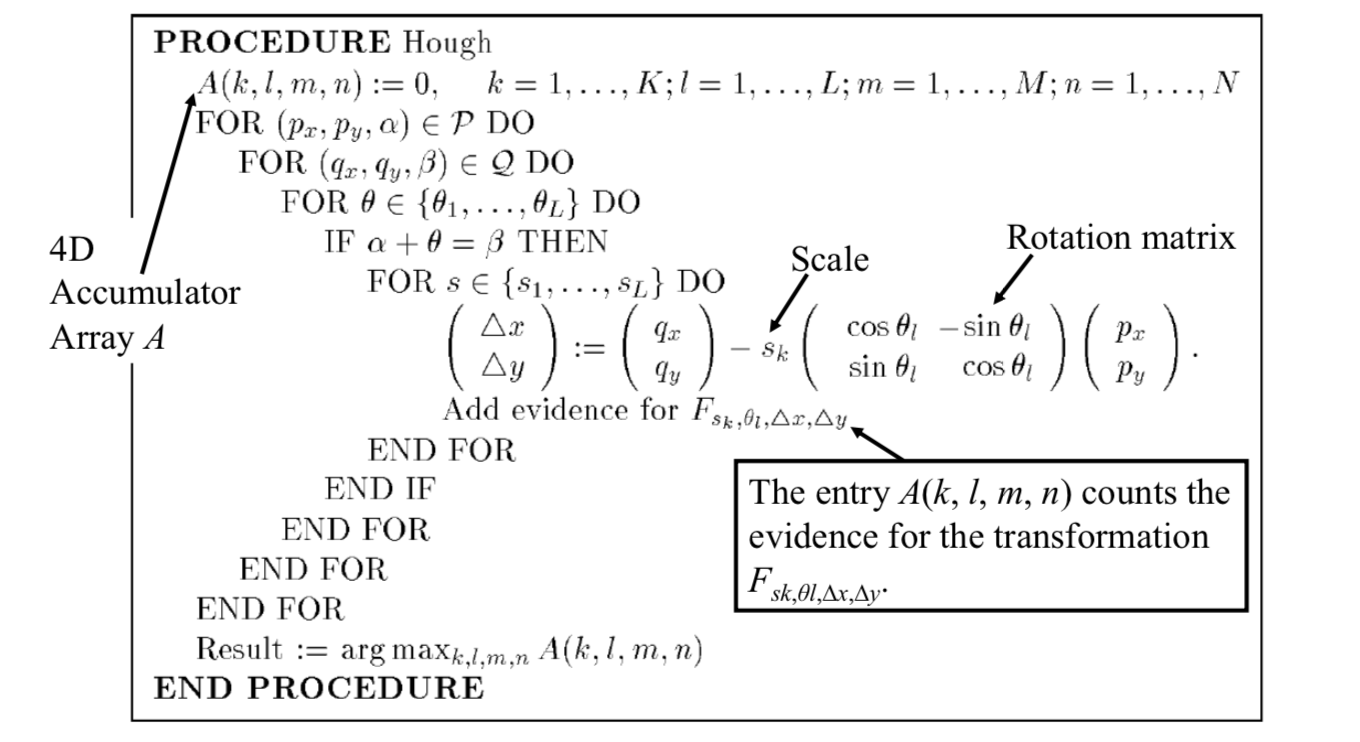 The transform has maximum value of \(A\) means that it can match as much points as possible. 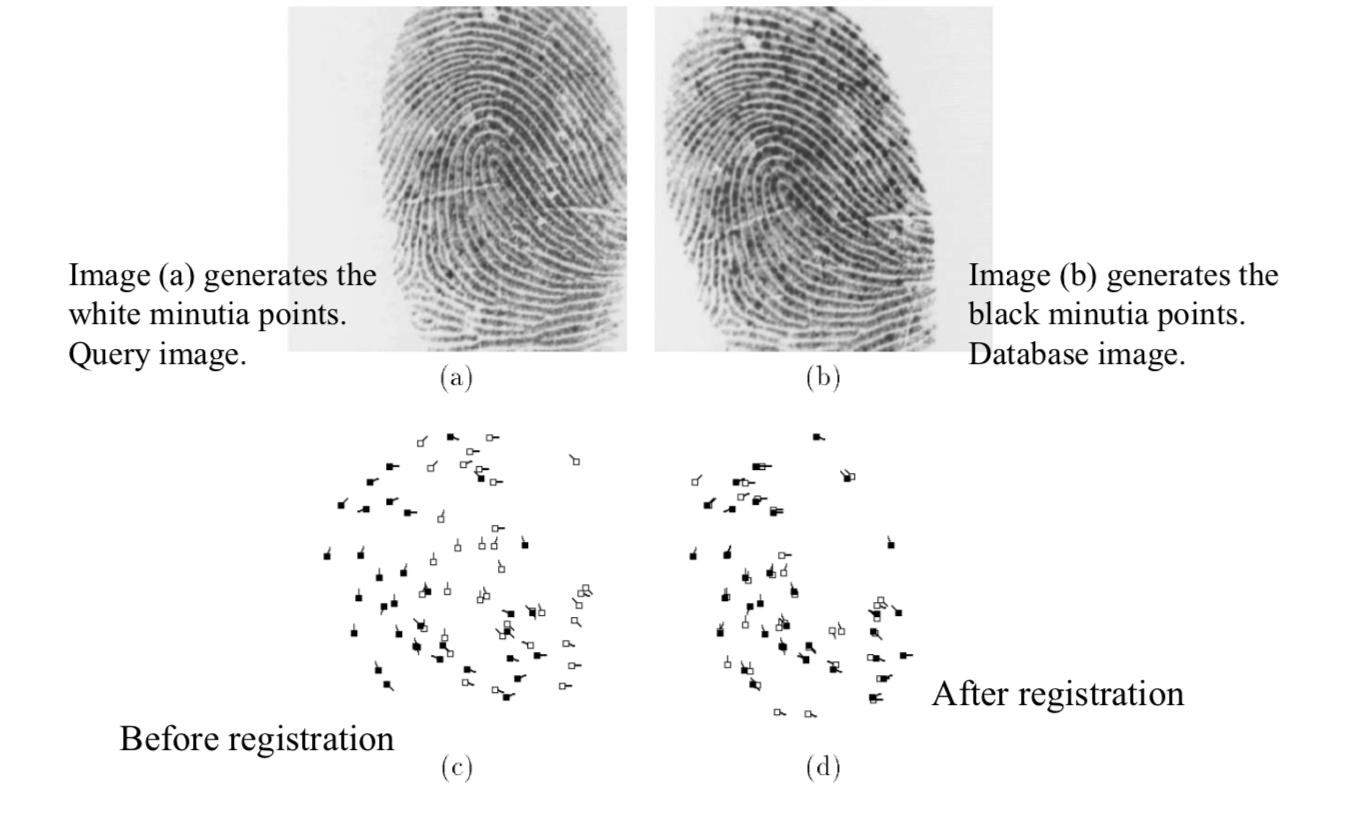 The matching algorithm is based on finding the number of paired minutiae between each database fingerprint and the query fingerprint.

In order to reduce the amount of computation, the matching algorithm takes into account only those minutiae that fall within a common bounding box. The common bounding box is the intersection of the bounding box for query and reference (database) fingerprints. Once the count of matching minutiae is obtained, a matching score is computed. The matching score is used for deciding the degree of match. Finally, a set of top ten scoring reference fingerprints is obtained as a result of matching.

FingerCode is a new representation for the fingerprints which yields a relatively short, fixed length code suitable for matching as well as storage on a smartcard.

The matching reduces to finding the Euclidean distance between these FingerCodes and hence the matching is very fast and the representation is amenable to indexing.

The FingerCode partitions the region of interest of the given fingerprint image with respect to a reference point. A feature vector is composed of an ordered enumeration of features extracted from the information contained in each sector specified by the tessellation. 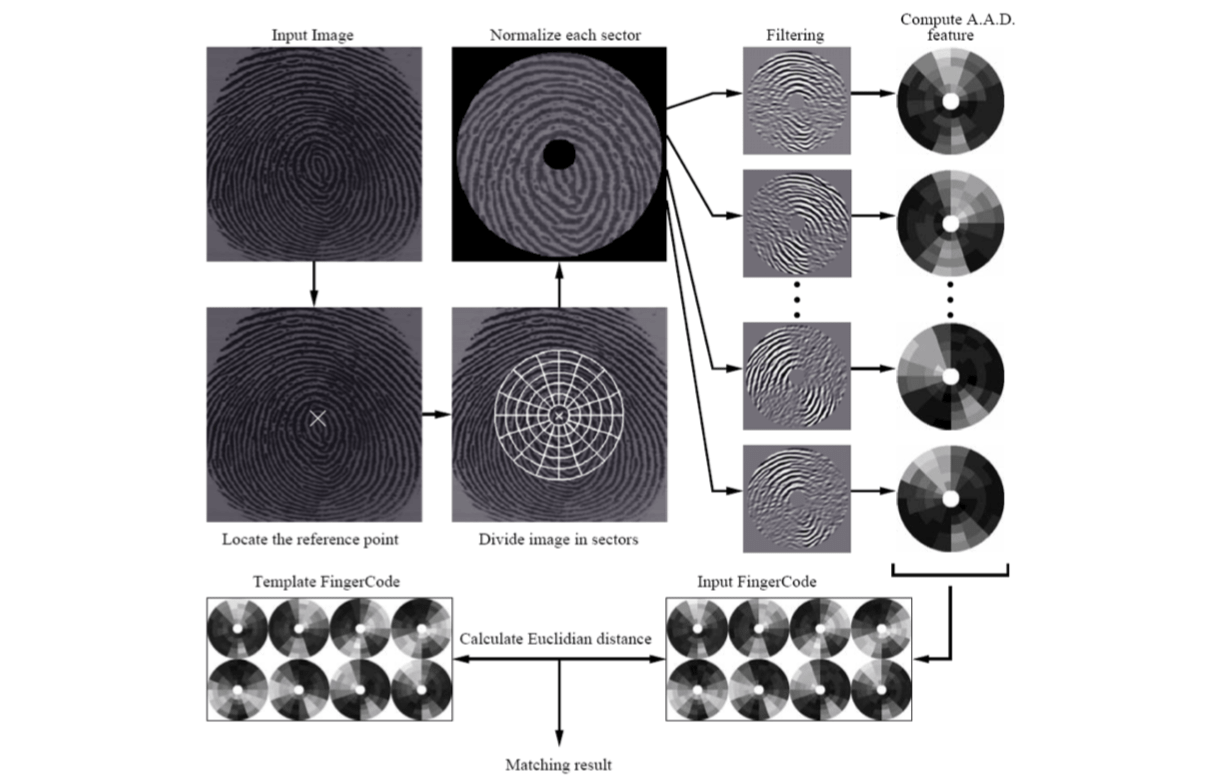 The feature elements capture the local information by using the Gabor filterbank. The ordered enumeration of the tessellation captures the invariant global relationships among the local patterns.

These features capture both the global pattern of ridges and valleys and the local characteristics. Matching is based on the Euclidean distance between the FingerCodes.

There are four steps for extracting the FingerCode. 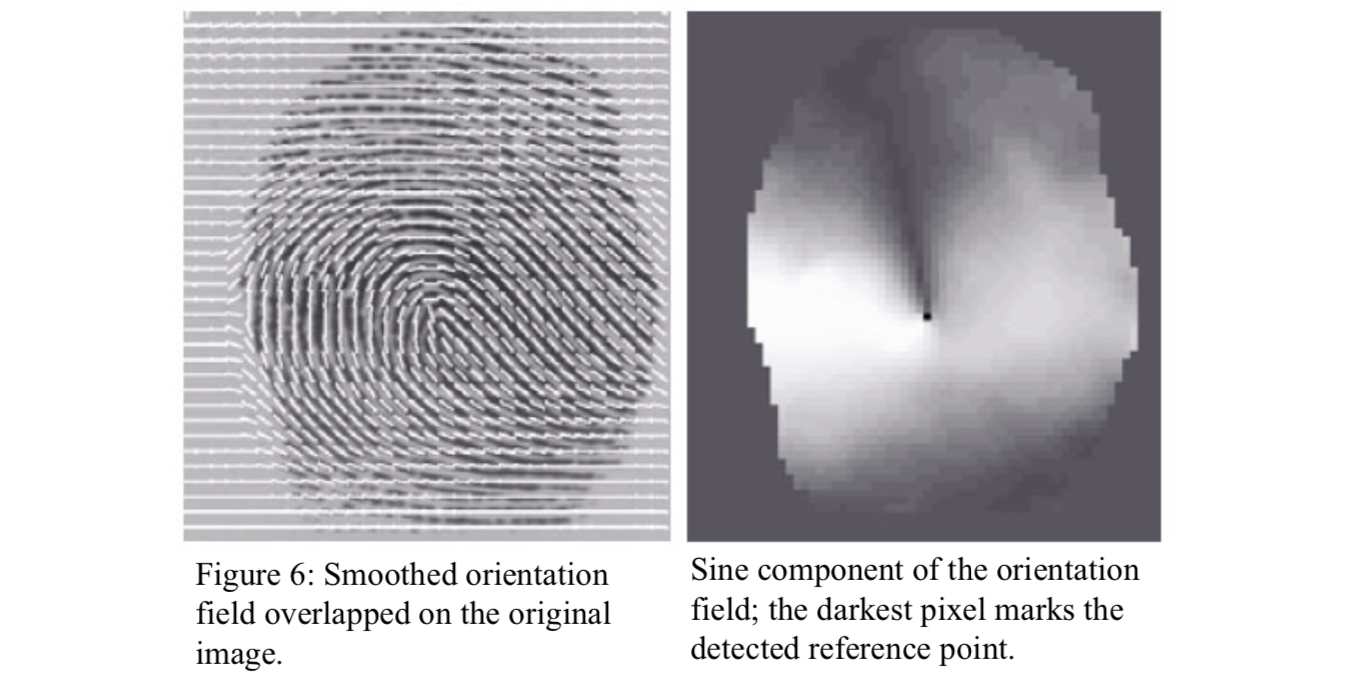 Given an input fingerprint image, there are seven steps for finding the reference point.

The geometry of regions \(R_I\) and \(R_{II}\) is designed to capture the maximum curvature in concave ridges.

Partitioning the region around the reference point

Given the detected reference point, the input fingerprint image is partitioned into 80 sectors. 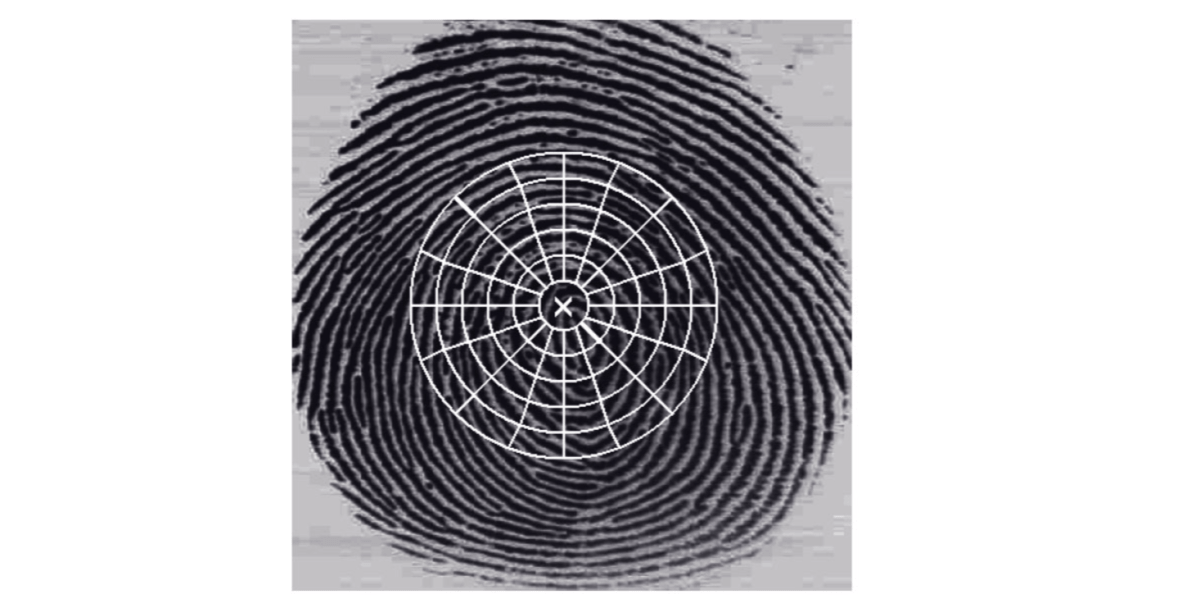 Filtering the region of interest

A minutia point can be viewed as an anomaly in locally parallel ridges and it is the information that is captured by using the Gabor filters.

Before filtering the fingerprint image, image normalization is performed separately for each sector with \(M_0\) and \(VAR_0\).

A fingerprint convolved with a \(0^o\)-oriented filter accentuates those ridges which are parallel to the x-axis and smoothes the ridges in the other directions. These eight directional-sensitive filters capture most of the global ridge directionality information as well as the local ridge characteristics present in a fingerprint. 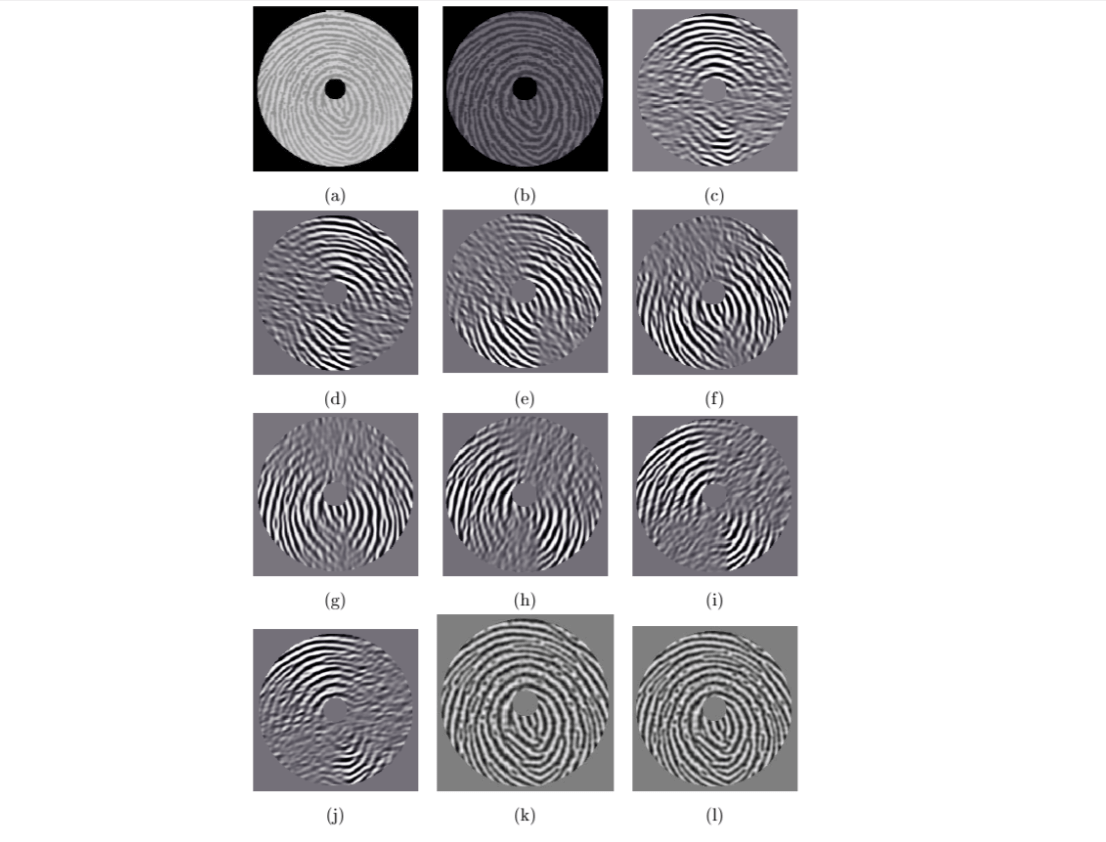 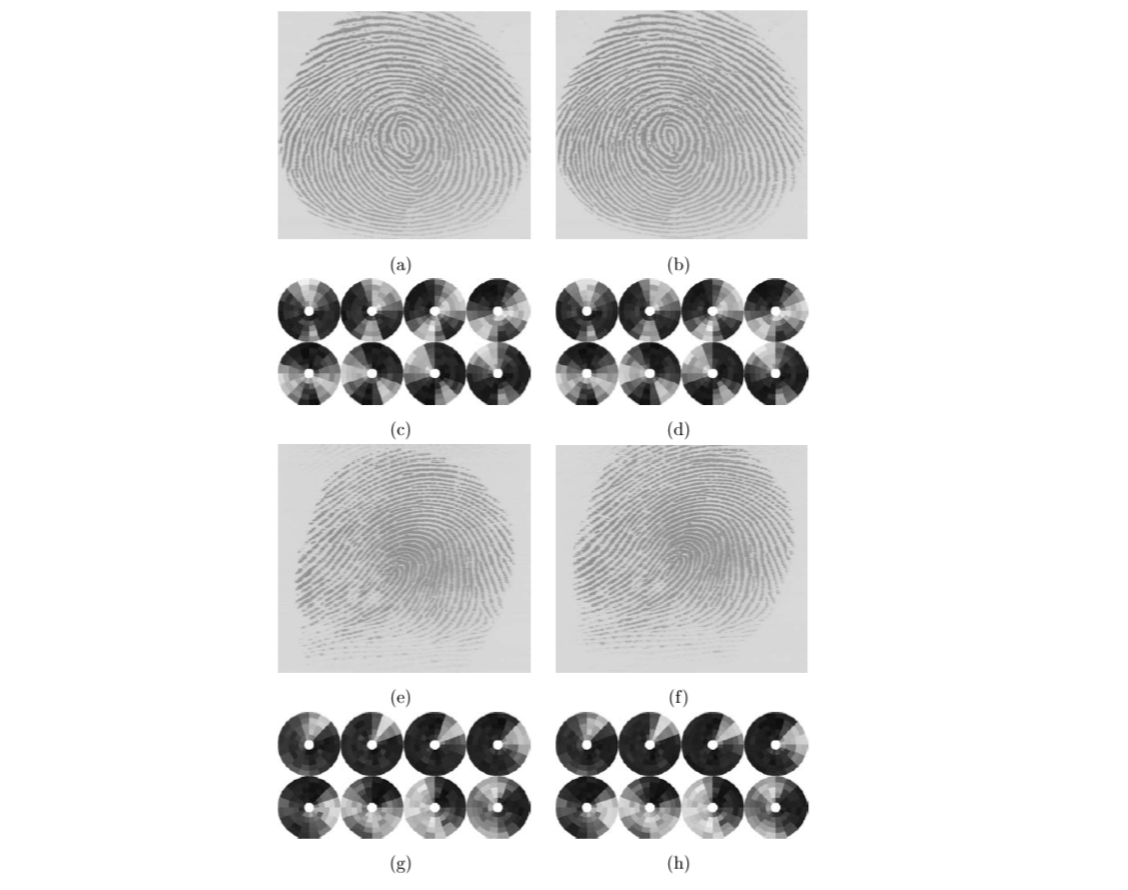 The average absolute deviation of each sector in each of the eight filtered images defines the components of the feature vector. Fingerprint matching is based on finding the Euclidean distance between the corresponding FingerCodes.