There are three different types of intensity discontinuities in a digital image:

If \(|R|≥T\) , then a point has been detected. This point is the location on which the mask is centred, where \(T\) is a non-negative threshold.

The mask below is the Laplacian mask for detecting point. Sum of all weights is zero to make sure that there is no response at a flat region (constant intensity region). 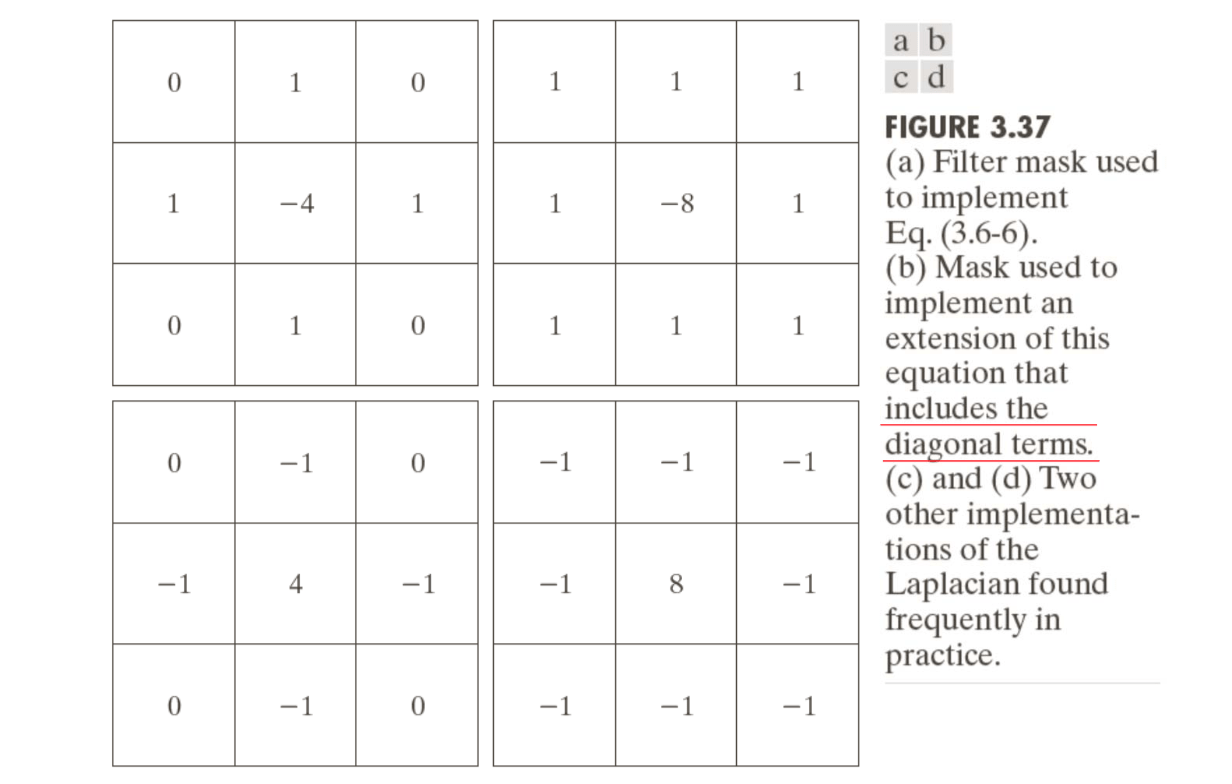 A line is detected when more than one aligned, connected points are detected or, the response of line mask is greater than some threshold. The below are line masks for detecting lines (1 pixel thick) in 4 different specific directions:

If we want to detect a line in a specified direction, then we should use the mask associated with that direction and threshold its output responses.

Edge is the boundary of regions. The boundary has meaningful discontinuities in grey intensity level. There are three types of edges: ideal edge (left), ramp edge (middle) and roof edge (right).

For an ideal edge (step edge, left), an edge is a collection of connected pixels on the region boundary. Ideal edges can occur over the distance of 1 pixel.

Roof edges (right) are models of lines through a region, with the base (width) of a roof edge being determined by the thickness and sharpness of the line. In the limit, when its base is 1 pixel wide, a roof edge becomes a 1 pixel thick line running through a region in an image. Roof edges can represent thin features, e.g., roads, line drawings, etc.

For a ramp edge (middle): 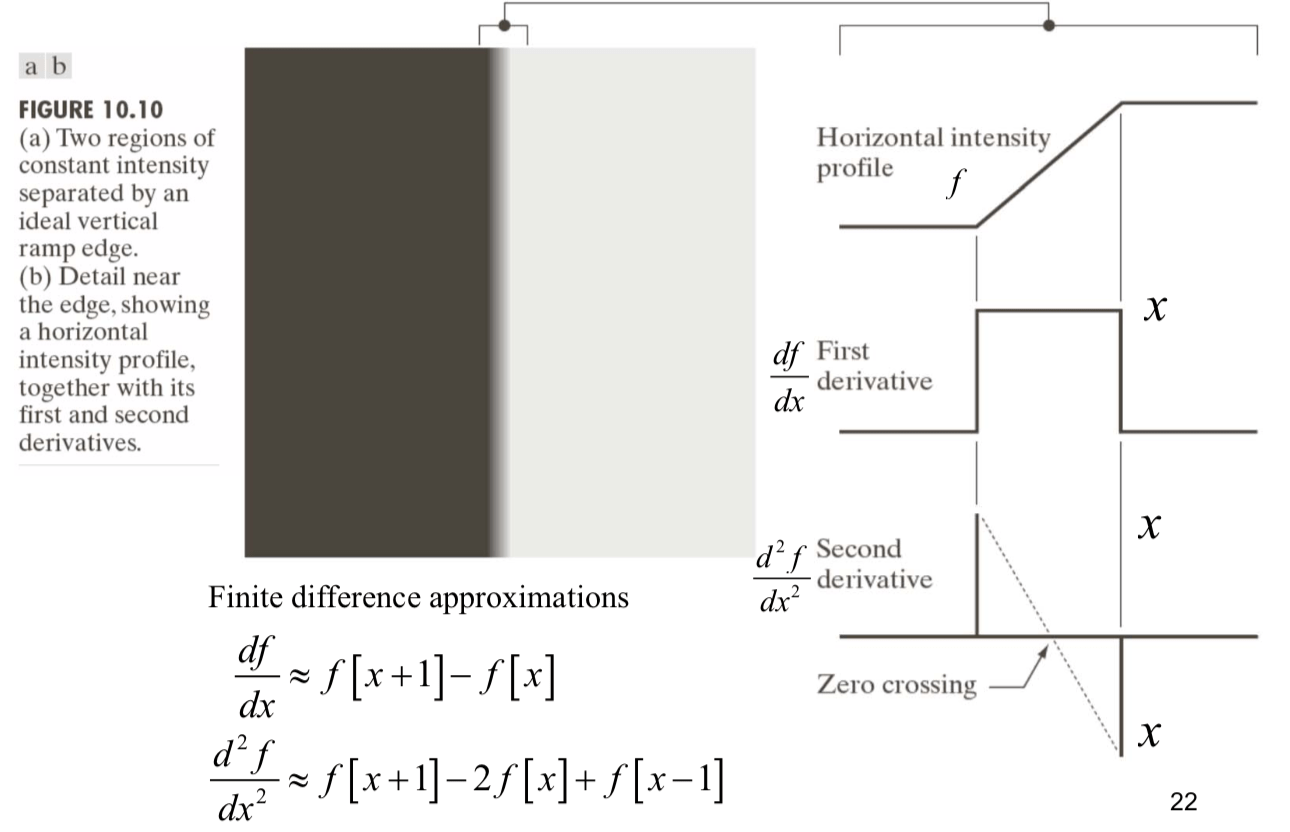 However, fairly little noise can have a significant impact on the first and second derivatives used for edge detection in images. Image smoothing is commonly used prior to the edge detection so that the estimations of the two derivatives can be more accurate.

The are several ways to approximate the partial derivatives: 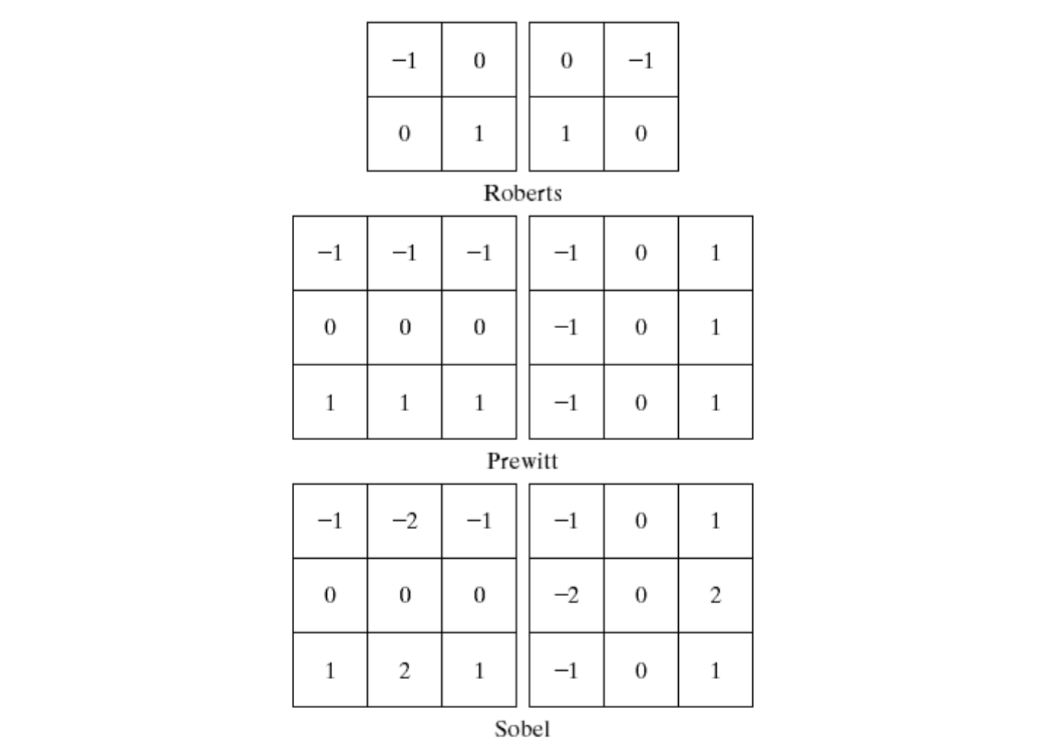 Below are diagonal edge masks for detecting discontinuities in the diagonal directions. 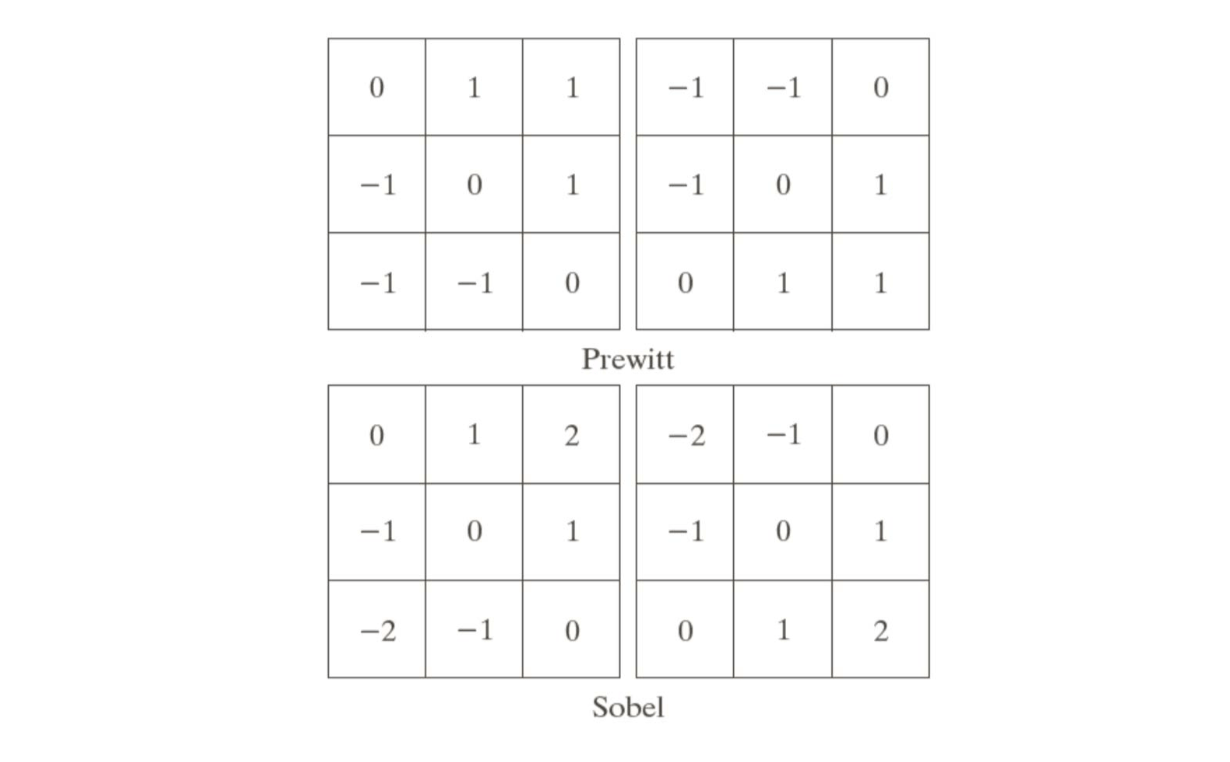 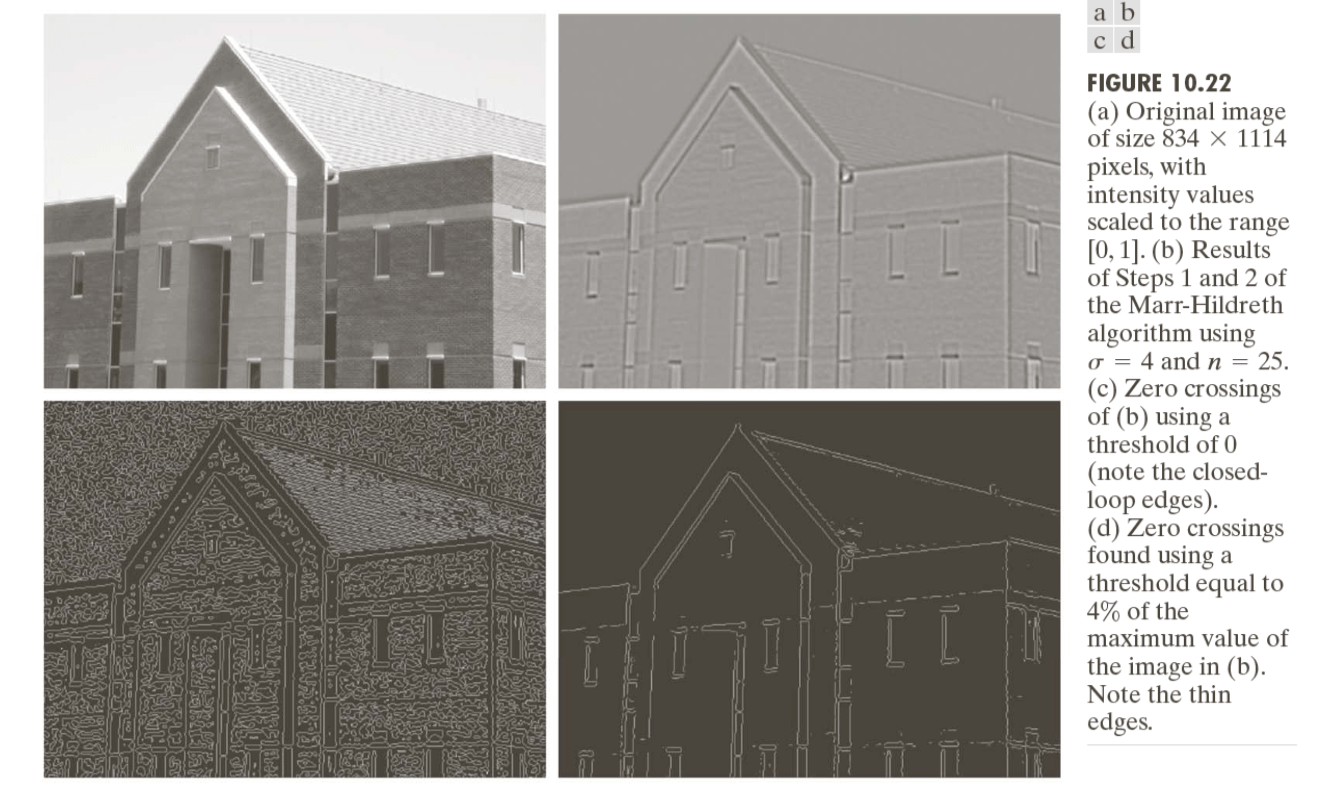 SIFT is useful for finding distinctive patches (keypoints) in images and transforming keypoints (locations) into features vectors for recognition tasks.

The method is a cascade (one step followed by the other step) filtering approach, in which more computationally expensive operations are applied only at locations that pass an initial test.

The difference between two nearby scales separated by a constant multiplicative factor \(k\) is \[ \begin{align} D(x,y,\sigma)&=L(x,y,k\sigma)-L(x,y,\sigma)\\ &=\left(G(x,y,k\sigma)-G(x,y,\sigma)\right)\ast I(x,y) \end{align} \] The DoG function provides a close and efficient approximation to the scale-normalized Laplacian of Gaussian (LoG). 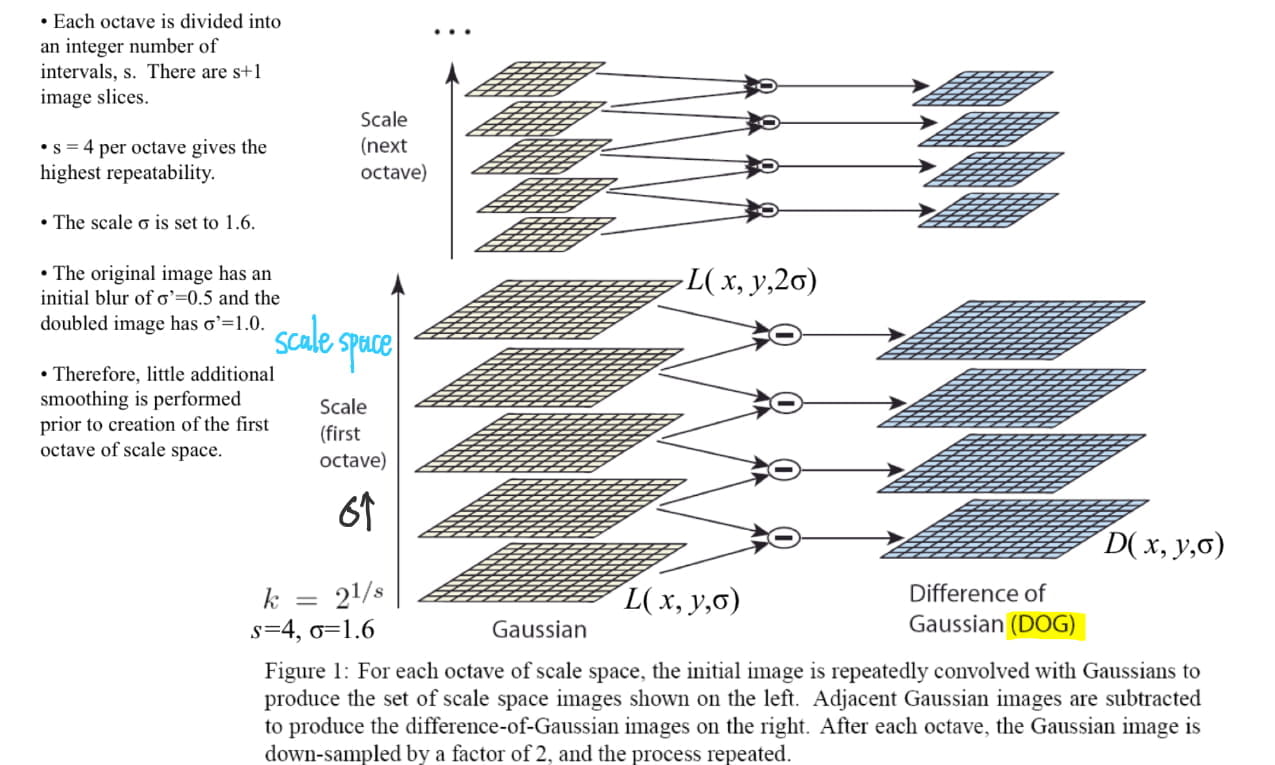 Local extrema (maxima and minima) of \(D( x, y, σ)\) are detected by comparing the values of its 26 neighbors, including 9 from the above image, 9 from bottom image and 8 from the current image.It is selected only if the center pixel is larger than all of these neighbors (26 neighbors) or smaller than all of them. 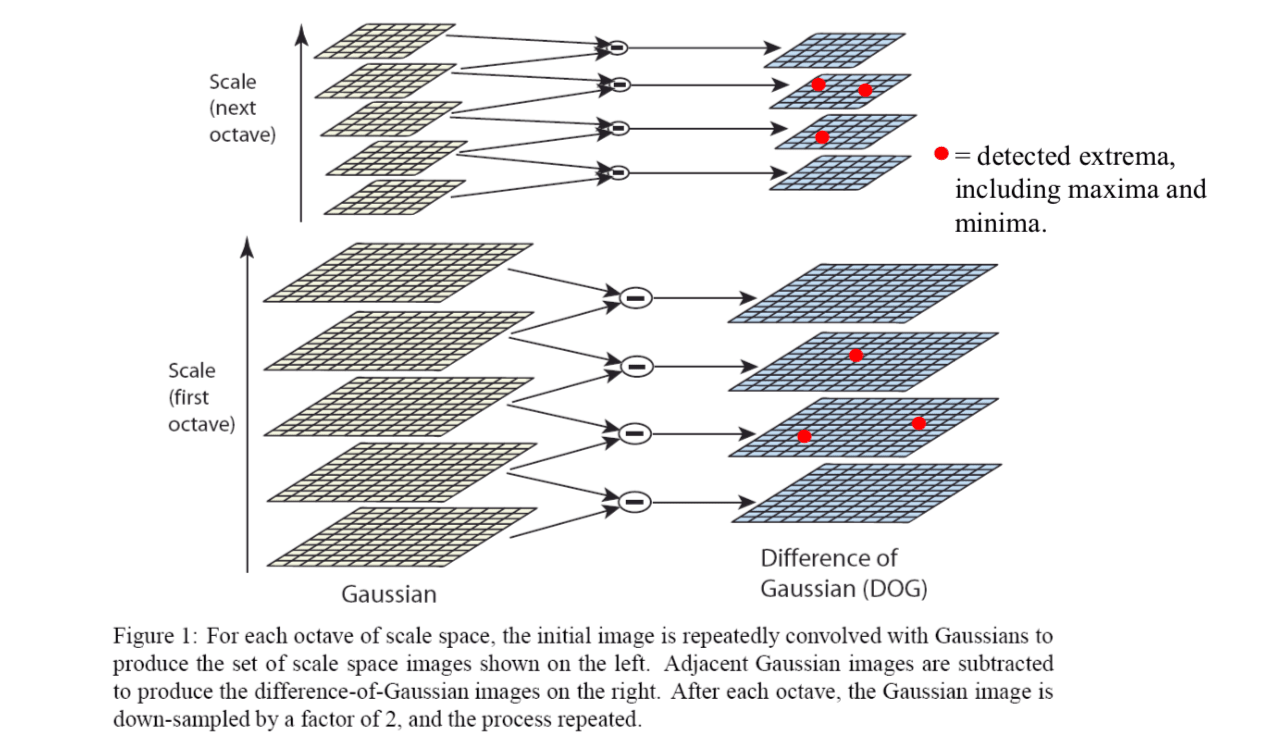 Once a keypoint candidate has been found by comparing a pixel to its neighbors, the next step is to determine whether the keypoint is selected based on local contrast and localization along edge. Therefore, the keypoints will be rejected if these points have low contrast.

All extrema are discarded if \(|D(x)|<0.03\) (minimum contrast), where \(x\) represents a relative image position with maximum value of \(D\). The keypoints will be rejected if these points are poorly localized along an edge (determined based on the ratio of principle curvatures). 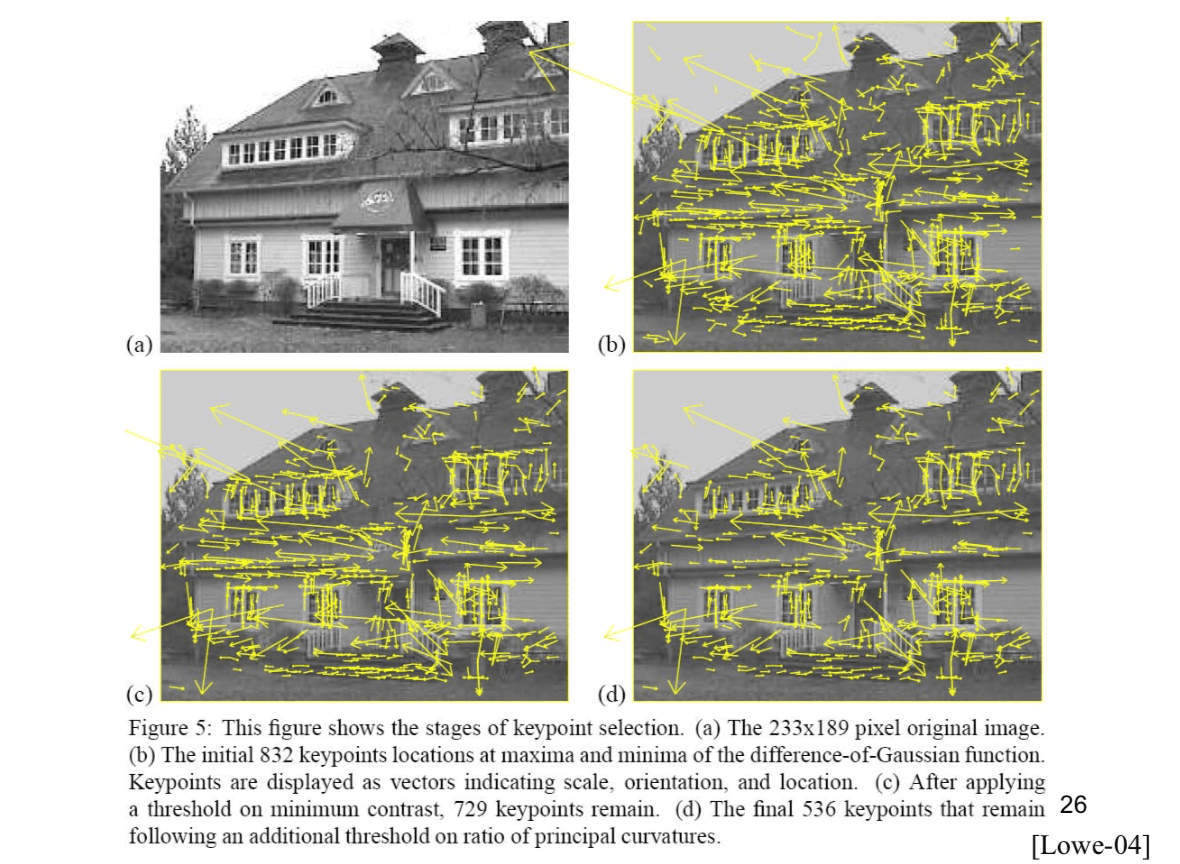 Each corresponding keypoint in \(L\) is assigned a dominant orientation. The keypoint descriptor can be represented relative to this orientation and therefore achieve invariance to image rotation.

For each detected keypoint, a local image descriptor is computed. It is partially invariant to change in illumination and 3D viewpoint.

In order to achieve orientation invariance, the coordinates and the gradient orientations are rotated relative to the keypoint orientation. A Gaussian weighting function with σ equal to one half the width of the descriptor window is used to assign a weight to the magnitude of each sample point.

We should easily recognize the point by looking at intensity values within a small window. hifting the window in any direction should yield a large change in appearance. 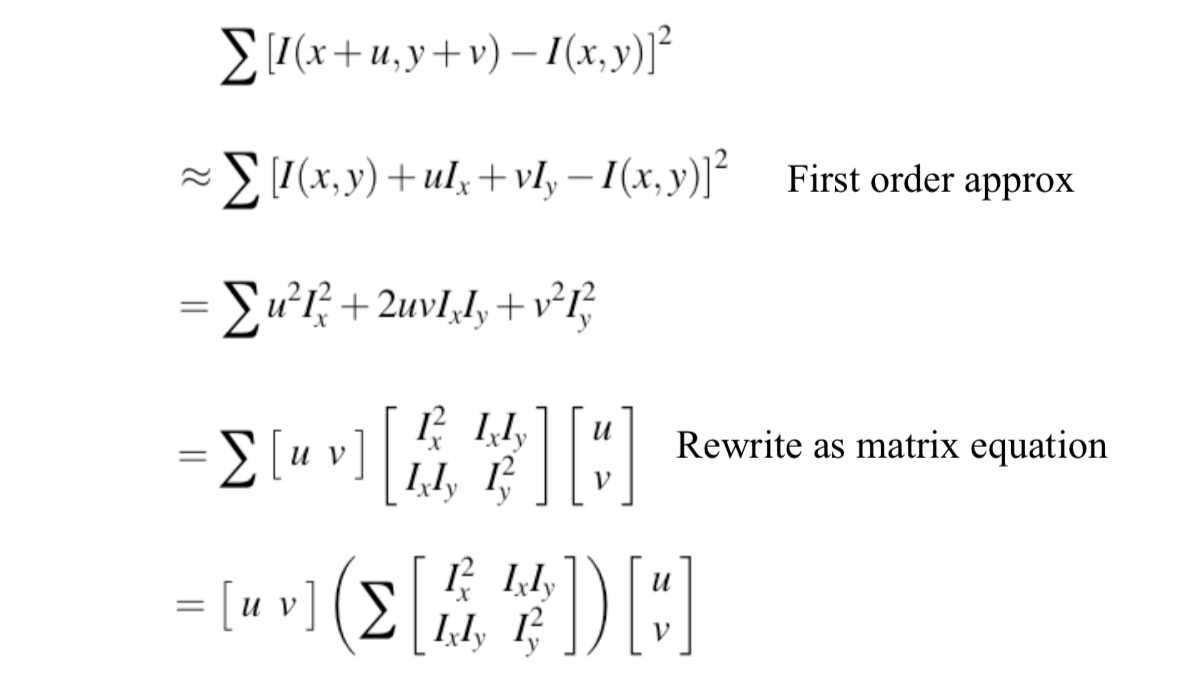 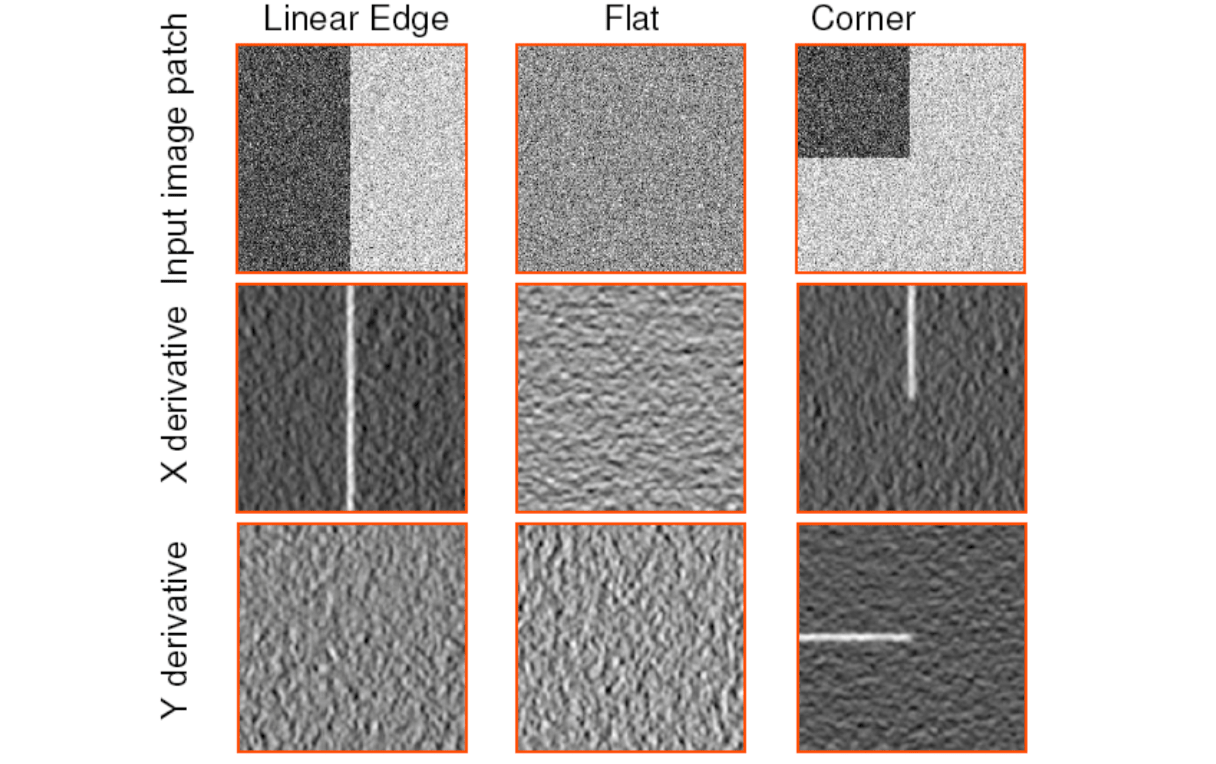 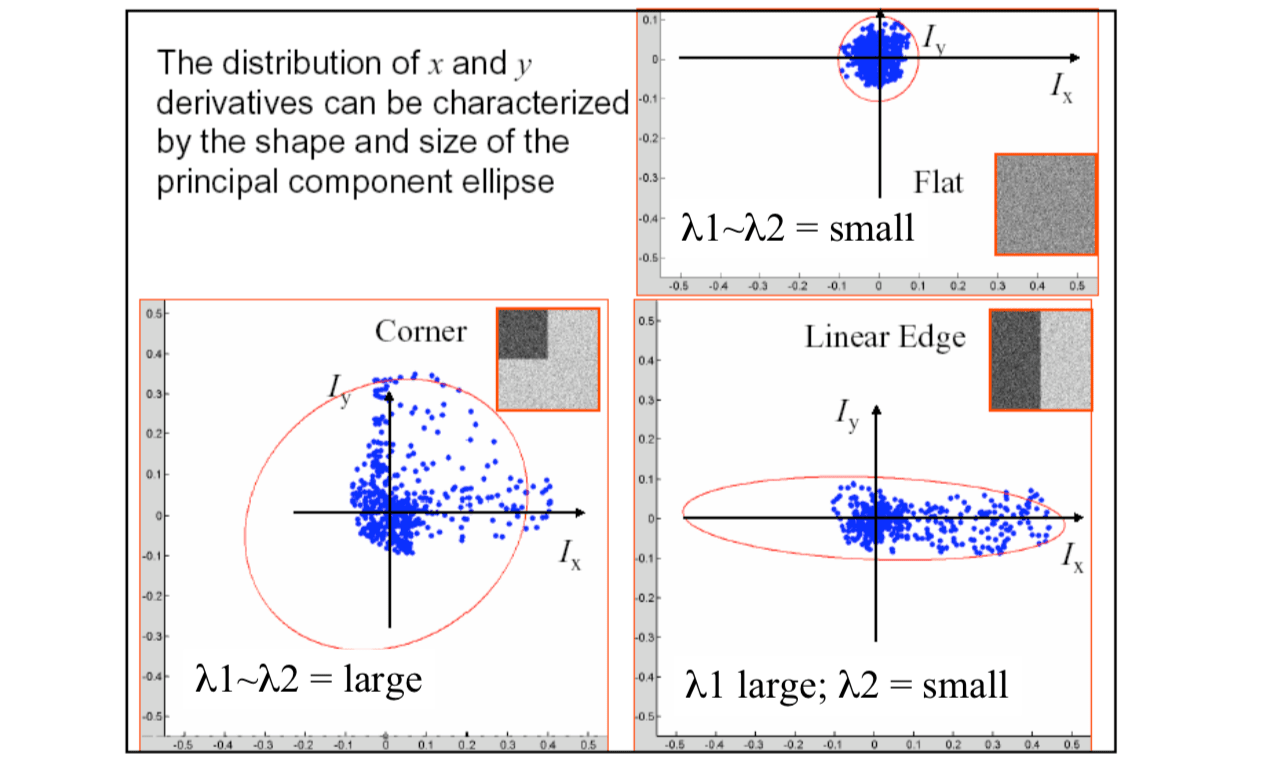 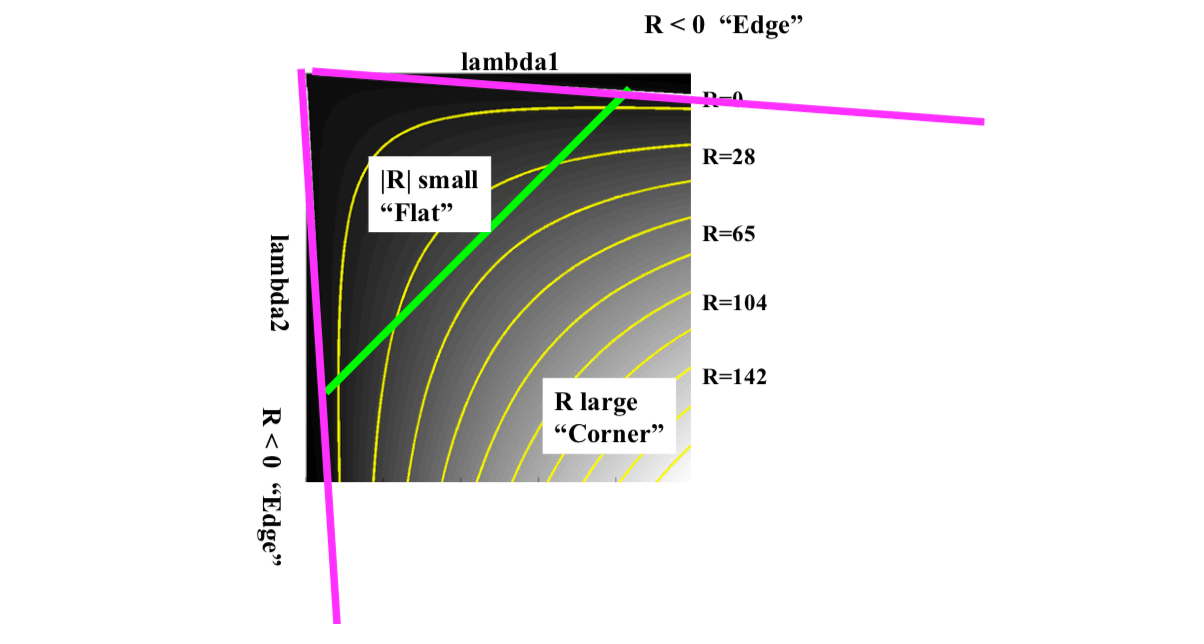