We have two major methods to estimate the value function of an unknown MDP:

We will introduce the two methods and combine them to a general method.

Please refer to https://www.wikiwand.com/en/Blackjack to learn the rule of Blackjack.

If we build an RL agent to play blackjack, the states would have 3-dimension:

So there would be 200 different states.

And reward for action 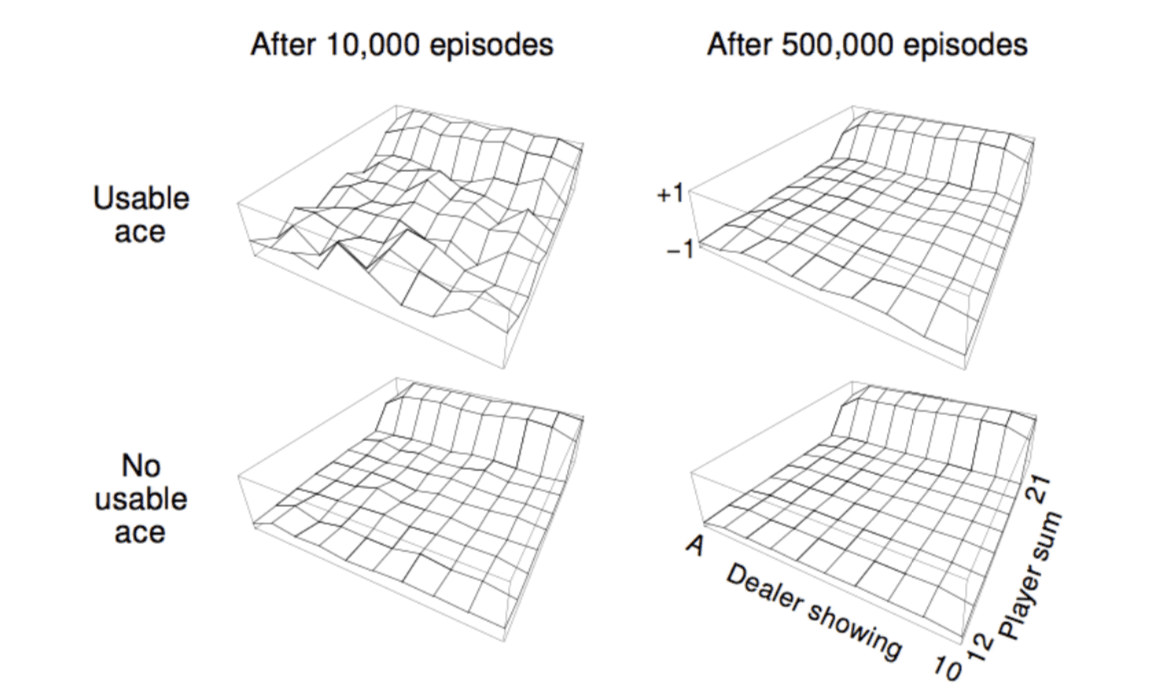 In the above diagrams, the height represents the value function of that point. Since it's a simple policy, the value funtion achieves high value only if player sum is higher than 20.

In non-stationary problems, it can be useful to track a running mean, i.e. forget old episodes, \[ V(S_t)\leftarrow V(S_t) + \alpha(G_t-V(S_t)) \] So, that's the part for Monte-Carlo learning. It's a very simple idea: you run out an episode, look the complete return and update the mean value of the sample return for each state you have visited. 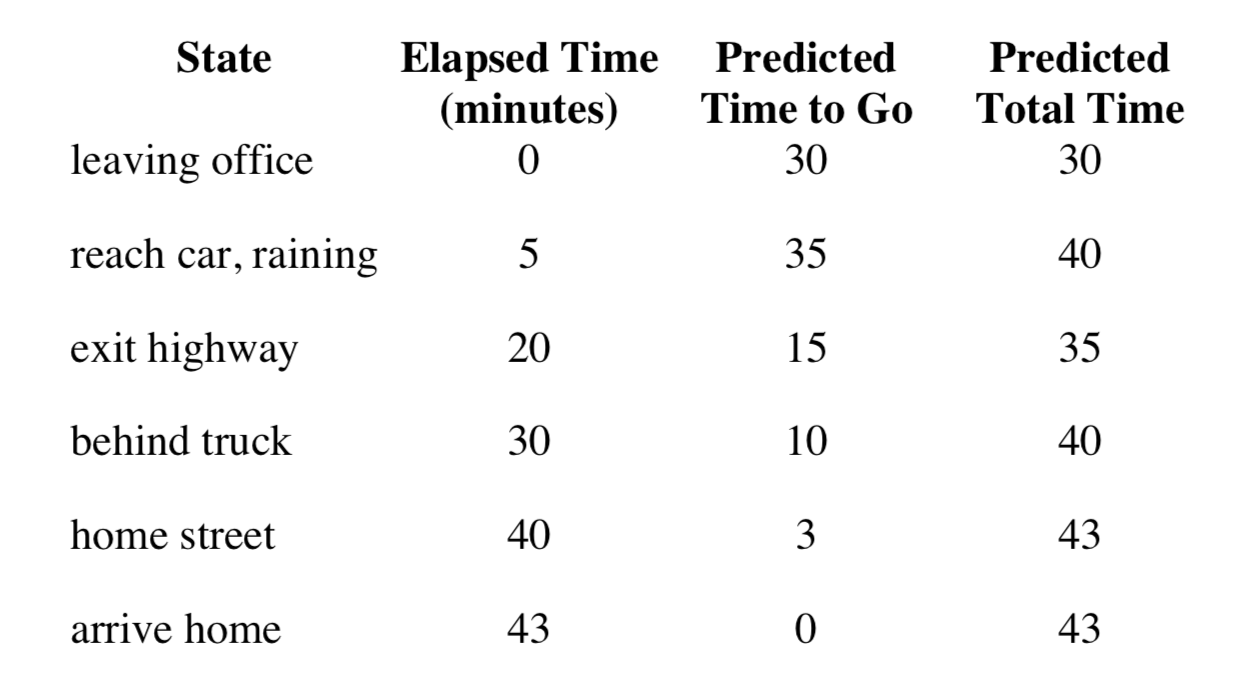 Advantages and Disadvantages of MC vs. TD

TD can learn before knowing the final outcome

TD can learn without the final outcome

TD has low variance, some bias

Explanation of bias and variance:

However, TD target is much lower variance than the return, since

There are several states on a street, the black rectangles are terminate states. Each transition has 0.5 probability and the reward is marked on the line. The question is what is the value function of each state?

Using TD to solve the problem: 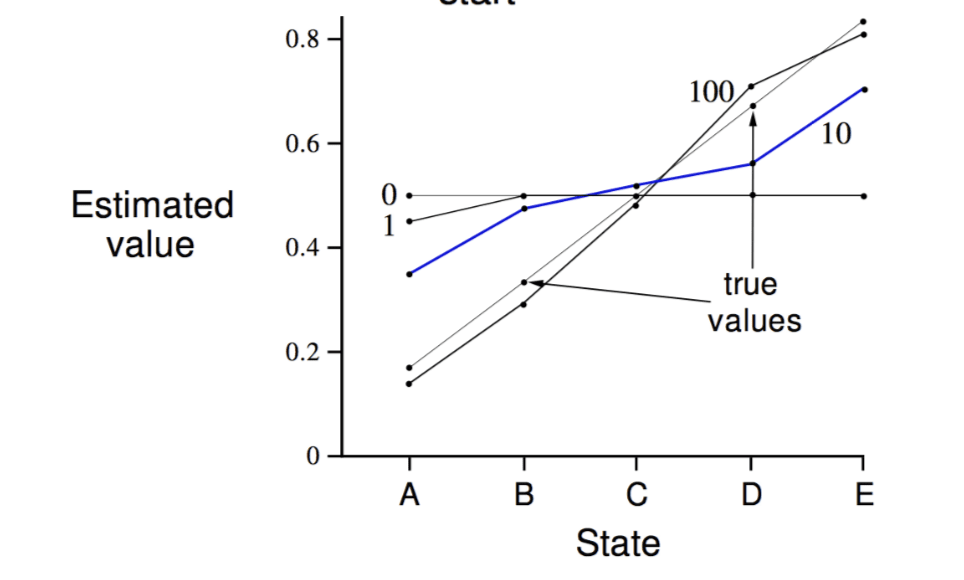 The x-axis represents each state, y-axis represent the estimated value. Each line represents the result of TD algorithm that run different episodes. We can see, at the begining, all states have initial value \(0.5\). After 100 episodes, the line converges to diagonal, which is the true values.

Using MC to solve the problem: 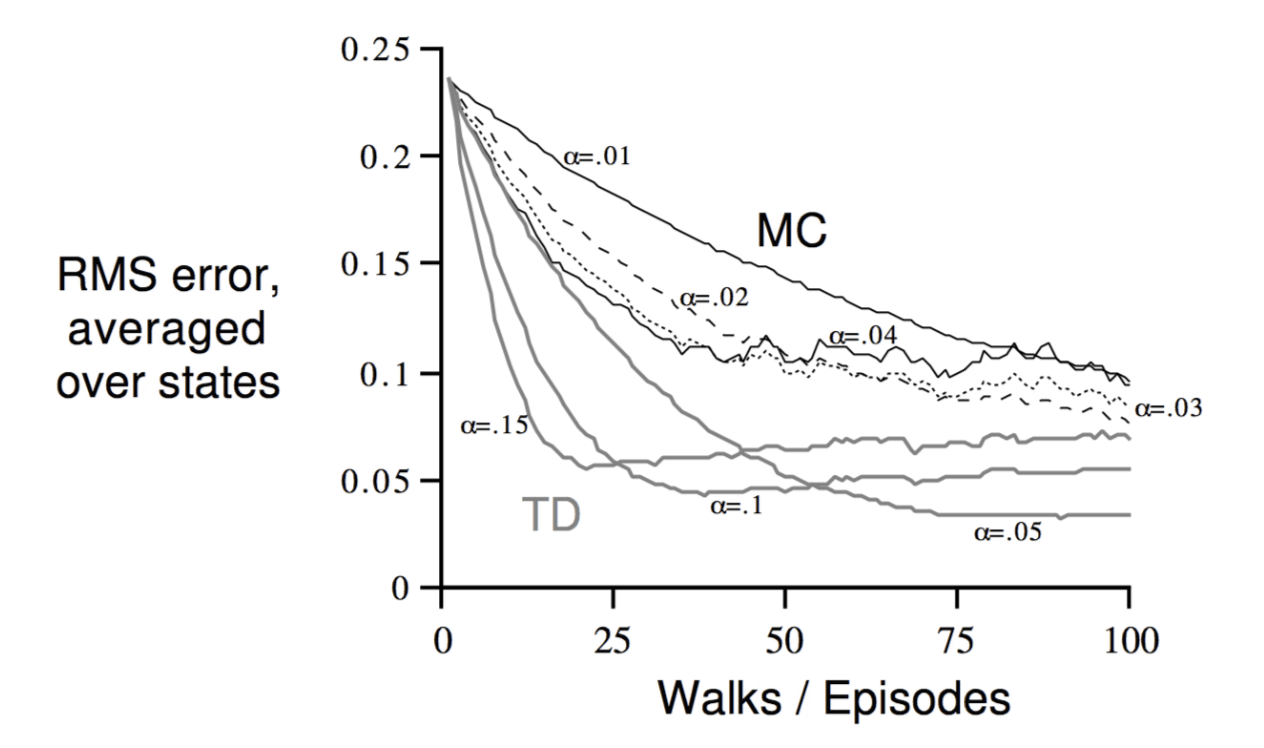 We know that MC and TD converge: \(V(s) \rightarrow v_\pi(s)\) as experience \(\rightarrow \infty\). But what about batch solution for finite experience? If we repeatly train some finite sample episodes with MC and TD respectively, do the two algorithms give same result?

To get more intuition, let's see the AB example.

There are two states in a MDP, \(A, B\) with no discounting. And we have 8 episodes of experience:

The MDP of these experiences can be illustrated as 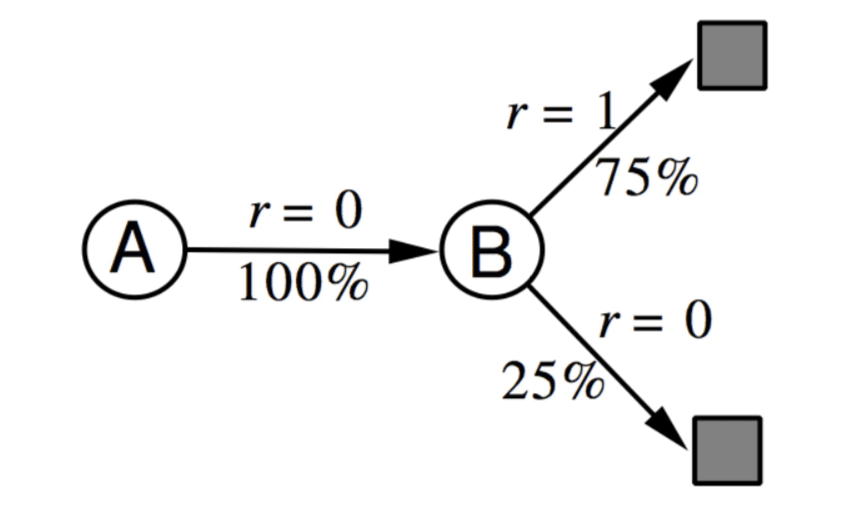 As we show above,

Advantages and Disadvantages of MC vs. TD (2) 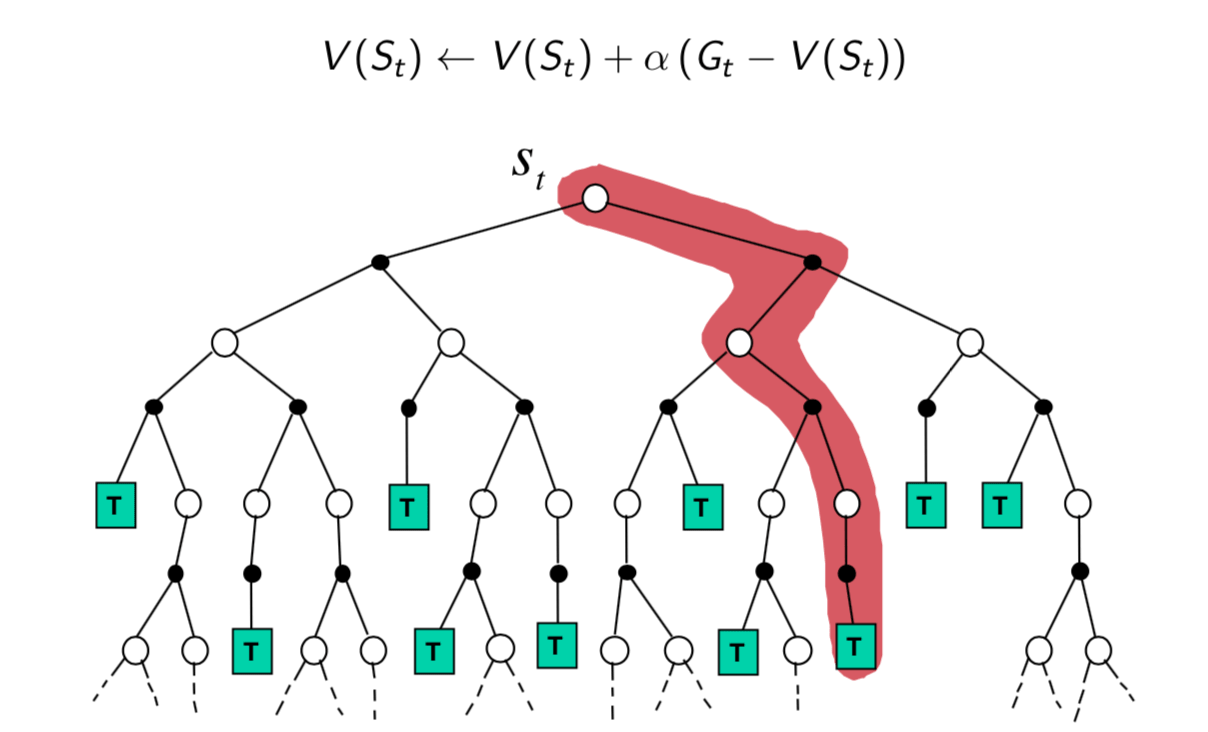 We start from \(S_t\) to look-ahead and build a look-ahead tree. What Monte-Carlo do is to sample a episode until it terminates and use the episode to update the value of state \(S_t\). 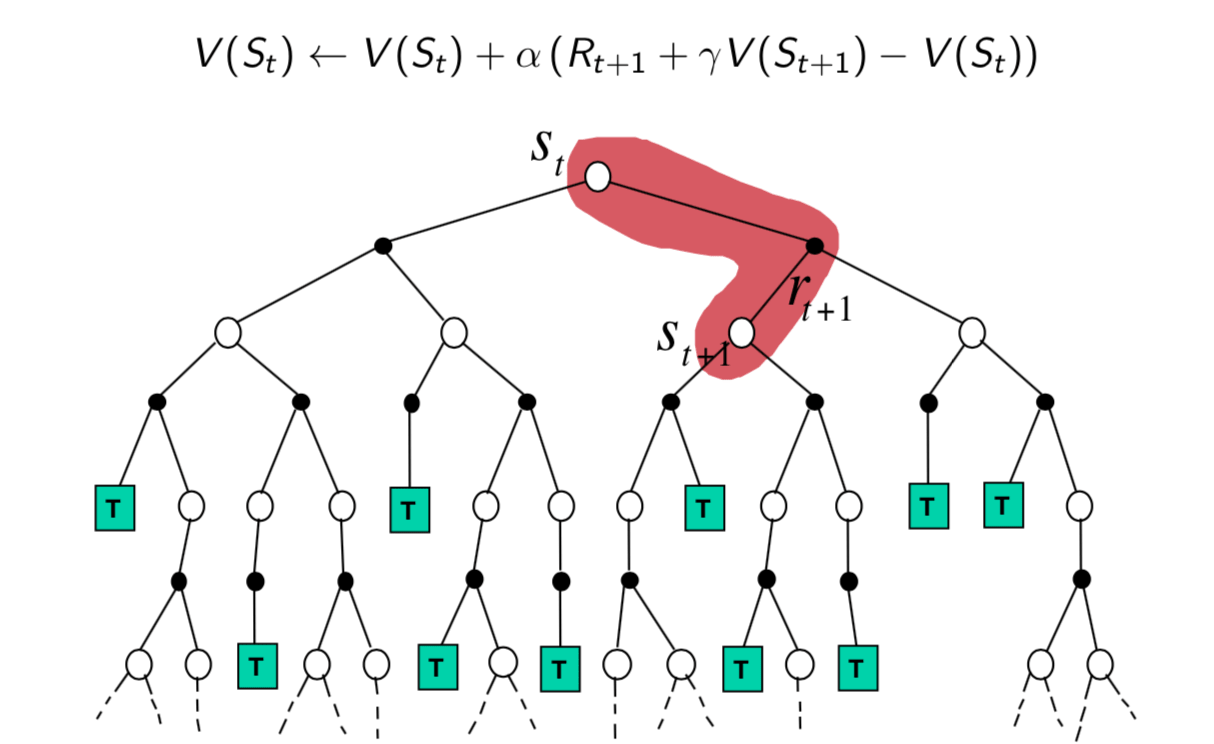 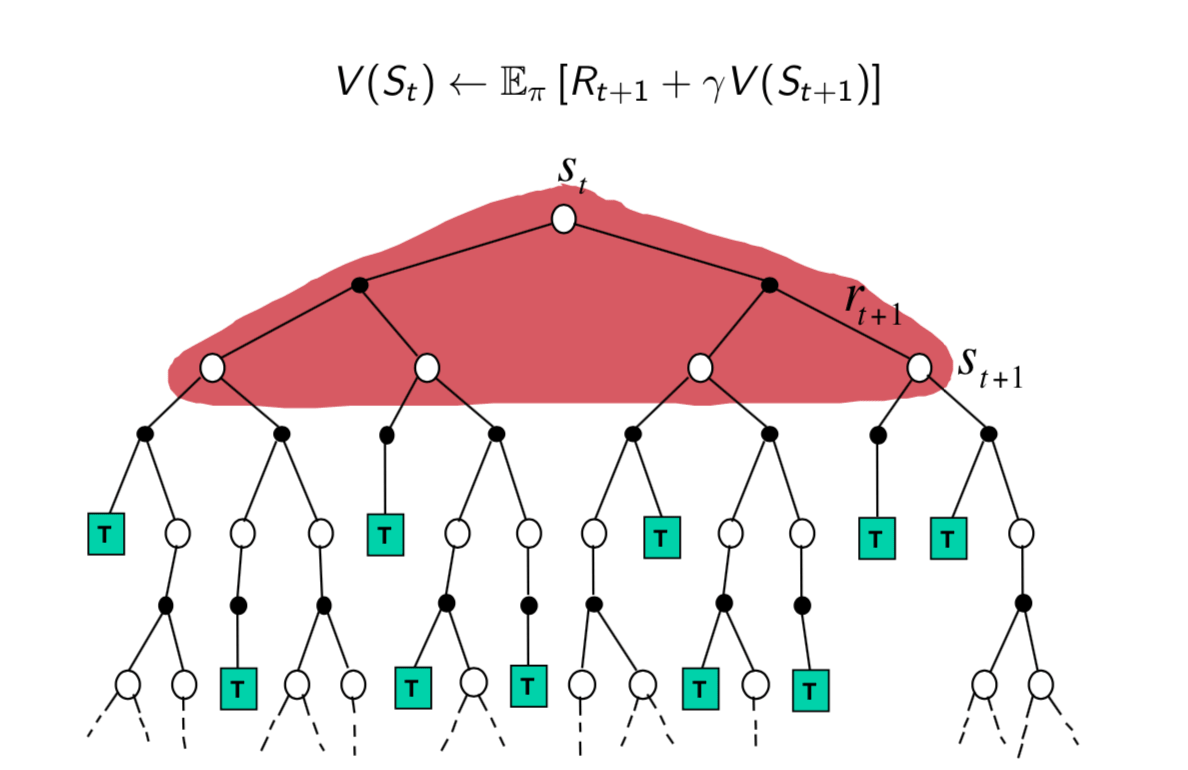 In dynamic programming backup, we do not sample. Since we know the environment, we look all possible one-step ahead and weighted them to update the value of \(S_t\). 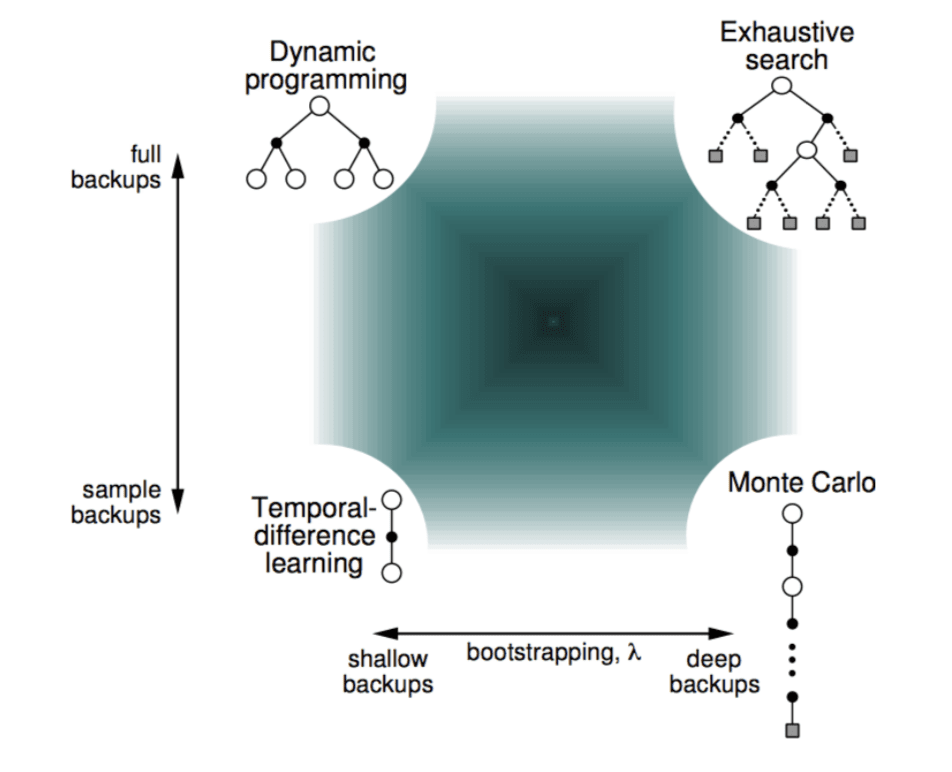 There are some experiments about that: 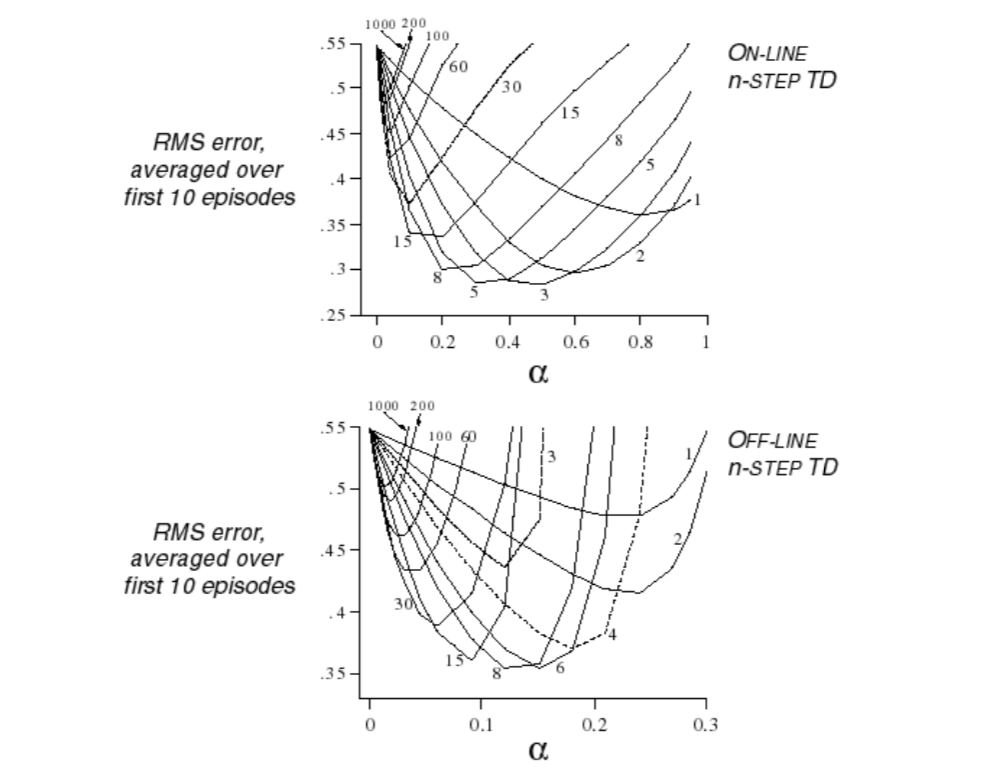 So, you can see that the optimal \(n\) changes with on-line learning and off-line leanring. If the MDP changes, the best \(n\) also changes. Is there a robust algorithm to fit any different situation?

The answer is yes. 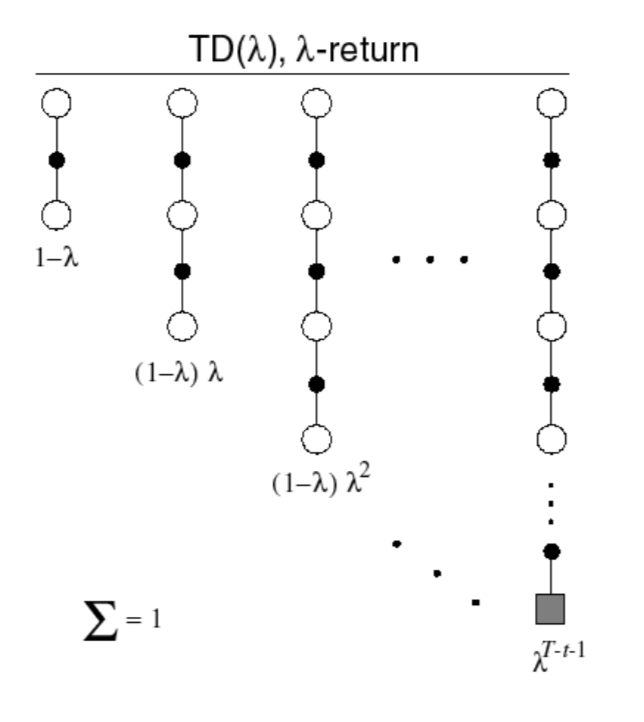 We can see the weight decay geometrically and the weights sum to 1.

The reason we use geometrical decay rather than other weight because it's efficient to compute, we can compute TD(\(\lambda\)) as efficient as TD(0).

Recall the rat example in lecture 1, credit assignment problem: did bell or light cause shock?

Relationship Between Forward and Backward TD

If value function is only updated offline at end of episode, then total update is exactly the same as MC. 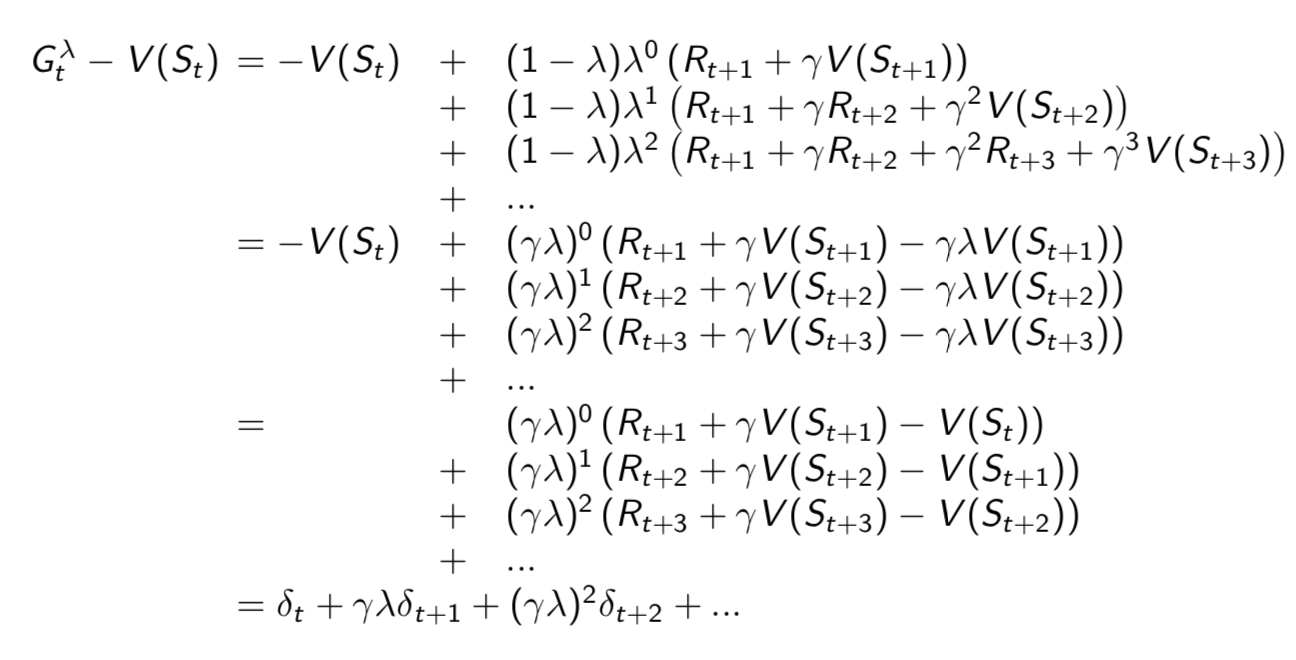 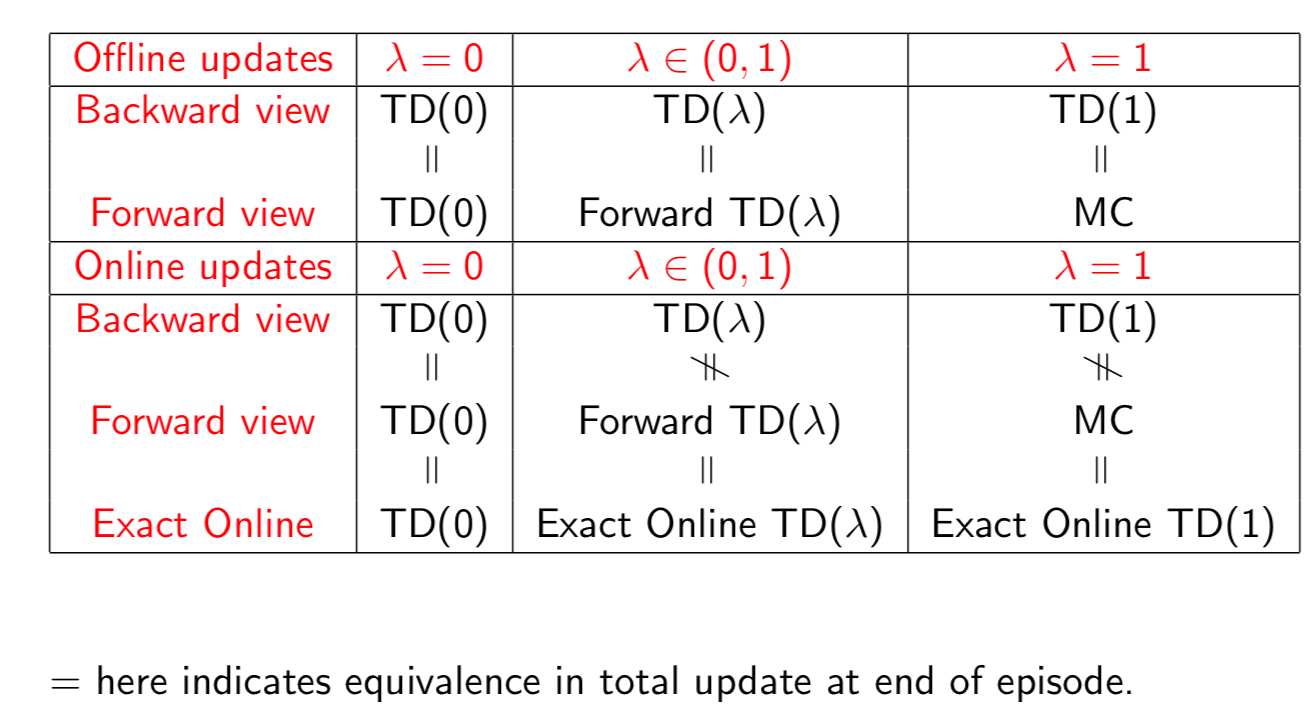 This lecture just talks about how to evaluate a policy given an unknown MDP. Next lecture will introduce Model-free Control.