Basically, Markov decision processes formally describe an environment for reinforcement learning, where the environment is fully observable, which means the current state completely characterises the process.

Almost all RL problems can be formalised as MDPs, e.g.

So, if we solve MDP, we can solve all above RL problems.

The formula means the current can capture all relevant information from the history. Once the state is known, the history may be thrown away, i.e. the state is a sufficient statistic of the future.

We know that given the current state, we can use its information to reach the next state, but how? — It is characterized by the state transition probability.

Formally, a Markov process is a memoryless random process, i.e. a sequence of random states \(S_1, S_2, …\) with the Markov property. 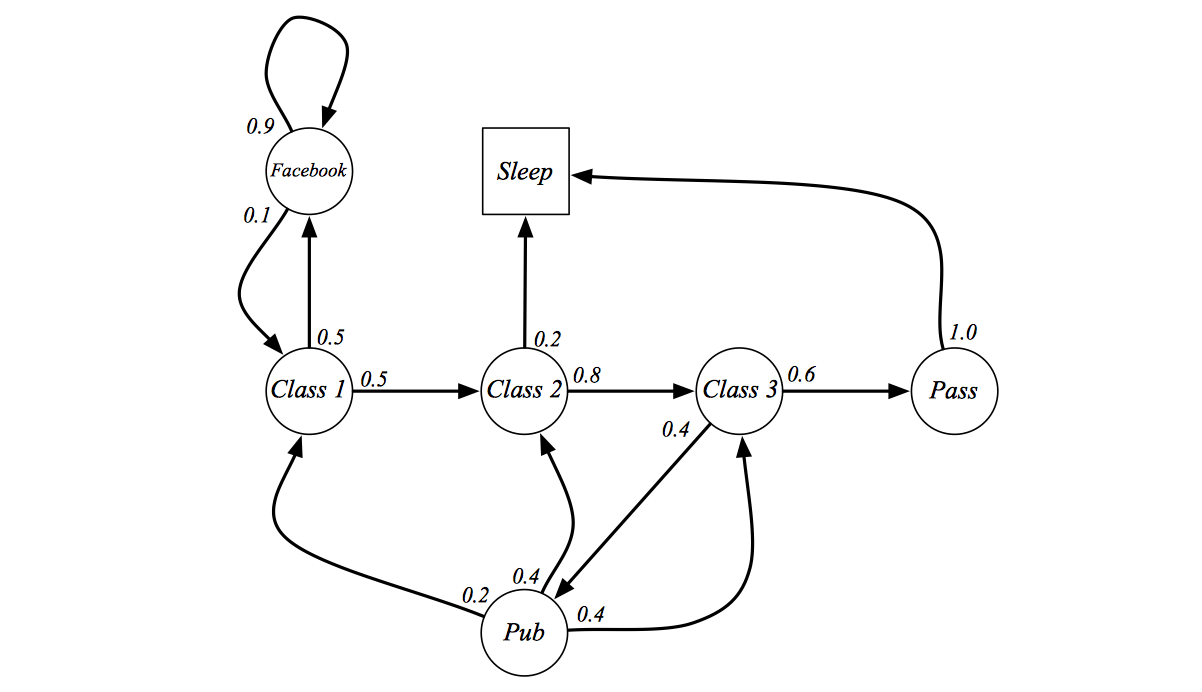 The above figure show a markov chains of a student's life. Process starts from Class 1, taking class 1 may be boring, so he have either 50% probability to look Facebook or to move to Class 2. …. And finally, he reach the final state Sleep. It's a final state just because it is a self-loop with probability 1 which is nothing special.

Also, we can make the transition matrix from such markov chain:

If we have this matrix, we can fully describe the Markov process.

So far, we have never talked about Reinforcement Learning, there is no reward at all. So, let's talk about the Markov Reward Process.

The most important is adding reward to Markov process, so a Markov reward process is a Markov chain with values.

Note that \(R\) is the immediate reward, it characterize the reward you will get if you currently stay on state \(s\).

Let's back to the student example: 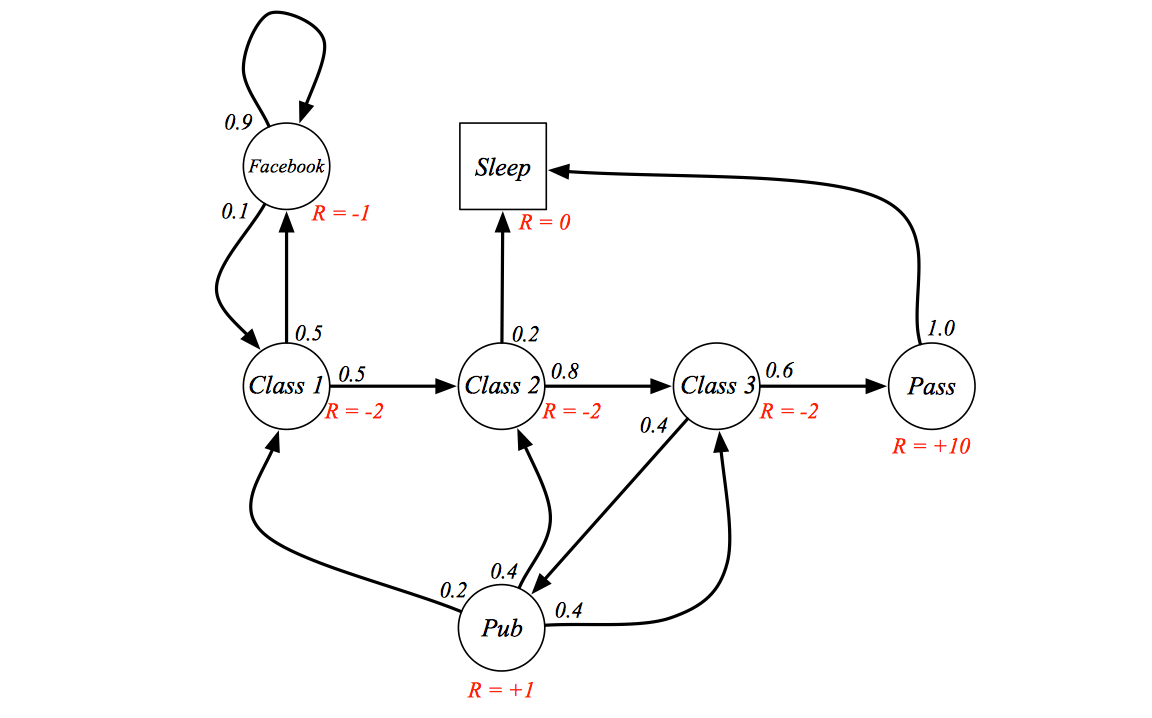 At each state, we have corresponding reward represents the goodness/badness of that state.

Most Markov reward and decision processes are discounted. Why?

We use expectation because it is a random process, we want to figure out the expected value of a state, not such a sequence sampled starts it.

The return is random, but the value function is not random, rather, it is expectation of all samples' return. 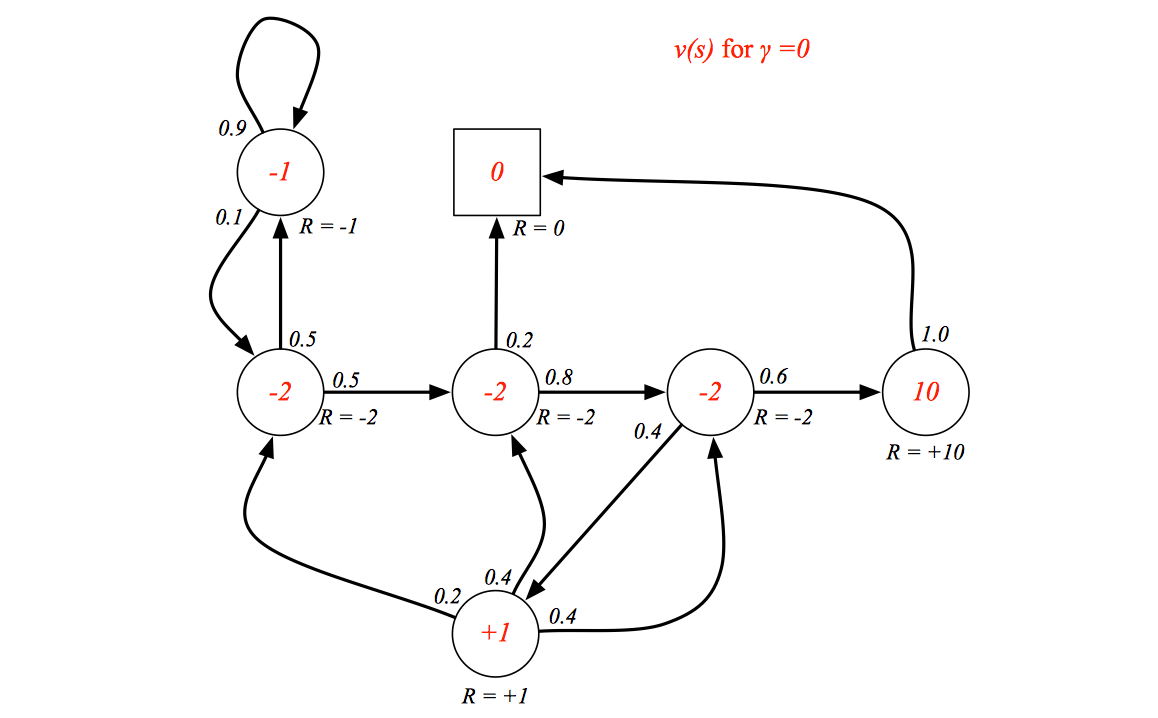 When \(\gamma = 0\), the value function just consider the reward of current state no matter how it changes future. 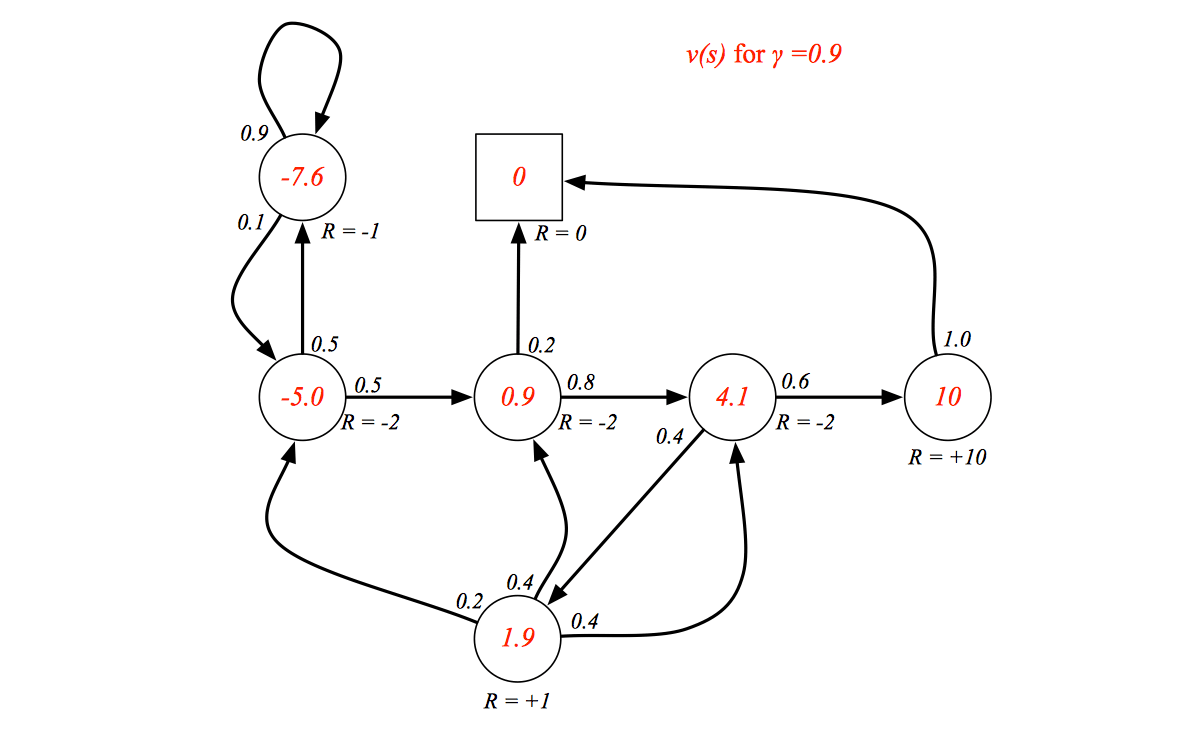 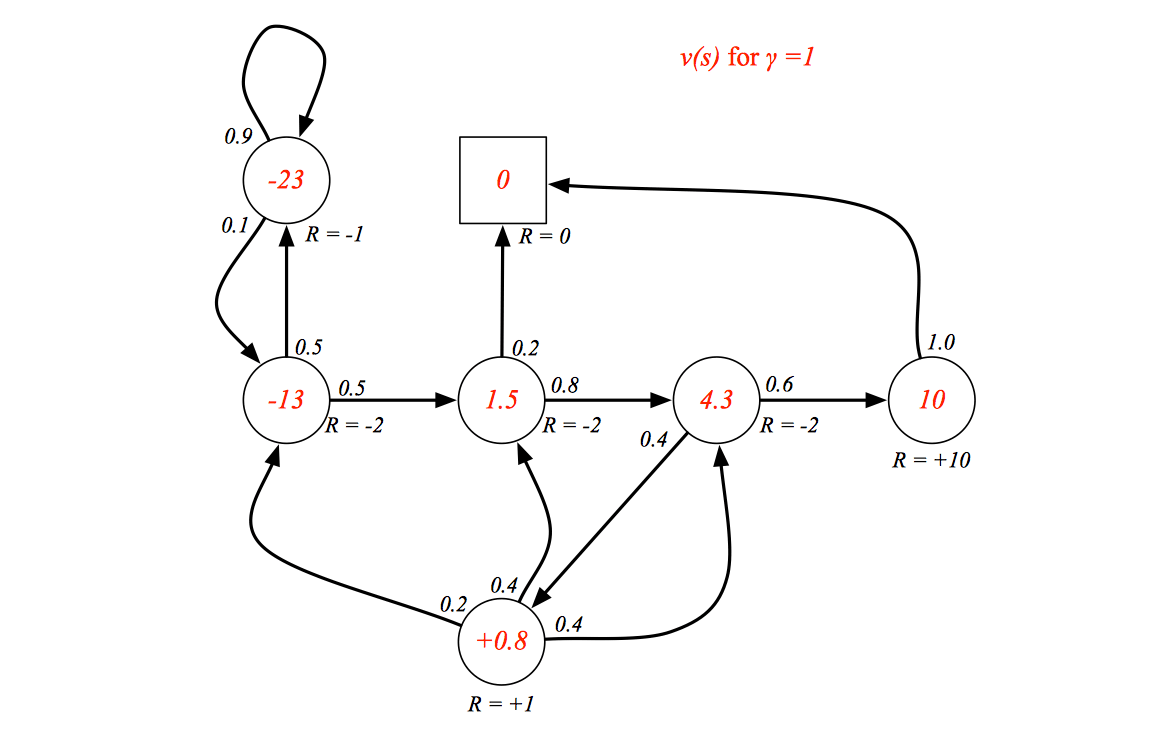 The value function can be decomposed into two parts:

So as to we can apply dynamic programming to solve the value function. 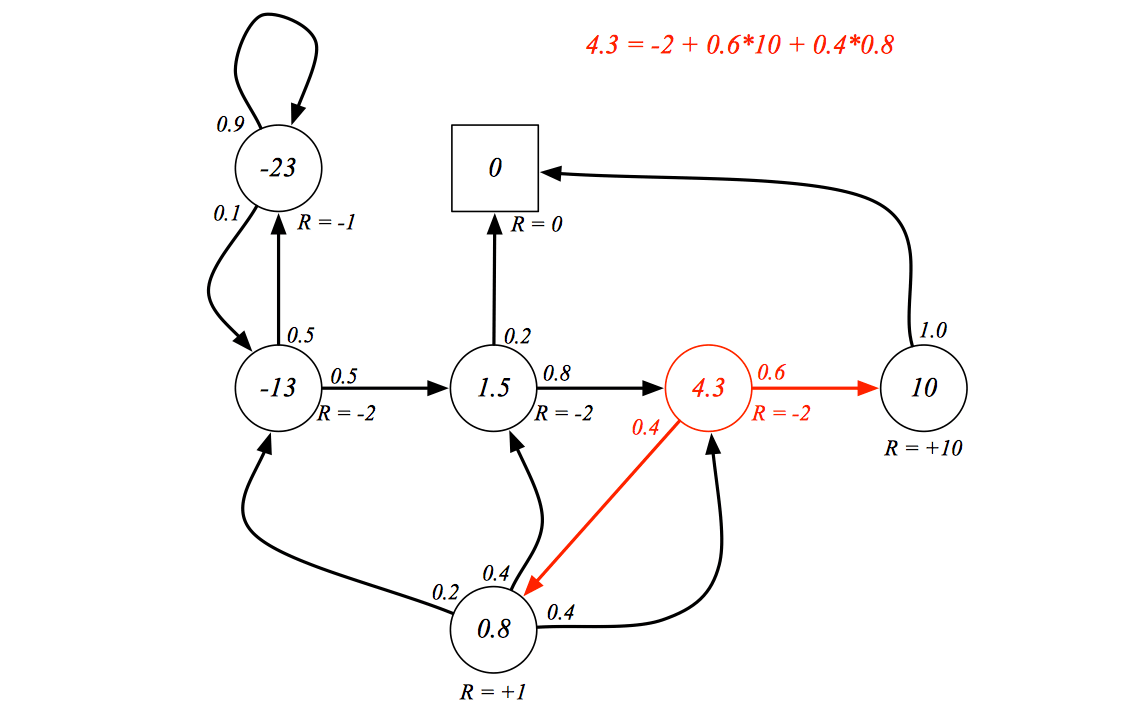 There are many iterative methods for large MRPs, e.g.

So far with MRP, all we want to do is to make decisions, so let's move on Markov Decision Process, which we actually using in RL.

A Markov decision process (MDP) is a Markov reward process with decisions. It is an environment in which all states are Markov. 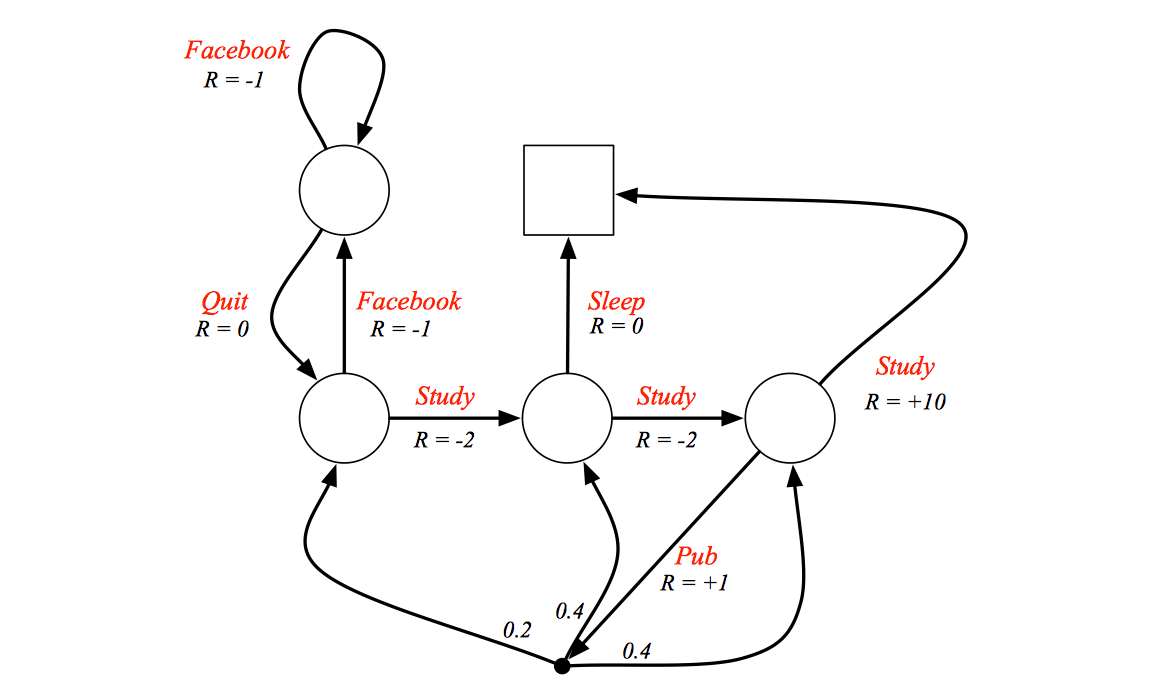 Red marks represents the actions or decisions, what we want to do is to find the best path that maximize the value function.

A policy fully deﬁnes the behaviour of an agent.

Note that MDP policies depend on the current state (not the history), i.e. policies are stationary (time-independent), \(A_t~\pi(\cdot|S_t), \forall t>0\).

An MDP can transform into a Markov process or an MRP: 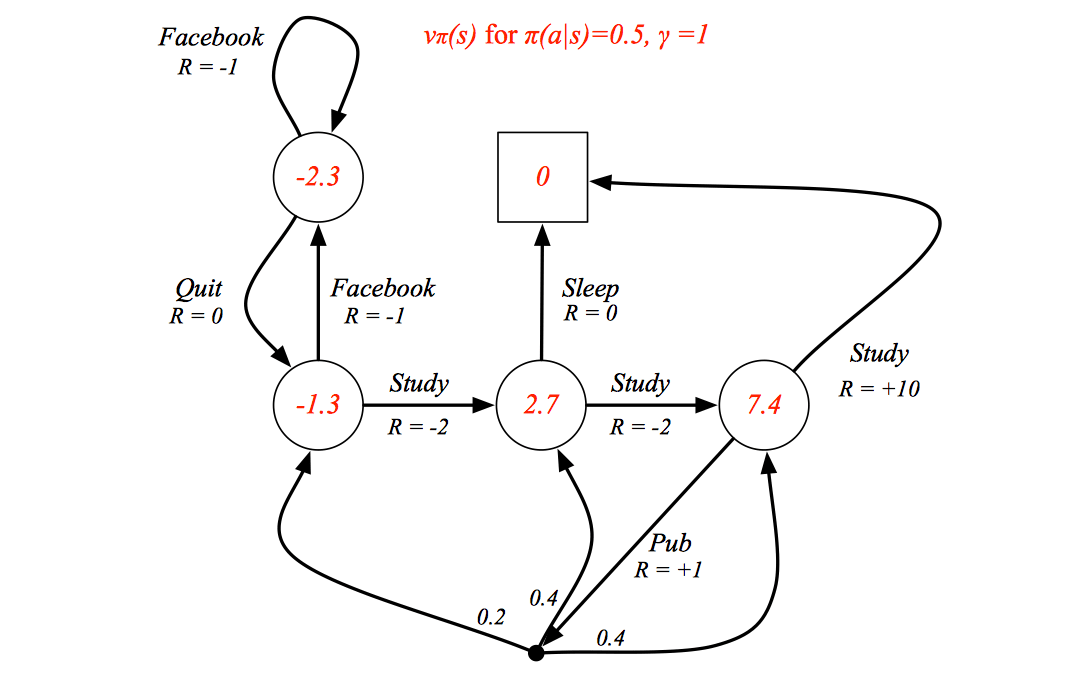 \[ v_\pi(s)=\sum_{a\in\mathcal{A}}\pi(a|s)q_\pi(s,a) \] The look-ahead approach is taking an action and computing its reward, all we need to do is to averaging all possible actions' rewards, which is equal to current state-value. 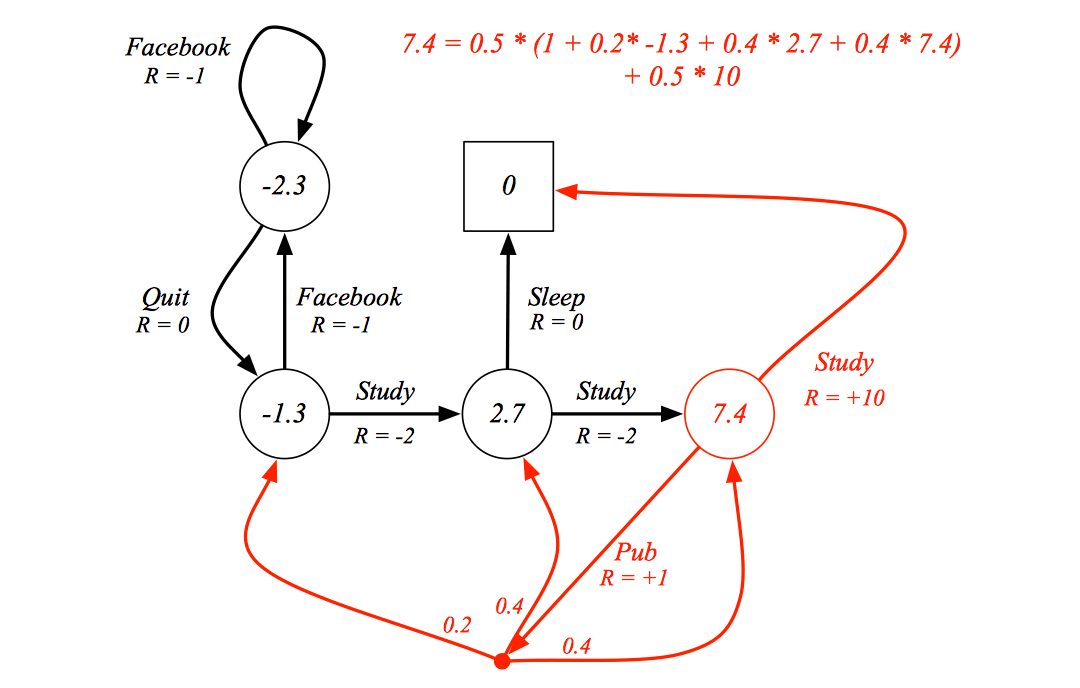 The optimal value function speciﬁes the best possible performance in the MDP.

If we know the \(q_*(s,a)\), we "solve" MDP because we know what actions should take at each state to maximize the reward. 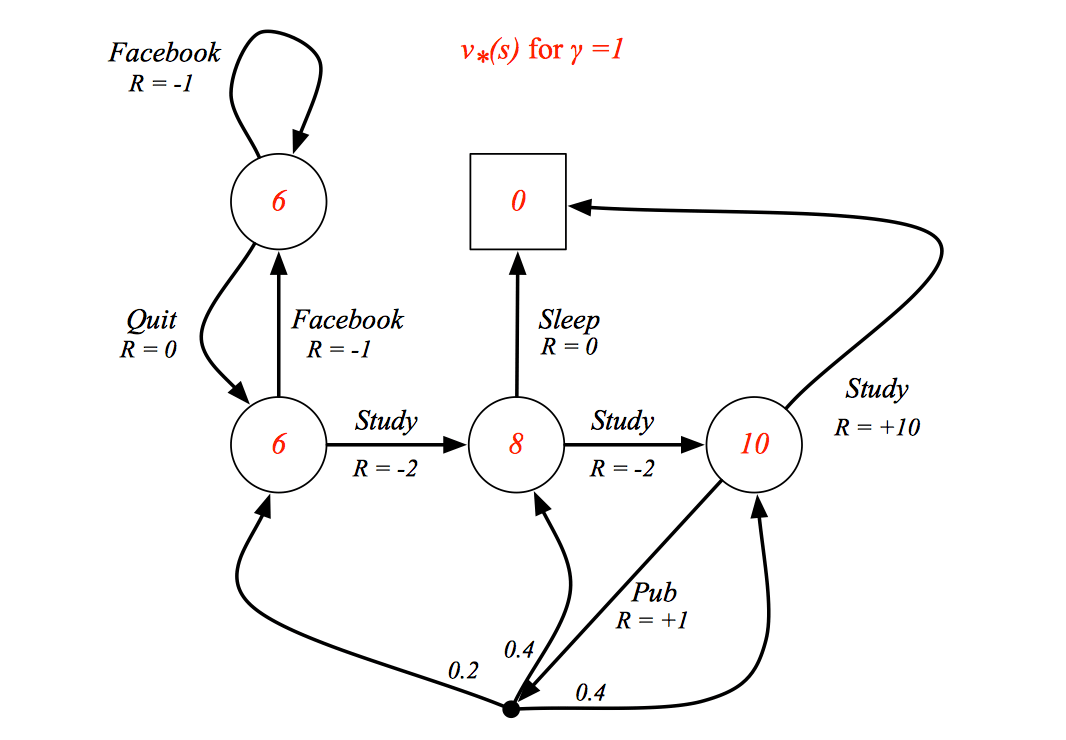 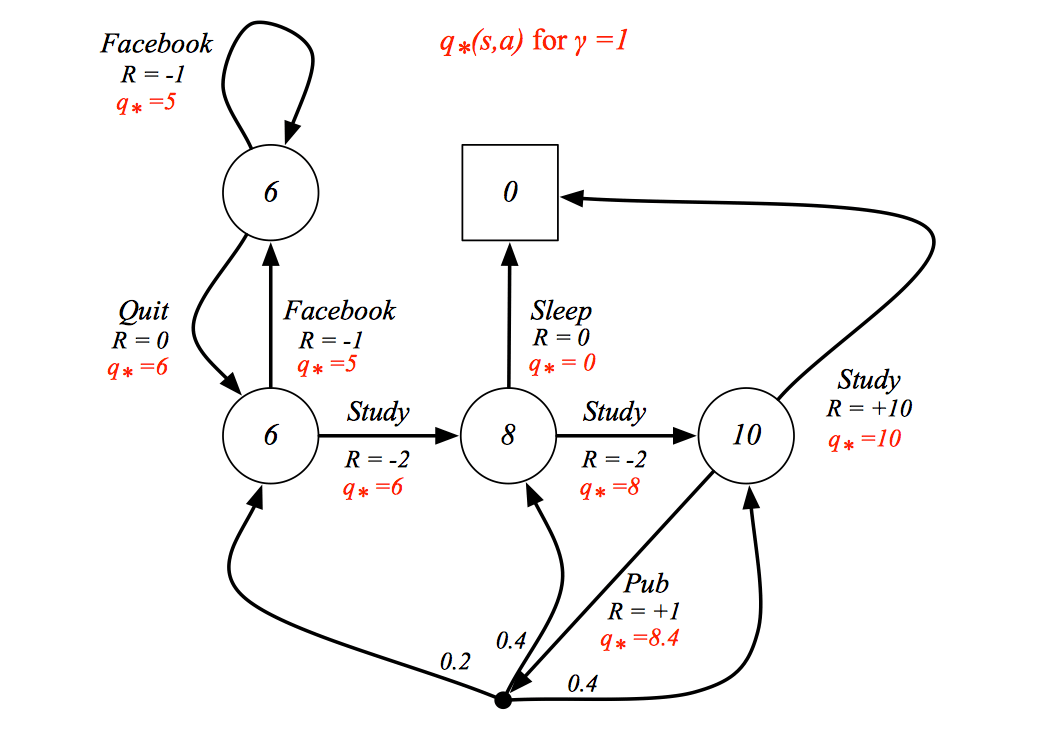 There is always a deterministic optimal policy for any MDP. So if we know \(q_∗ (s, a)\), we immediately have the optimal policy. 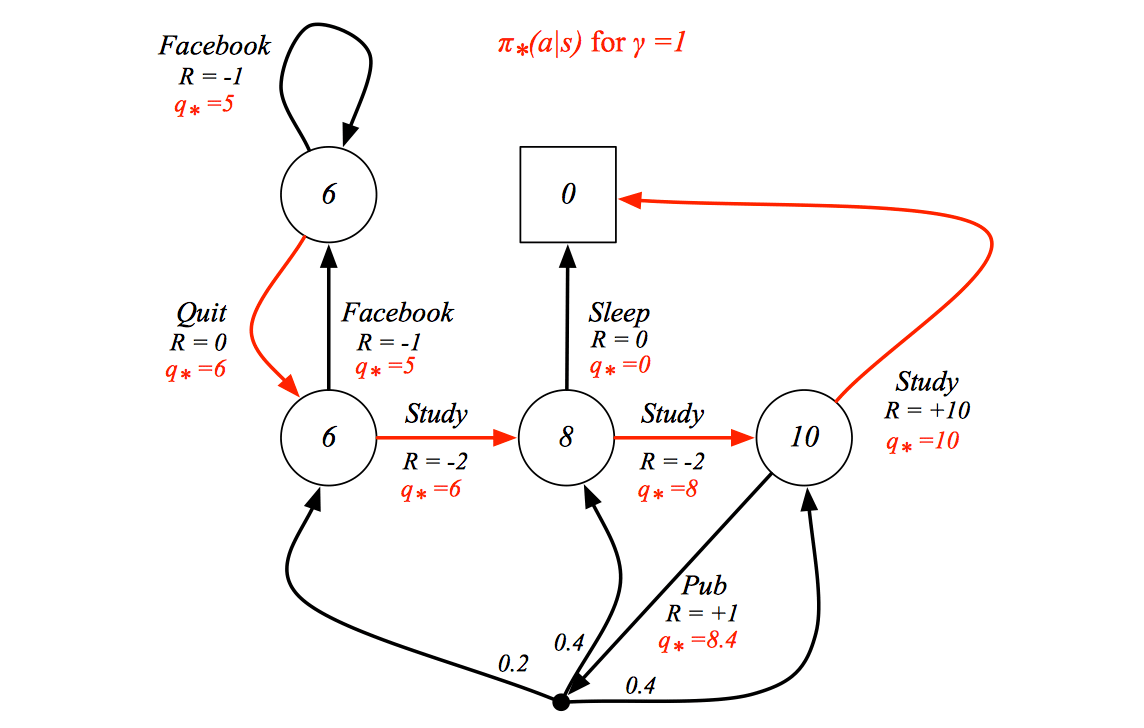 The optimal value functions are recursively related by the Bellman optimality equations: 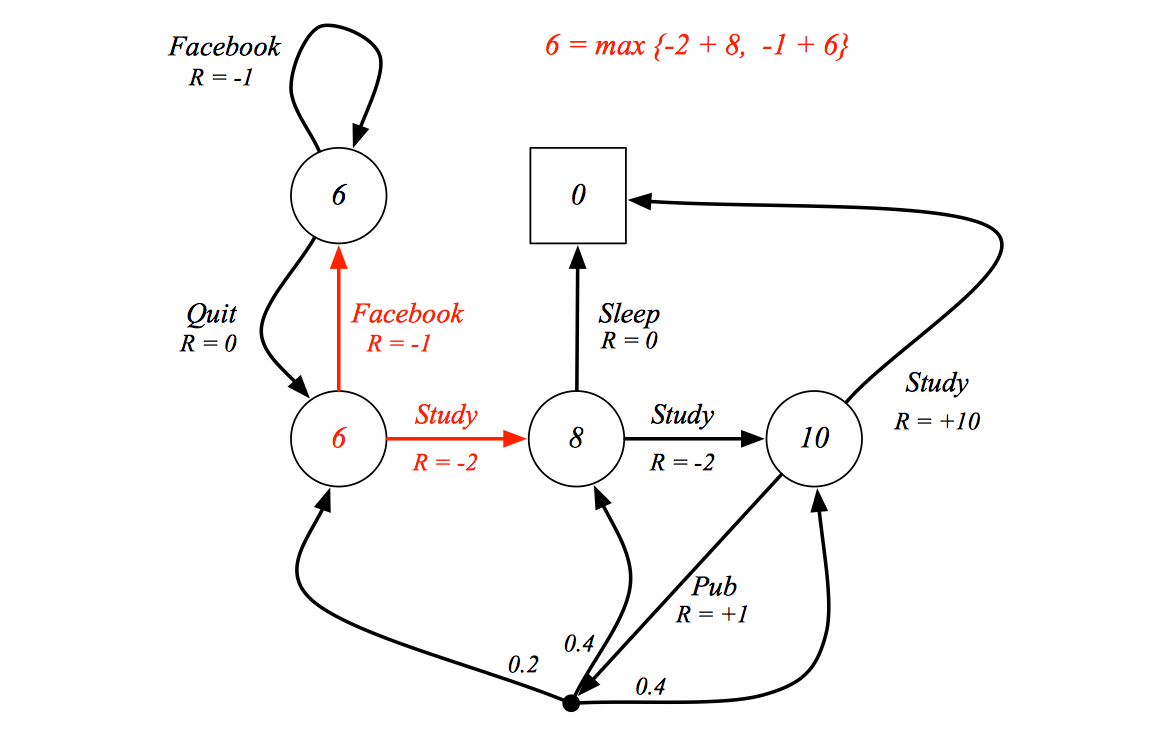 Bellman Optimality Equation is non-linear, so it is not able to be sovle as solving linear equation. And there is no closed from solution (in general).

End. Next note will introduce how to solve the Bellman Optimality Equation by dynamic programming.