A language model assigns a probability to a sequence of words, given the observed training text, how probable is this new utterance?

A good model assigns real utterances \(w_1^N\) from a language a high probability. This can be measured with cross entropy: \[ H(w_1^N) = -\frac{1}{N}\log_2p(w_1^N) \] Intuition : Cross entropy is a measure of how many bits are needed to encode text with our model.

Language modelling is a time series prediction problem in which we must be careful to train on the past and test on the future.

If the corpus is composed of articles, it is best to ensure the test data is drawn from a disjoint set of articles to the training data.

If both have count 0 our smoothing methods will assign the same probability to them.

A better solution is to interpolate with the bigram probability. 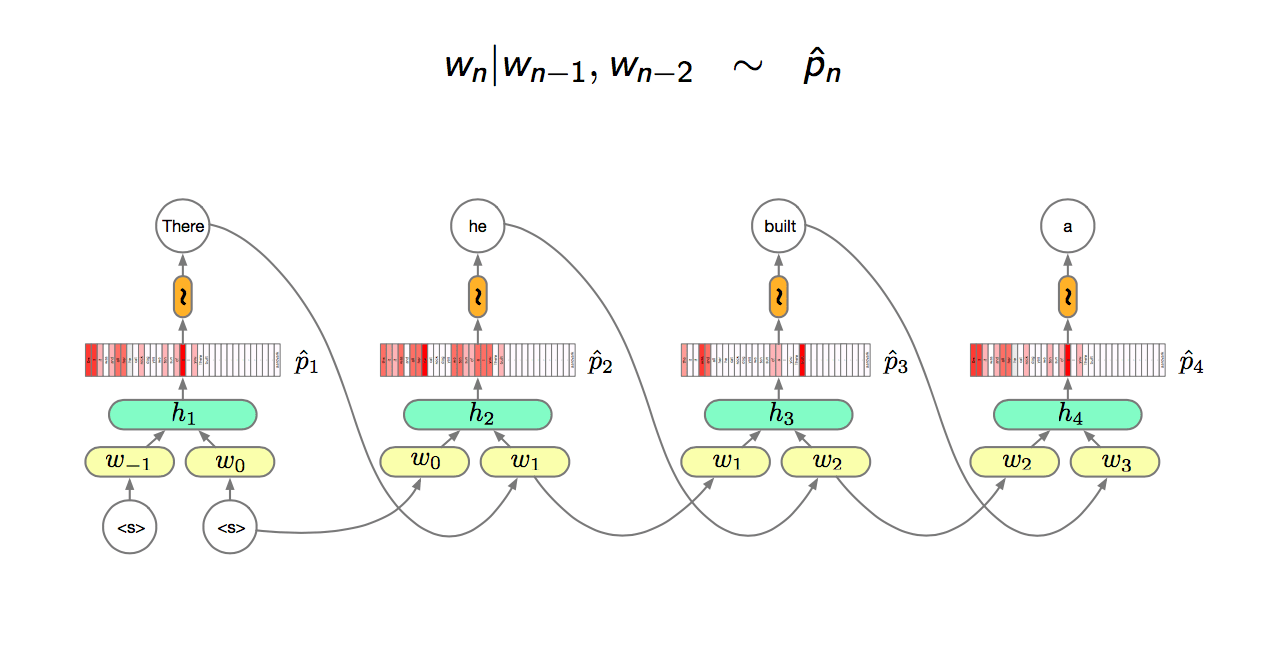 Comparison with Count Based N-Gram LMs 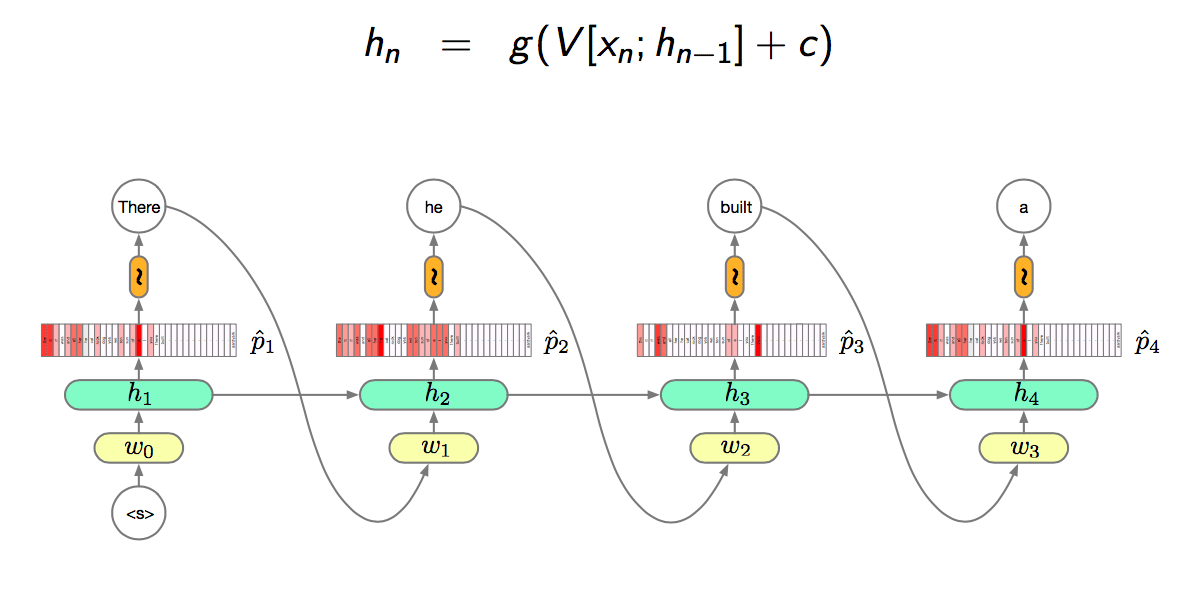 Back Propagation Through Time (BPTT) note the dependence of derivatives at time \(n\) with those at time \(n + \alpha\).

If we break these dependencies after a fixed number of time steps we get Truncated Back Propagation Through Time (TBPTT).

Consider the path of partial derivatives linking a change in \(cost_N\) to changes in \(h_1\):

The core of the recurrent product is the repeated multiplication of \(V_h\). If the largest eigenvalue of \(V_h\) is:

Most of the time the spectral radius of \(V_h\) is small. The result is that the gradient vanishes and long range dependencies are not learnt.

The original RNN is: 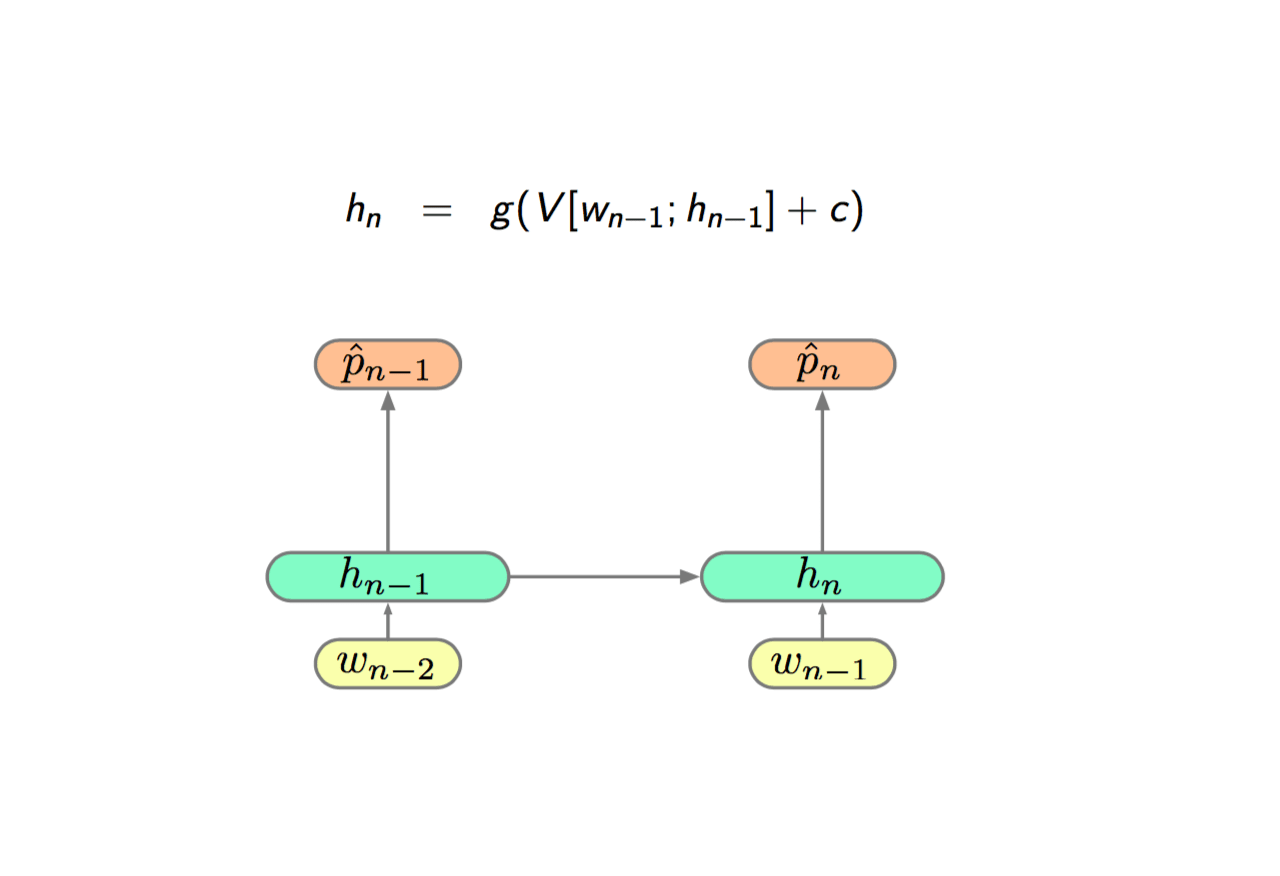 Then adding a linear layer of current input and previous state and then going through a tanh non-linearity before passing to the current state: 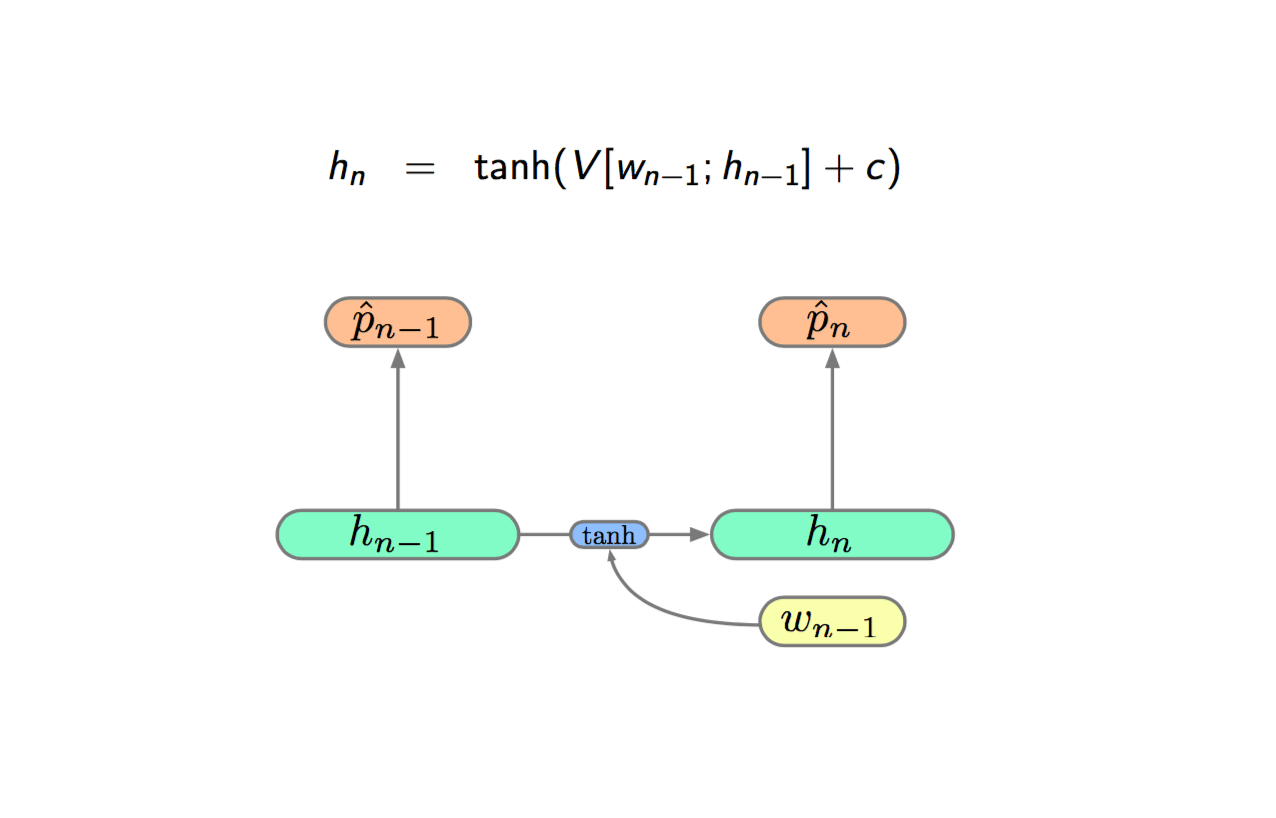 The next step is to introduce an extra hidden layer called cell-state (\(c\)), and think it as our memory. The really cool thing is that propagation is additive. The key innovation of LSTM is replacing the multiplication with sum. 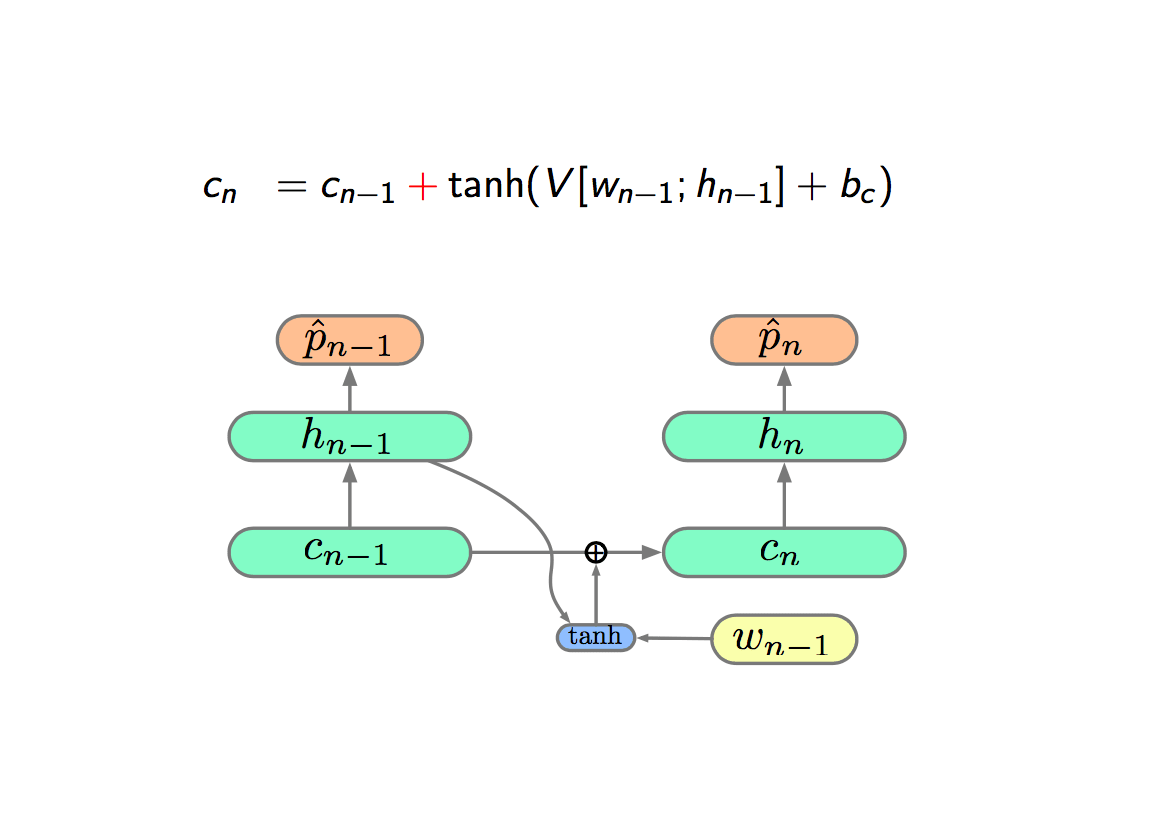 How to balance the grow of addition?

The method is called Gating. So we are going to do is gating the input of the hidden layer, which is called input gate, represented by \(i\). The gate in neural network, is to compute a non-linearity, which is bound between 0 and 1. We think it like a switch, if 1, we turn on the connection and if 0, we shut off the connection. The key thing is the gate is not a decret binary function but a continuous function, thus we can differentiate and back propagation through it. 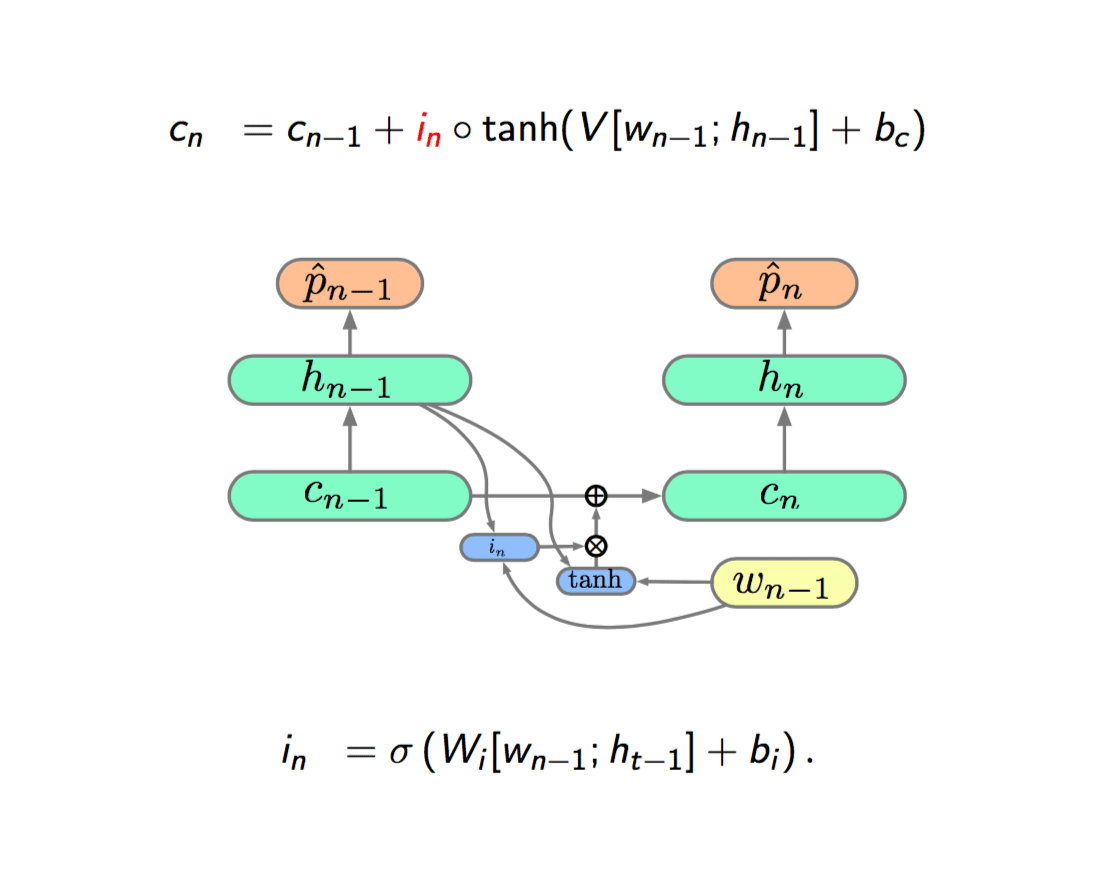 We already have the ability to include or ignore the input, but we can't forget things. So next we are going to add a forget gate, represented by \(f\). 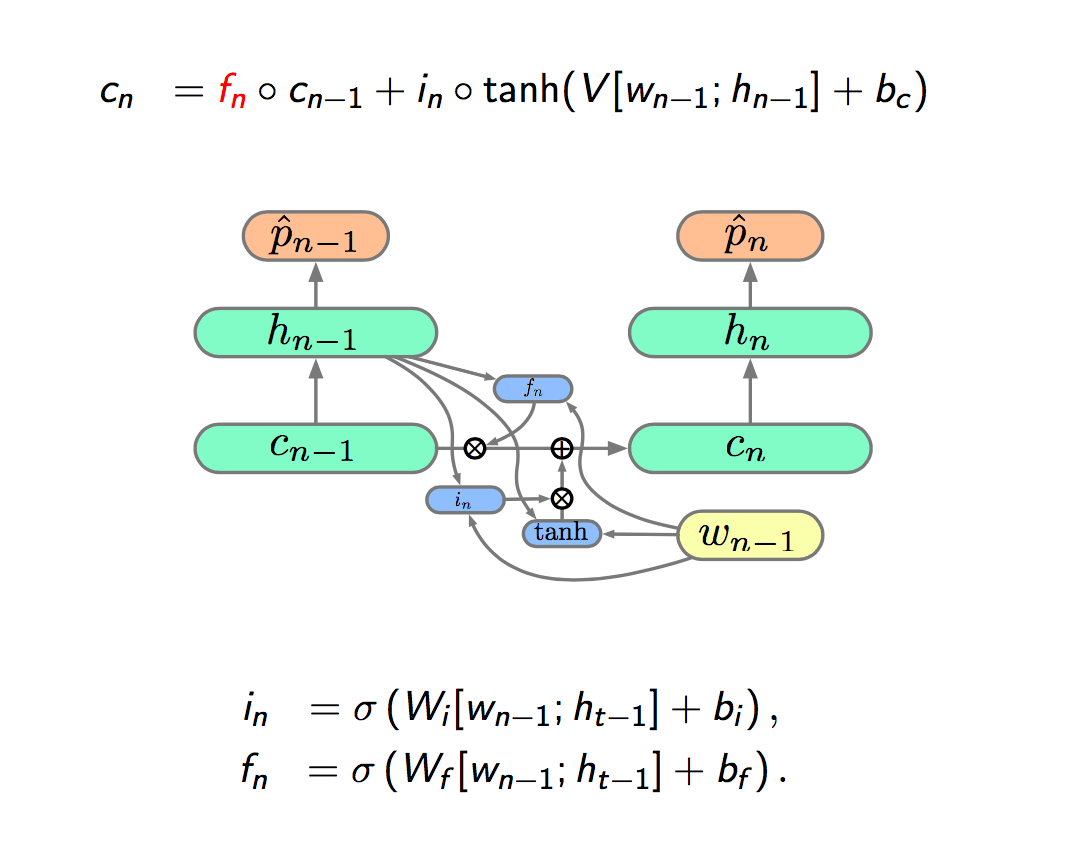 So given the \(i\) and \(f\), our network has the ability to include something new and decide what to remember depend on the input to the next cell state.

The final step is to add a output gate, represented by \(o\), between the cell state to the current state. 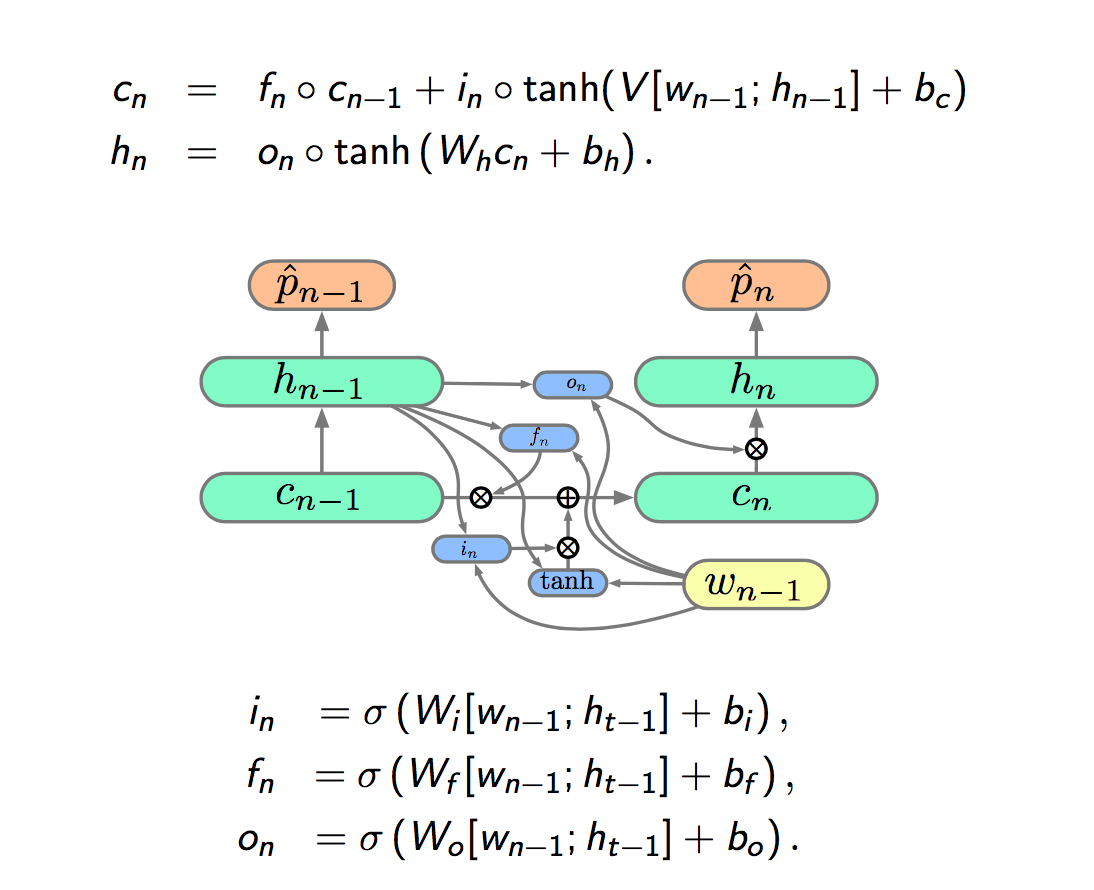 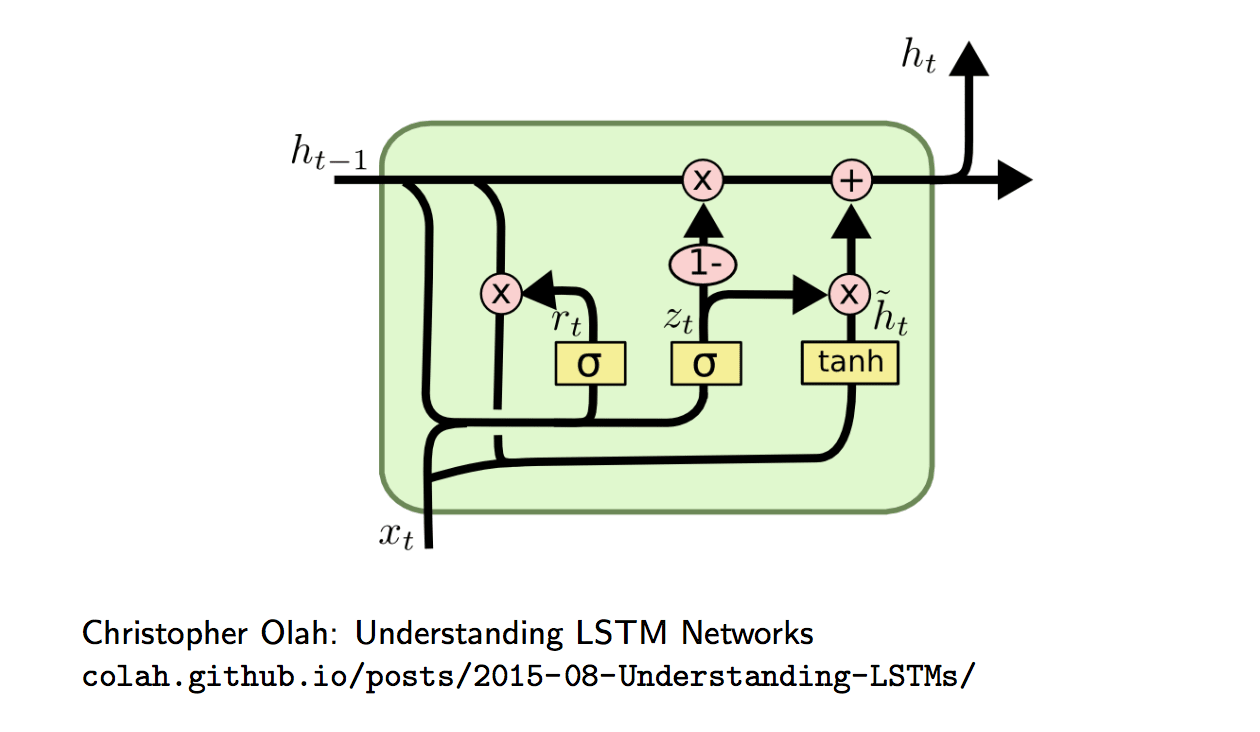 The memory capacity of an RNN can be increased by employing a larger hidden layer \(h_n\), but a linear increase in \(h_n\) results in quadratic increase in model size and compution:

Alternatively we can increase depth in the time dimension. This improves the representational ability, but not the memory capacity.

A common approach in Deep Learning is to overparametrise a model, such that it could easily memorise the training data, and then heavily regularise it to facilitate generalisation.

The regularisation method of choice is often Dropout.