​ A Bloom filter is a space-efficient probabilistic data structure, conceived by Burton Howard Bloom in 1970, that is used to test whether an element is a member of a set. False positive matches are possible, but false negatives are not – in other words, a query returns either "possibly in set" or "definitely not in set". Elements can be added to the set, but not removed (though this can be addressed with a "counting" filter); the more elements that are added to the set, the larger the probability of false positives.

​ Figure 1 An example of Bloom Filter

​ In order to store multi-dimension data, for example \(l\) dimensions, we can simply use \(l\) basic Bloom Filters to store each dimension, which called a Multi-dimension Bloom Filter (MDBF). When we want to identify whether element \(x\) is in the set, just compute \(BBF_1[x_0], ..., BBF_l[x_{l-1}]\), if all of them equal to \(1\), then we consider \(x\) is one of the elements of the set. Similarly as the basic Bloom Filter, such multi-dimension Bloom Filter may also yield a false positive. However, if one of them equals to \(0\), the element \(x\) certainly not belong to this set. Figure 2 illustrates that how a MDBF works. 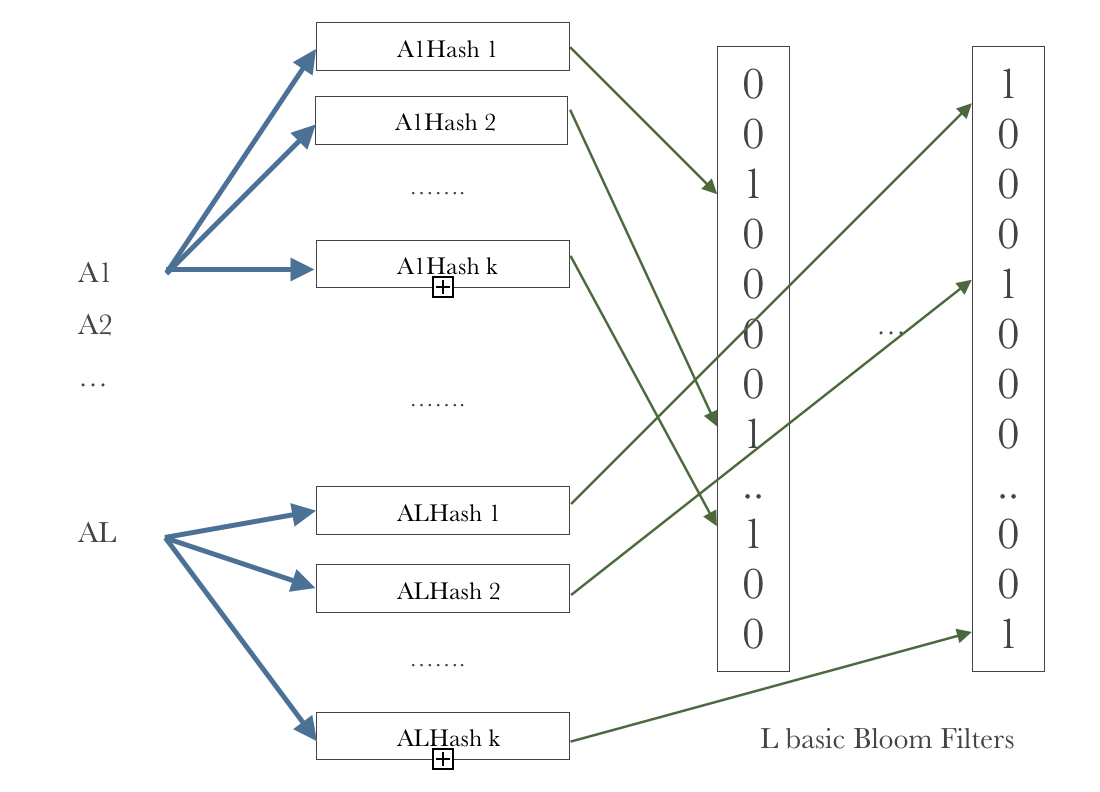 ​ Nonetheless, the false positive rate of such MDBF is not as ideal as expected, because it may give a false positive even if none of the basic Bloom Filters makes a false decision. For example, we have a set \(S = \{(red, blue), (blue, black)\}\) and we want to figure out whether \((red, black)\) is in \(S\). So the first BBF would say that is an attribute of the set and the second BBF says \(black\) is also an attribute of \(S\), so the MDBF thinks \((red, black)\) is a member of \(S\), which is obviously a false positive. Therefore, we need another Bloom Filter or couple of Bloom Filters to represent the combined information of each dimensional attribute to reduce the error rate.

​ The ideal MDBF produces a false positive only when all of the basic Bloom Filters yield false positives, so the error rate of an ideal -dimension MDBF is: \[ f_{iMDBF} = (f_{BBF})^l = (1-e^{-\frac{kn}{m}})^{kl} \] ​ To achieve such false positive rate, we need not only store the attribute of each dimension, but also have to store the relationship among all dimensions. One way to do this is adding a combined Bloom Filter to represent the combination of each attribute, which is called combined multi-dimension Bloom Filter (CMDBF). The question is how to represent such combined information. A simple solution is using the result of XOR different dimensional attributes’ hashing indexes as the hash index of the combined Bloom Filter, which is \(CBF[h_{1,i}[x_0]\oplus h_{2,i}[x_1] ... \oplus h_{l,i}[x_{l-1}]]=1\) for \(i \in \{0, 1, ..,k-1\}\), where \(CBF\) refers to the combined Bloom Filter, as illustrated in Figure 3. 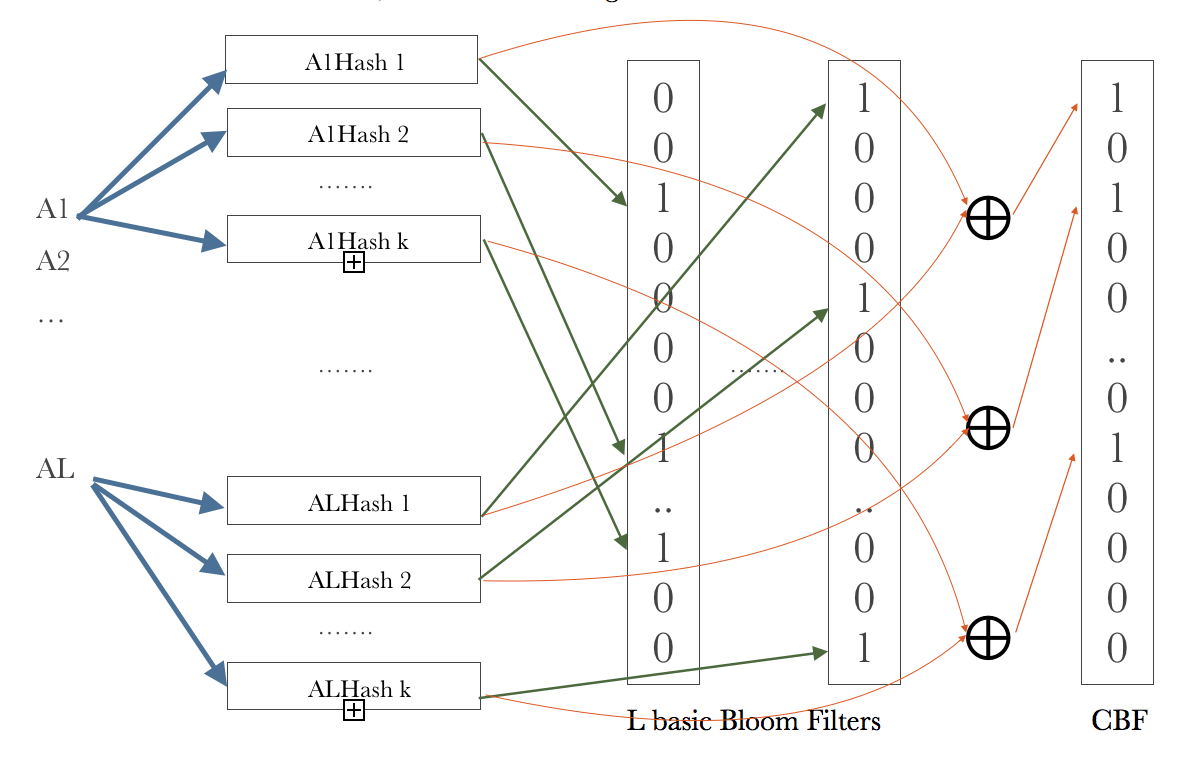 ​ Even though the combined multi-dimension Bloom Filter consumes more space of a m-bit array, it can represent the multi-dimension elements as a whole entity rather than represents it as many independent attributes, which contributes to a lower false positive rate significantly.